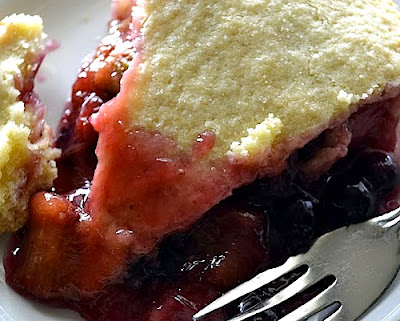 Who doesn't love pie? More importantly, who doesn't love pre-made pie crusts? Just roll 'em out, fill, cover and bake. What could be easier? I know there are "purists" who insist on lard in their crusts (and I agree). But, guess what? (Am I using too many questions for this blog?) Most pre-packaged pie crusts are made with lard. That's why they're so good.
Anyway, I wanted a pie and I wanted it fast. But I didn't have enough berry ingredients. On hand were a few stalks of rhubarb, a half-filled large container of strawberries and some leftover blueberries. I put them all together and created what I now call a RHUBERRY PIE! You have to try it! Let me know if you do? It's my FAVORITE pie!!!

If using pre-made crust, sprinkle with a bit of flour and roll to fit a 9-inch pie plate.

Be sure fruit is rinsed and DRY (rinse the berries the night before and allow to drain/dry. If you don't have time, put whole berries in a salad spinner). Place in a large bowl, mix together the sugar, flour, cinnamon and just a few sprinkles of allspice. Mix to blend. Add berries and carefully blend.

Pour into pie shell and dot with tiny pieces of butter. Roll out top crust. Cover pie. Tuck under edges. Crimp and flute. Cut air vents** and bake in a 425-degree oven for about 40-45 minutes until juices just begin to flow.

*For large stalks of rhubarb, I peel them first. Slice lengthwise once or twice and then dice. For large strawberries, I slice in half and then into thirds.

**Why do some pies have a latticed top crust? (There I go with the questions, again!) It's science. The open structure allows the steam to escape so the filling is less watery. When the pie cools and you slice it, it isn't runny. But who has time to labor over a woven lattice? Solution? Simple. Cut about 4-5 one-and-a-half-inch circles in a circle around the center of the top crust. This looks kind of neat and allows plenty of steam to escape. Take the scraps and artistically place them on the top crust, securing with a bit of water on the underside. Cut out the holes before you place the top crust on the pie.