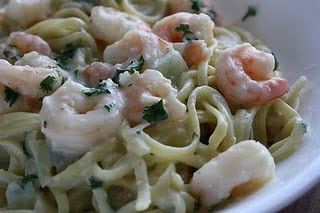 It's rare that I don't "tweak" or change a recipe. But this unadulterated shrimp recipe by Dave Lieberman is superb as is. And it's pretty simple, too. Unlike an "Alfredo sauce," it doesn't use cheese, just cream. The only thing I do differently is to sprinkle each plateful with freshly-grated Parmesan cheese. For 2-3 people, I usually half the recipe but use 3 cloves of the garlic.
Beef is now so expensive, it's actually cheaper for me to purchase one-half pound fresh shrimp in-the-shell from the seafood counter at my grocery store than to buy a New York strip steak. Look for shrimp that is already "deveined" and "cut" so all you have to do is peel off the shell. It's important not to overcook shrimp. As soon as it turns a bright coral color, it's done.
Cook the pasta in a large pot of boiling, salted water until "al dente," about 7 minutes. Drain. Toss with a bit of olive oil to prevent it from sticking while preparing the sauce.
In a large skillet, combine the cream, wine, garlic, and black pepper and bring to a simmer over medium-high heat. Reduce to medium heat and simmer for about 10 minutes until the sauce thickens. Now add the shrimp and cook, about 3-5 minutes, depending on size of shrimp, just until they turn color. Toss the sauce with the pasta and the chopped parsley. Sprinkle with Parmesan cheese and, for garnish, a lemon wedge. (Purists would never add cheese to fish.)
Now, how easy was that!?

Notes: I usually begin on the sauce before I begin the pasta. Sometimes it takes longer than 10 minutes to thicken up. And sometimes I just make it real real slow adding a bit of extra cream and wine now and then to get it nice and thick. If it gets too thick, you can just add a bit of the hot pasta water after you make the pasta. Sometimes I add just a bit more garlic right before I add the shrimp. This is quite versatile. When you add the shrimp, go ahead and add some halved grape tomatoes and cut up fresh basil instead of the parsley.


If you like this recipe and for more tips about making the sauce, check out the following recipe:  Kitchen Bounty: salmon with shrimp sauce over pasta
*If the shrimp are unusually large, slice down the center. It keeps the shape intact but makes it easier to eat.

Posted by Kitchen Bounty at 9:12 AM 0 comments