Thanksgiving is, without a doubt, America's most iconoclastic celebration and holiday. Even now as the ripe age of 70 looms just ahead of me (2022), I still remember, with excitement, creative grade-school projects redolent with construction-paper, scissors, crayons and Elmer's Glue as we re-created Pilgrims and Indians. Hats. Feathers. Turkeys. Pumpkins. Corn. Dried leaves. Acorns. Old wooden desks on old wooden floors. In beautifully constructed red-brick buildings.

Oh, the nervous eagerness of sitting on the bus with one's Thanksgiving creation to show one's mother! A work of art! ART! And then visiting relatives to whom to show it off!!!

As a child, I was obsessed with anything  Native American. I read every book I could lay my hands on in my meager, small-town library.

Of course, much was idealized. Truth be told, what saved those scrawny, ill-and-silly prepared Pilgrims from starving to death back then was not a turkey or pumpkin pie (sorry, no sugar back then for pie, let alone butter, even milk). Instead, it was a dude called Squanto who spoke English who had been abducted as a slave and sent to Europe before returning. He told them what crops and how to to plant them in this new world.

More importantly, Squanto taught them how to catch eels.

Yes, it was eels that saved those scrawny white people from the East.

In the foodless-producing "R" months that extended well into spring, eels hibernated in mud banks of rivers and creeks. It was Squanto who taught them how easy it was to catch them. No gun. No arrow. No knife. Hands and bare feet were all one needed. And a very warm disposition in freezing waters.

Eels were abundant. I mean really abundant. Today, rivers as far west as Indiana are named after them. And, they were easy to dry and to smoke for future months when provisions dissipated and there was nothing else to eat. The protein bars of their time, they also lent themselves to simple stews and soups.

Yes, eels should be a part of every Thanksgiving celebration. Along with shell fish. Oysters and clams were also abundant on the seashore. Even children could "hunt" for them. The coveted "meat" at that first Thanksgiving was not turkey. It was venison. And water fowl: duck and geese. Since my father hailed from Long Island, smoked eels was a treat I still remember when we visited as children.

Every family has a favorite Thanksgiving recipe, which includes stuffing (more on that in a later post). For me and my family, this "green jello" recipe is a staple. I have no idea when it first appeared on our family table. But, for every Thanksgiving thereafter, it was required. Period. It became a part of our history and family memory. 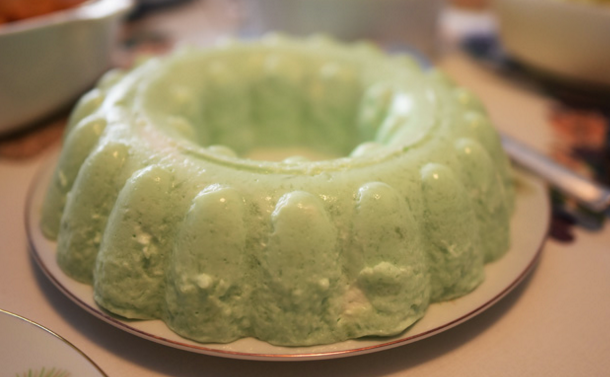 I have no doubt, whatsoever, it's popularity was dependent on the culinary technology of its time: Tupperware!

Tupperware, named after Earl Tupper, was all the rage in the 60's. Stay-at-home housewives could, like Avon representatives, have a kind-of career that was not-so-much outside the home-- but inside--with an entire captive and burgeoning suburb culture as neighborhood customers.

Tupperware was plastic. It was cheap. It was stylish. More importantly, for the moms of baby boomers, it did not BREAK! When my mother died and we emptied her kitchen, I was still kind of shocked to see how much Tupperware she had saved. And that included the all-important "jello mold" (below) whose sacred use and decorative tops was basically used only for this recipe. 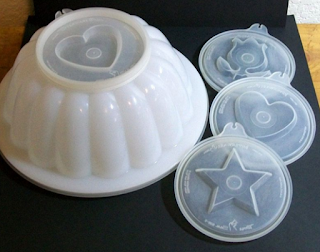 I still see people using the Tupperware measuring cup below.  My mother's was so old, one could barely read the red measurements that had been worn away since the 1970's. Once it was white. Most, have now yellowed with age. I now wish I had salvaged it if only for nostalgia, certainly not its utilitarian advantage. 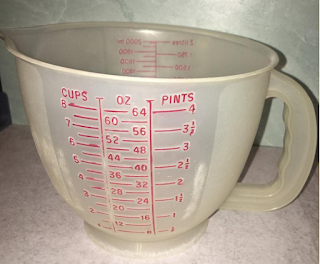 So, the other day, (and the real reason I am writing this blog) is because I read an article that tried to argue Thanksgiving was bad and it left a negative carbon footprint:

Whatever. Like I said, I'm pushing 70. My time on this planet is limited. If young people want to "de-colonize Thanksgiving because its "narrative" is "harmful," so be it. Good luck with that kind of future and with what you replace it. But, for as long as I am alive, this Pilgrim is celebrating, without any apologies, and that includes time-honored recipes from my family history.

I cherish the story of Squanto and the Pilgrims uniting under the necessity of food. A feast that blended friend and foe. Mr. Tupper came to the aid of many a suburban housewife. American capitalism and ingenuity made him wealthy. Yes, my education was Norman Rockwell-ish. I loved it. I make no apologies for it. It was what it was. My father worked very hard to provide for all us. Including my grandparents.


This recipe is also known as "Sea Foam Salad." Cool Whip is a "modern" addition. It was not available "back then." We always used real whipped cream. Mash the pears to a consistency you prefer. With the advent of "stick blenders" this is now an easy step. It is important to have the cream cheese at room temperature. If not, nuke at 10-second intervals until softened.


Drain the liquid from the pears into a small saucepan. Bring the liquid to a boil. Remove from heat and stir in Jello powder until dissolved. It is not necessary to have the full amount of liquid called for in the Jello instructions.
Beat cream cheese until smooth. Slowly add in the Jello mixture and mix until smooth and blended.
Cover. Place in fridge just until partially set, around 40 minutes.
In the meantime, place pears in a bowl and mash to a consistency you want. I like smooth with the added texture of a few pear bits still left in. An immersion blender makes easy work of this but do not mix the final product with it or you will end up a zillion tiny bubbles.
If using fresh whipping cream, beat until stiff peaks form.
Remove gelatin from refrigerator, lightly mix with a fork. Blend in the pear and whipped cream/topping until well combined and the color is homogenous.
Pour into a lightly greased mold. Refrigerate until set, usually overnight.
When ready to unmold, dip the mold in warm water for a few seconds to loosen the sides. Invert onto a platter. Hold your breath and pray it easily slides out.
Garnish as desired.
One year I used both lime and raspberry jello. First I put down a one-inch layer of the red jello into the mold I was using. When it was completely set, I added the lime/pear mixture. It was gorgeous when unmolded.


Interested in making an eel stew: check out the video below: