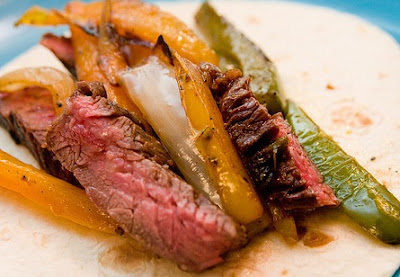 Apartments in North Carolina are not allowed grills on porches. How sad and miserable is that? When I lived in the Midwest, summer was all about grilling. Even winter! Let me count the ways I miss a grill beginning with this flavorful recipe. Nothing can replace a grilled, charred, smoky piece of meat flavored from wood or charcoal--even gas.
I love home-made marinades, especially if they require refrigeration overnight, since the messy part is already done when it comes time to cook or to grill. This is such a recipe. Go ahead and slice the onions and peppers the night before, too. This is for 2-3 pounds of skirt steak. Half it for 1-2 pounds.
Skirt steak is a less expensive cut of beef (if there is such a thing in today's inflation-ridden world). You can sub flank steak, which is a bit more tender, thicker and wider. But, skirt steak, which has a bit more fat,  is known for its beefier flavor. Both tend to be on the tough side, so do not cook either until well-done. You want medium rare or rare. Thus, both do well to be marinated for tenderization. And be sure to cut against the grain with a very sharp knife.
When preparing the marinade, I suggest going easy on the salt since soy sauce already has plenty. If you don't have liquid smoke on-hand, go ahead and add a bit of smoked paprika (or add it in addition to the liquid smoke). My preferred soy sauce is Lee Kum Kee, found at specialty or Asian stores. Even World Bazaar. It has no comparison to bland super-market brands. Cumin can be powerful, so less is better than more. Or leave it out completely. I usually do.
When this is served, people often rave and prefer just the meat. Keep that in mind. And do garnish with a flurry of freshly-chopped cilantro!

Mix all the ingredients (except meat) in a bowl. Taste and re-season if necessary. Place skirt steaks in a 13x9x2 glass dish (not metal) or large plastic bag. Pour the marinade over meat and cover/seal securely.   If using a plastic bag, be sure to place on a pan or plate to catch and leakage should it occur. Refrigerate overnight. Turn meat several times during the marinade process to ensure uniform coverage. If you don't have time to marinate over night, allow about 2-3 hours in the marinade at room temperature, but overnight is best.


ONION AND PEPPER GARNISH
Use any combination of red, green, yellow or orange peppers.  I do not recommend commercially, pre-sliced peppers from the supermarket since they are often treated with preservatives and very very wet.

In a small bowl or measuring cup, mix the soy sauce, water and lime juice. Cover and set aside until ready to use.

Peel and thinly slice onions--then slice each round in half. Slice peppers lengthwise into thin strips and then cut strips in half. Toss into a large bowl and cover until ready to use.


1. Fire up the grill. When hot, cook meat over medium-high or indirect heat heat until done. I prefer indirect. Remember, you want it rare, medium rare. Do not overcook! Flip after 3-4 minutes. Start checking for doneness after seven minutes.

2. Meanwhile. . . drizzle a bit of oil in a large pan. When hot, add the onions and peppers. Cook just until tender and onions begin to soften. You can do this on the grill or in the kitchen. Add the soy sauce mixture and allow to cook down a bit. Remove to a bowl.

3. Remove meat to a cutting board. Cover with foil and allow to rest for at least five minutes. Using a sharp knife, slice into thin strips against the grain at a 45-degree angle.

*Since writing this recipe, I now substitute any recipe that calls for  "red pepper flakes" or  "Cayenne Pepper" with dried Aleppo Peppers. Not always easy to find, they are so worth the search and effort. They will give you a kick, but not as intense or crazy. And they carry great flavor like a quality ground pepper.

Posted by Kitchen Bounty at 6:16 AM 1 comments