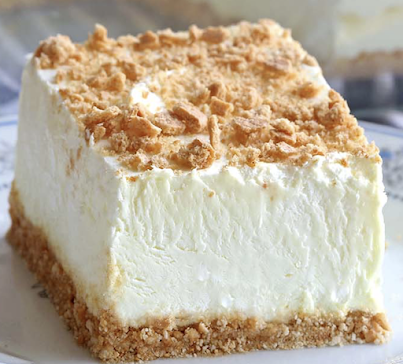 America is known for its diners, soda fountains and, when they reigned, department-store luncheonettes.

Sadly, this epoch of Americana has all but disappeared. Some, like Woolworth's, are simply gone forever.

I'm from NW Indiana, a stone's throw from Chicago. I well remember luncheon and soda fountains at such grand department stores as Marshall Fields and Carson-Pirie-Scott. Incredible businesses that grew with major American cities. They are now defunct. Carson's was my favorite because they had a small "ice cream shop" that served incredible ham sandwiches and chocolate shakes the likes I could not get in my small Indiana town.

This particular cheesecake was a popular dessert at Woolworth's lunch counter in the heyday of its success. It is simple to prepare. For many it is a nostalgic dessert as they do, indeed, still remember it.

Like all "urban-legend" recipes, it is difficult, in not impossible, to pin down the exact ingredients nor the exact method or way it was prepared. First off, no butter was used in the crust. Lemon juice was not added and rather than use whipping cream, whipped evaporated milk was used. The gelatin of choice was Royal brand, not Jell-O.

I really would not classify this as a "cheesecake" in the strictest sense of the word. It has no eggs. It's more like a mousse ... thicker than a pudding, but not quite dense as a cheesecake. Still, it is worth making for its ease and flavor. It is quite light. And it has survived the test of time!

The original recipe calls for one can of evaporated milk that has been chilled and whipped. That makes sense since it would have been cheaper that actual whipping cream and would have been easier to store for commercial use. Today, not so much. As such, most people simply use whipping cream. I never suggest Cool Whip. There is no need to sweeten the cream or evaporated milk. Here is a tip from someone who actually made this at Woolworth's:

I worked at Woolco . . . and made this exact
cheesecake every week. We always kept evaporated milk in
the freezer and would take out on the day cheesecake was to
be made, so it could soften, but not defrost completely,
in a semi frozen state. We didn't use lemon juice. And added
vanilla to the cream cheese and sugar mix, and chilled it for
hours before incorporating into milk and jello whip. --J.L.--
Interesting, but I do not suggest you do the same. For one thing, the can will explode. Second, companies do not recommend it and freezing will cause it to separate. Instead, open the can and place in freezer for about 30 minutes before using to get it good and cold. I use this quote as an example of how difficult it is to find exact specifications for an older, urban-legend recipe.
The original also did not call for butter or sugar in the crust. Why pay more? The graham cracker crumbs were simply scattered on the bottom of the pan, quick frozen, and the mixture very carefully placed over the top.  This could be the reason recipes do not call for pre-baking the crust. Me? I suggest you use the butter. It's just easier and, really, there is less waste. Baking it to set up is your decision.

Made in large oblong pans, it was always proportioned as a generous square. Could you substitute different flavors of Jell-O? I do not know, but I don't see why not.

Most recipes call for a 13 x 9 pan. You will have to decide. Square? Round? Thin or thick filling? If you deviate, you will need to adjust the crust measurements.

To sum up, Woolworth's made an effort to serve a great dessert at a great price by utilizing judiciously-priced and great-flavored ingredients.

At the end, I have posted Miss Lori's video from Whippoorwill Hollow over on You Tube and her wonderful  recollections of Woolworth's and how she makes this dessert. Follow whichever method/tips you prefer. Please note, her newspaper clipping recipe is for a much larger version and goes mostly by the "pound" of ingredients.

And, yes, I well remember "five-and-dimes" as a kid. A quarter went a long way back then--you could buy five peanut butter cups! FIVE!

Some notes to consider: Lessen water to 3/4 cup for a firmer cheesecake. As noted above, the original did not add lemon juice. Some add a bit of vanilla. It's your call.