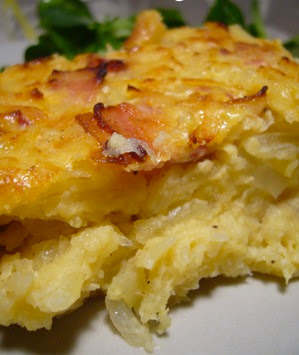 Kugelis, or potato pudding, is a traditional Eastern-European dish. It is considered the national dish of Lithuania, a place of origin on my mother's side of the family who settled in Chicago. It is classic, inexpensive peasant food that sustained generations with the simplest ingredients one would easily find in agrarian, rural and poor communities: potatoes, onions, milk. One must imagine that, at one time, the addition of meat must have been a luxury saved for special occasions and holidays. And a sign of moving up in the world.

Recipes are varied. Some call for milk, flour, even Farina and sugar. Most call for bacon--and lots of it including the grease! Most require anywhere from 5-10 pounds of potatoes. After going through many recipes, the one I've come up with below is streamlined for today's smaller portions/families. The "clean" version uses cooked ham and it's the one I actually prefer.

To make it easier to grate potatoes, cut in half or in quarters so they fit comfortably into your hand. Use Russets. Also try to use "older" rather than "fresher" potatoes; older potatoes have more starch and aren't as "wet." You want somewhere between a “grate” and a “shred.” Sorry, your Cuisinart really just won't work. Kugelis should always be served with generous portions of sour cream and/or applesauce.

Leftover Kugelis is wonderful for breakfast. Simply slice and quickly fry in a bit of butter. Great served with fried eggs! It's also a snap to nuke in the microwave to warm it up.

As a child, the appearance of a Kugelis was always a matter of celebration. I hope the same will be true for your own children.

Preheat oven to 450 F degrees. Generously butter or spray a one-quart baking dish. It's important for Kugelis to be about 1.5-2 inches in depth, so use an appropriate dish or pan.

If using bacon, cut up into dice. Saute lightly and add 1/2 cup chopped onion until bacon begins to brown and onion is soft. Set aside. If using ham, add the raw, grated onion to the grated potato mix.

Peel potatoes. Grate. Put grated pulp (and onion if using ham) in a sieve over a bowl and jiggle out most of the juice but do not discard it. You should have about 2 cups of grated potato.

After about 5-10 minutes, drain/discard potato juice being careful to keep the white potato starch that has settled to the bottom (If you are a bread maker, keep the potato water to make bread.) Return starch to the grated potato. Mix in. Add the eggs. Stir. Now add the the warmed condensed milk. Add flour or Farina and baking powder. If using bacon, add the bacon-onion mix, including the fat. Mix well. If using ham, add along with herbs, if using, and salt/pepper. Be careful with salt since bacon and ham can be quite salty already, but potatoes do take a lot of salt.

Pour into greased casserole dish. Pat with the back of a wooden spoon to create a rough-textured surface (this creates a crispier top). Don't be worried if mixture appears too "wet." Bake in a 450 hot oven for 15 minutes. Reduce heat to 350 and bake for another 30-45 minutes until firm and top is golden. Cut into squares to serve.


*Add a little at a time. You may not need it all, especially is you're adding bacon/onion mixture. You want the batter thick, not soupy.
**Farina is preferred over flour. If using flour, try to use less, not more, or the kugelis will become pasty-like (but it's still good!).

Note: For either the bacon or ham recipe, you may add 1-3 tablespoons of sour cream to the batter. Some people like their kugelis on the moist side; others on the dry side. I often use a ham steak or a thick slice of deli ham. I don't like it chopped or diced. Instead, I slice it thinly and randomly like one would a slice of ham and then rough-chop it. 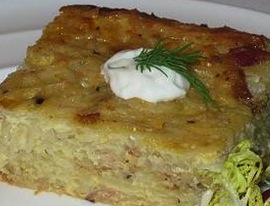 Kugelis is a very forgiving recipe. With the addition of ham or bacon and a side salad, it's a meal on its own.

Posted by Kitchen Bounty at 6:56 AM

This is exactly how I make mine and it always turns out so good! My grandmother used to grate 10 lbs. of potatoes by hand and she would bake it in a huge roaster pan, but she was cooking for a small army. I like this pared-down recipe for my own small family.