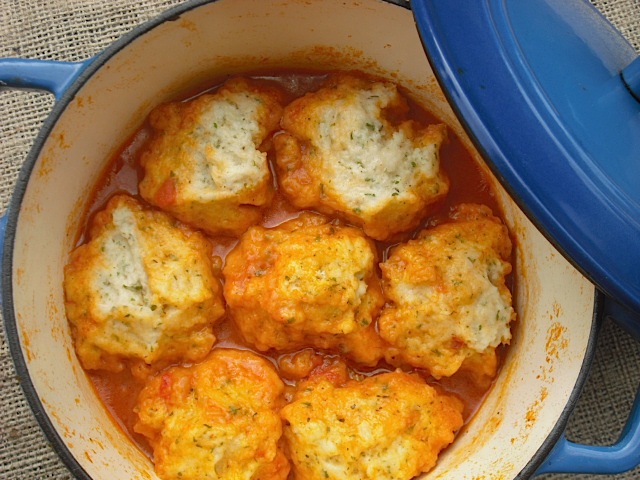 A can and a pan. It's amazing what one can create with those two items!

I had intended to make a small pork roast with this dish, but the stewed tomatoes with the fluffy dumplings turned out to be a meal in itself. This could easily feed several adults. Next time, I may just add some white beans and more stock.

This is one of those recipes that is versatile and adaptable. A bit of spinach or kale? Go ahead. Perhaps some chopped bacon? Why not? And certainly a sprinkle of cheese.

Tomatoes and dumplings was a popular Depression Era dish. I used canned tomatoes and cut them up using kitchen shears. I can't wait to use a mixture of summer-fresh, vine-ripened tomatoes.

For the fluffiest dumplings, use White Lily Flour if you access to it; otherwise, use cake flour or a combination cake flour/all purpose flour. The recipe below made seven, light wonderful dumplings. It's important to remember that when making dumplings, they will absorb the juices from the stew, hence the importance of adding some stock. 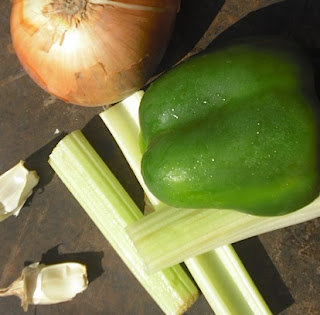 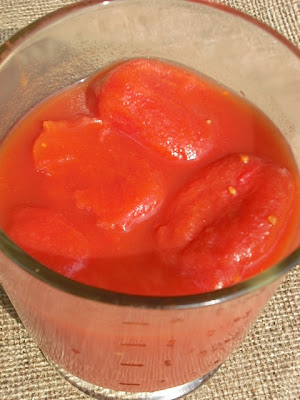 Melt the butter in a heavy-bottom pan. Add the onion, green pepper and celery. Cook until softened. Add the garlic and cook for about 30 seconds. Add the tomatoes and their juice, the brown sugar and, if using, the allspice. Bring to a slow simmer and cook partially covered for about 30 minutes, adding stock as needed. Taste and season with salt and pepper (if you like things a bit spicy, add a bit of Tabasco Sauce)


(Before making the dumplings, cover the stewed tomatoes and make sure it is on a medium simmer. Dumplings cook by "steaming.")

In a medium bowl, mix the dry ingredients. Cut in the cold butter and lard using a pastry blender. It doesn't have to be perfect. Stir in the milk and mix just until blended. Add the parsley.

Uncover tomatoes and drop six to seven large spoonfuls of batter onto the surface of the stewed tomatoes. Cover the pot and allow to cook for 10-15 minutes. They will almost double in size as they rise and puff out. They are done when a toothpick inserted into the center comes out clean.

This was even better the next day!

Notes: I added a slice of smoked bacon to the stewed tomatoes as they cooked and then removed it before adding the dumpling batter. I also used Self-Rising White Lily Flour but still added a bit more baking powder.

Posted by Kitchen Bounty at 6:51 AM 2 comments