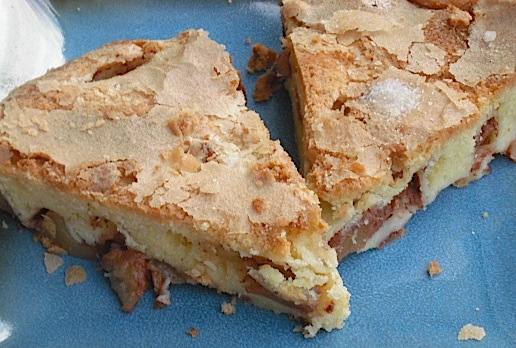 This simple, buttery apple cake is from the Richard Sax' cookbook Classic Home Desserts: A Treasury of Heirloom and Contemporary Recipes from Around the World, published in 1994.  It is called "Ligita's Quick Apple Cake" and of it he says:

"Stick a bookmark right here, and leave it in. Sort of a 'quick apple pie without the crust,' this cake has become one of my all-time favorite, most-often made recipes."

That's quite a claim. That, and the quirkiness of the recipe, convinced me to give it a try.

Sax says it's not necessary to brown the butter once it has melted, but it does add a certain richness to the cake. Use a quality butter, such as Plugra.

Think of this as a large butter cookie with apples. Or a a huge apple doughnut. Sax insists "it wants vanilla ice cream." Perhaps. But a good cup of tea or fresh-brewed coffee is just as wonderful.

I ground 4 fresh allspice berries to add to the cinnamon. Next time, I will omit the lemon juice and add a bit of vanilla extract instead. I used two large Honey Crisp apples and one Granny Smith. They were just beginning to get a bit soft, so I sliced them thick.

Toss the apples in a bowl with the lemon juice, 2 tablespoons of the sugar and the cinnamon mixture. Spread apples evenly in the buttered dish.

Melt the butter in a small saucepan over medium-low heat; cook until lightly golden, about five minutes or so. Watch carefully to avoid burning. Pour the clear, browned butter into a bowl, leaving any sediment or foam in the pan.

Stir the 3/4 cup sugar into the butter. Gently stir in the eggs; stir in the flour until blended. Spoon the batter evenly over the apples and spread into a layer. Sprinkle with the remaining 1 tablespoon sugar mixture.

Cool in the dish on a wire rack. Cut into wedges and serve from the pan warm or at room temperature, with vanilla ice cream, if desired.