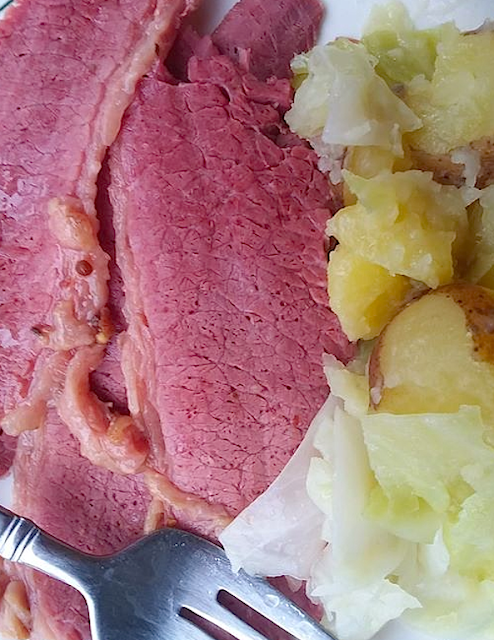 Through the years, I have prepared corned beef in the crock pot, in the oven, and on top of the stove. While I love the flavor of a corned beef in the crock pot, it often produces a roast that is fall-apart overdone and next to impossible to thinly slice. I have done the 3-3-3 oven method: three cups of water, three hours, at three-hundred degrees. But it really depends on the size of the corned beef. I mostly prepared corned beef in a large pot on top of the stove, slow simmered, periodically testing it for doneness by poking it with a fork. That's fine, if I'm home and have the time. All three methods suffuse the house with an aromatic, St. Paddy's Day flavor.

This year, however, I did mine in the Instant Pot. And, by far, it produced the nicest corned beef. It was flavorful (crock pot virtue) without falling apart. It sliced absolutely beautifully! It was tender and juicy. I prepared three. The one below is the one I liked the best. And it's the simplest.

For the first one, I added celery, potatoes, carrots, onion, garlic, and beer. I used the obligatory spice packet. The result was a corned beef that was a bit bitter as were the veggies. And I should have used more dried spices.

For the second, I only used one onion a large garlic clove, and the enclosed spice packet. It was okay, but it still lacked that St. Patrick's Day punch of flavor.

For the third, (pictured) I used no veggies at all. I doubled the dried spices. I added one large clove of garlic. And I reduced the amount of liquid. It was bliss.

I prefer my cabbage and potatoes "clean," so I boil them separately. 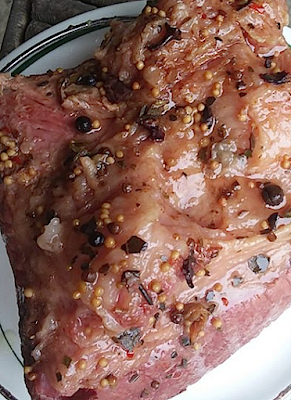 For warmed-up leftovers, I made latkes, or potato pancakes. They paired remarkably well with the beef.

*I use McCormick Pickling Spice (you may need to visit a few stores before you pickling spices.) 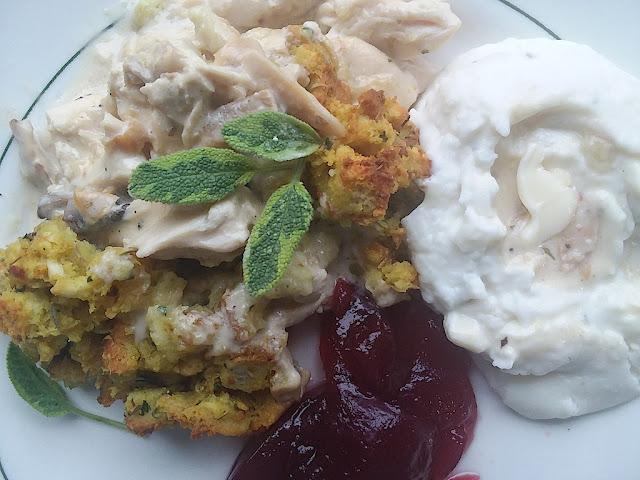 Somewhere in my memory, I remember eating such a delicious and savory casserole as this. It was like Thanksgiving in a pan. Just prior to this recipe, one week, to be exact, I thought I had found it. I was so excited that I got too carried away and made all of what you see below. Unfortunately, it was in vain. The ingredients were certainly there. Countless brushes and tubes of paint, like ingredients, does not a great artist, or cook, make.

After some thought, I re-interpreted what I thought were the mistakes of the recipe and added different-but-similar ingredients. Voila! I created this recipe. I loved it. Add a bit of cranberry "anything" on the side, a bit of sweet potato or mashed, and it's Thanksgiving any time of the month. And without all the fuss. I can't imagine anyone turning his nose at this simple, everyday feast.

As casseroles go, this certainly fits the definition. Comforting. Easy. All-in-one. Generally inexpensive. Little cleanup. If, however, you are one not inclined to be limited by definitions and, say, verge on the side of complexity, even a tad, you are still in luck. Feel free to include simple ingredients, such as some chopped onion and celery in a bit of butter with pork sausage to add to the stuffing mixture. Trust me, it's worth cleaning that extra pan. And don't forget this recipe around Thanksgiving. Leftover turkey will work quite well. Oh, and it is kid-friendly!

Some do's and don'ts: Do not crisp the stuffing mixture. You want it moist, so keep a loose sheet of foil on top. Do not over-dilute the Alfredo sauce. Do not skip the extra Parmesan cheese, even if it's out of that famed "no-no" green can. Do strive to keep an even ratio between the chicken layer and the stuffing layer. Too much chicken and you lose the great flavors of the stuffing. Of course, one could be bad and just double the stuffing layer. And, yes, I have thought about it. Decisions such as those, on a casserole level, are usually decided by one's budget.

This is more of a process than a recipe. It results in a 11 x 7 pan of cozy deliciousness. Oh, and it freezes well, so you may want to make two.

Lightly grease an 11 x 7-inch pan or dish. In a medium bowl, toss the chicken with a bit of the Bell's or poultry seasoning. Add about a tablespoon or so of the Parmesan. Spread in the bottom of your casserole dish.


In the same now-empty bowl, combine the Alfredo sauce, sour cream and milk or cream. Mix. You still want it a bit thick, but not too liquid -like. It should be a bit thinner that mushroom soup from a can. Spread on top of the chicken.


Wipe out sauce bowl. Empty contents of stuffing mix into the bowl. Add some Parmesan to your taste. I like to add a bit more Bell's. Add wet ingredients. Cover and allow to sit several minutes to thicken.

Spread by tablespoons on top of the chicken/sauce mixture. 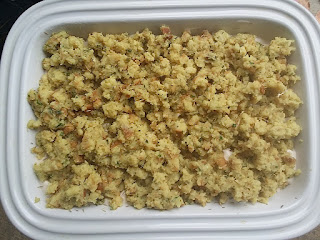 Bake in a 350-degree oven for about 30 minutes. Tent loosely with tin foil. Remember, all the ingredients are basically already cooked. You just want to warm everything through until bubbly.

Cool ten minutes before serving. Makes great leftovers--if there are any.


Note: Stove Top Stuffing mix and jarred Alfredo sauces are often on sale or BOGO. That's when I stock up.

Posted by Kitchen Bounty at 6:18 AM 0 comments


The most difficult part of this recipe is finding the cherries. The next most difficult part is paying for them. They will not be cheap. A simple fifteen-ounce can of tart cherries will set you back at least five bucks! I have seen them as high as seven! But, for a dessert with multiple servings, five bucks is, after all, pretty economical.


This recipe is based on my peach cobbler; except, I use cherries. It is important not to make this too sweet. The first time I made it, I used a bit of cinnamon and allspice. It is best to just leave it alone and let the cherries do the talking. But, do add a few drops of almond flavoring. The topping of slivered almonds looks nice but is not at all necessary.

As you can see from the picture, this is not a "true" cobbler in the all-encompassing fruitness of cobbler definitions. It borders more on the unfortunately-named "dump-cake."  But it is easy to prepare and the buttery cake-like interior pillows the tart cherries beautifully.

Don't even be tempted to use canned pie filling.

Preheat oven to 400 F. Have your batter ingredients measured and ready to go.

Drain cherries but reserve the juice.

Place cherry juice, sugar, and cornstarch in a small pan and bring to a slow boil over medium heat. Cook until juices thicken to a kind of syrup. Remove from heat. Add the cherries and almond extract. 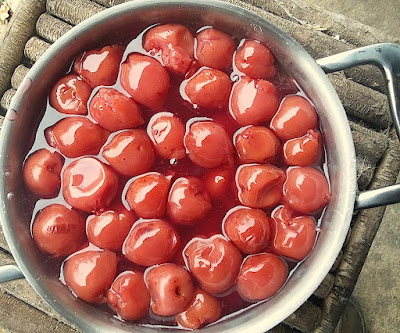 Place butter in an 11 x 7-inch baking dish and place in the oven to melt. You want the dish hot, so don't skip this step.

Prepare the batter. Mix all ingredients in a medium bowl whisking until smooth.

Remove dish from oven and immediately pour in the batter. The melted butter will be displaced and seek the edges. Don't worry. Now, using a spoon, strategically place the hot cherries and syrup evenly over the batter.

Sprinkle with the reserved two tablespoons of sugar. If desired, sprinkle with slivered almonds. Return to oven and bake for 25 minutes. 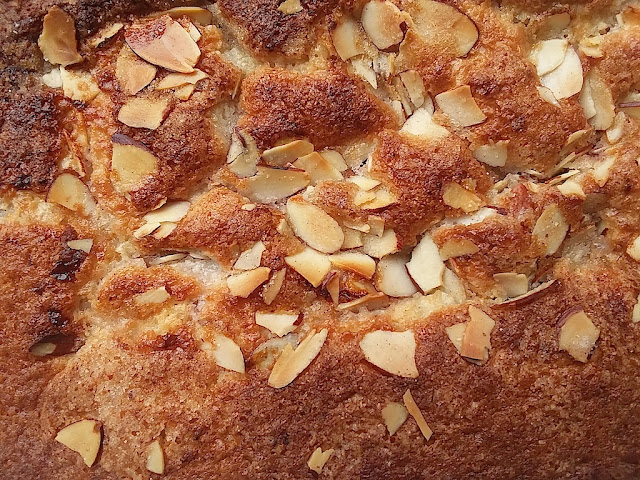 Posted by Kitchen Bounty at 6:16 AM 0 comments