Cube steaks are economical and versatile. They don't carry much on the flavor side, so they lend themselves to creative interpretation. And ingredients.

Here, they are the vehicle for "Philly-style" ingredients of onions, peppers, mushrooms and cheese. I used a sharp Provolone. I have also used a mild Havarti jalapeno (Boar's Head brand). The surprise ingredient is the salami. Don't omit it. A few slices of paper-thin hard salami add a lot of flavor to otherwise insipid cube steak. 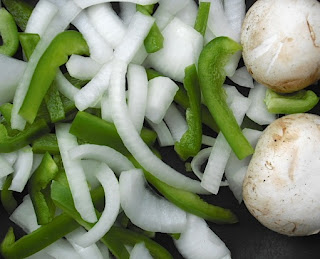 Have your deli cut the number of pieces of salami and cheese you will need. It's fresher and less expensive.

The first time I made this I only used enough veggies to cover each cube steak. On subsequent trials, I increased the amount to be able to serve some on the side which I now prefer. Feel free to add yellow, orange and/or red peppers. I usually pick up what's cheapest. If you like heat, add a jalapeno or similar hot and spicy pepper.

Season the cube steak with seasoned salt and pepper. Dredge in flour. Lay aside. 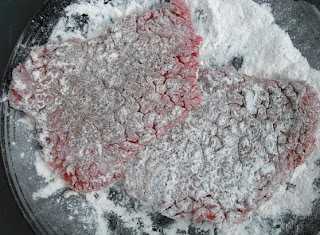 Sautee onion and pepper in a bit of olive oil and a tad of butter over medium-low heat. When they begin to get soft and turn a bit brown, add the mushrooms and 1/2 teaspoon salt. Sautee until mushrooms begin to get soft and release their juices. Add garlic and just stir until fragrant.  Stir. Remove pan from burner and place vegetable medley onto a plate. 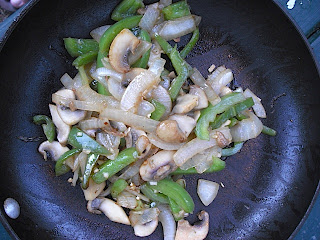 Add a bit more olive oil to pan and when hot fry cube steak. (I was really bad and fried mine in some bacon grease I had saved in the fridge.) When juices appear on surface, flip. When juices appear on second side, it's done. It doesn't have to cook all the way through since it will bake in the oven for a bit.

Remove cube steak to shallow oven-safe dish or just keep in the pan you used. Cover with two slices of salami. Cover evenly with pepper/onion mixture. Place additional mixture around it. Bake at about 350-375 F degrees, uncovered, for about ten minutes. 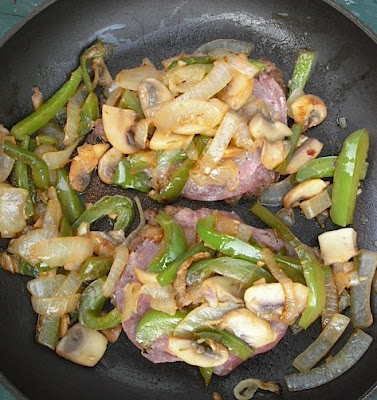 Remove from oven and cover with cheese. If desired, sprinkle with paprika (I prefer the smoked paprika). Return to oven until cheese is melted, about a good five minutes. Allow to cool a bit and serve.


Notes: One thing I learned from working in a deli with hardened New York Italians for customers: the only way to eat hard salami is if it's sliced paper thin. It really does make a difference. The slice is buttery and seemingly melts in your mouth. Thicker pieces can be chewy.

Posted by Kitchen Bounty at 7:58 AM

What temperature do you put your oven on?