Potatoes are unassuming in their appearance but gracious and generous in their bounty and versatility. Nothing could be truer than the sweet potato. 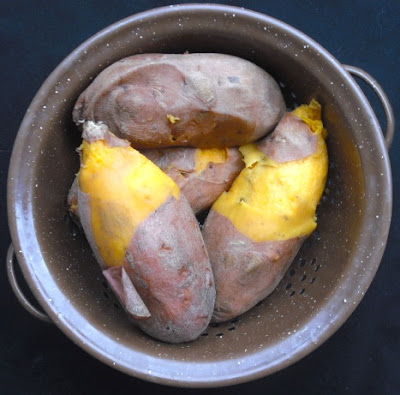 I never had sweet potato pie until I moved to North Carolina. It's not quite as sweet as pumpkin pie and I prefer it over that old stand-by. I looked over several recipes and put together one I thought I would like. It was good, but it needs some more experimentation. Still, the pictures came out grand.

My recipe had 1/2 cup melted butter. I thought it a bit excessive but went with it. It ended up making the crust too soggy, by one main complaint, and by the end of baking some had risen to the top of the pie which I absorbed with a paper towel. Next time, I will only use 1/4 cup and maybe I will pre-bake the shell a bit before adding the filling. I'll use three eggs next time, not two, to give it volume and I will increase the amount of the dry spices. I used one tablespoon of rum which gave a great taste.

At the last minute, I decided to put the mashed potatoes through a sieve for a smoother texture. 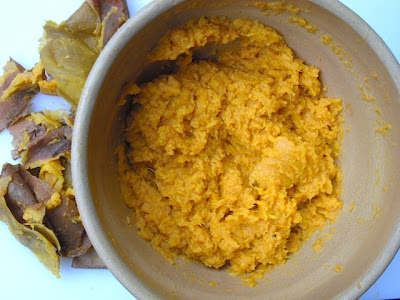 I've read that baking the potatoes gives a better texture and taste than boiling. I may try that, too. 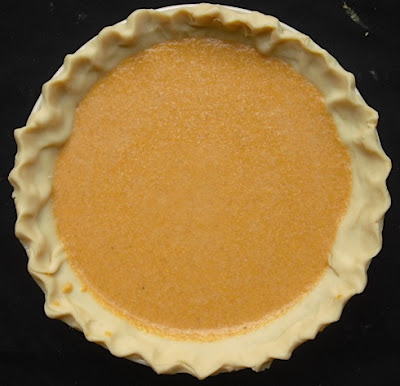 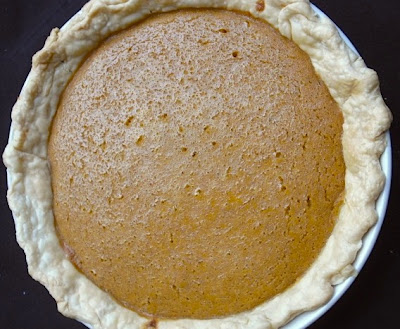 Boil potatoes until soft when pierced with a knife tip or fork. Drain. When cool enough to handle, remove from skin. It will peel right off. Mash or put in a food processor and/or  work through a sieve.

Roll out pie crust and fit into a nine-inch pie plate. If it's a bit smaller, that's even better. Set aside or pre-bake for about 15 minutes. Set aside.

Add mashed sweet potatoes to a large bowl and mix with the butter until fluffy. Whisk in the eggs. Add the evaporated milk and whisk. Add sugars, flour, spices and vanilla. Whisk well. Taste and re-adjust seasonings if necessary. Add the rum and mix.

For mixing, I used an old-fashioned hand-held rotary beater.

Pour custard mixture into pie shell and bake in center of oven for about 45 minutes or until set. Allow to cool completely. Top with whipped cream.

Notes: I've read where it is not a good idea to prepare the mashed sweet potatoes ahead of time and then refrigerate since it creates a "watery" pie. Just saying . . .

Posted by Kitchen Bounty at 5:13 AM 0 comments