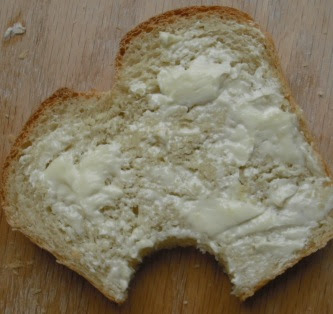 When sliced supermarket bread began to hit the three-dollar mark, I hauled out my old bread recipe and began making my own loaves. A bag of bread flour is only four bucks. If I make only two loaves a week, that's a considerable savings. Artisan breads are even more expensive!
Rapid-rise yeast makes an easy go of the whole process and if you've never attempted to make bread, it's really not at all complicated and a great weekend project. It's also a great excuse to use all those nice bowls you have tucked away in the cabinet---oh, you know what I mean! You will need one good heavy one to allow the bread to rise. Sorry, but I don't do bread machines.
I've made many, many bread recipes through the years, and this is the one I've settled on. It makes a nice loaf that slices thin, so it's great for sandwiches, and it's particularly great for toast. The egg yolk gives a nice "crumb" and texture to this loaf. 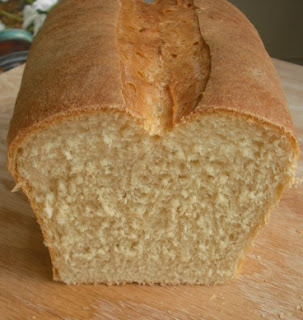 Everyday Bread
Makes one loaf*
(To make two loaves, increase yeast to 3 teaspoons with 1/2 cup warm water, increase water to 1.5 cups, double butter, and honey but be careful of the salt. Use about 7 cups of flour.)
Preheat oven to lowest temp. Turn off and keep door closed.
Measure out the flour in a separate bowl.
Combine the yeast mixture in a one-cup glass measuring cup. Stir to dissolve yeast and place in the warm oven. This is "proofing" the yeast. If it's "alive" it will begin to bubble and froth. When it reaches the one-cup mark, remove.
Meanwhile, microwave the one cup of water until hot. In a large bowl, add the butter, honey (or brown sugar) and salt. Pour in the hot water and stir until butter is melted. Set aside for it to cool a bit. You want a temperature of about 90 degrees. Taste. Saltiness should be in the foreground with a hint of honey in the background. When warm, whisk in the egg yolk. Now add the yeast mixture. Stir.
To the yeast mixture, whisk in about one to one-and-a-half cups of flour until smooth. Cover with plastic wrap or towel and place in the warm oven until the mixture doubles in size and is bubbly. This is called making the "sponge." After about 30 minutes, it should look like this: 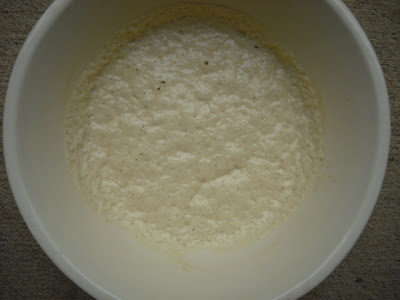 Now begin mixing in the rest of the flour one-half cup at a time and until the dough becomes difficult to mix in and flour begins to cling to the sides of the bowl. Scrape it out unto a floured surface and begin to knead. It will be sticky and you will have to flour it. The goal is to try and not to use any more of the 4.5 cups of flour that you originally measured in the bowl.
Knead for a good 10-15 minutes. To knead dough: fold in half towards you and then knead/push with the bottom or heels of your hands. Give it a one-fourth turn, fold in half again towards you, and knead. Sprinkle with flour as needed and give another 1/4 turn.
The dough will tell you when it no longer needs any flour because it will just begin to stop sticking and become elastic and firm and smooth. After about 10-15 minutes, it should look like this:
Lightly grease a large, heavy bowl (I use olive oil). Place your dough ball in and then turn upside down so the greased side is now up. Cover with a towel or plastic wrap. 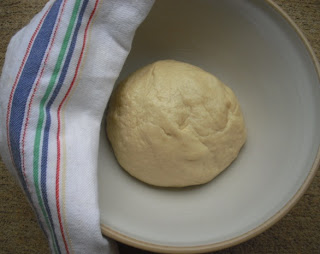 Place in the warm oven. If necessary, preheat the oven on warm while kneading the dough then turn off. Yeast needs a warm, not hot, environment to ferment. If too hot, the yeast will die.
After 30 minutes, the dough will have doubled. Gently, go around the bowl and fold the sides inward to deflate. If necessary, put a bit more oil on top. Cover and return to warm oven to double yet again. After 30 minutes is should be double and leave an indent when you fingers are pushed in it: 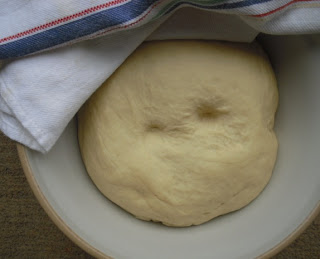 Meanwhile, grease your loaf pan. I used lard. It makes for the best crust: 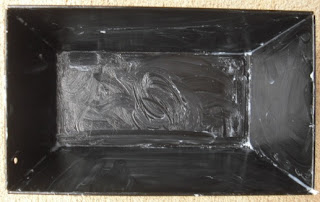 I don't think anything should be "punched" and that includes dough. Many call for "punching" down the dough. Don't. You want those little air bubbles. Remove the dough to a floured surface. Gently begin forming into a rectangle, the width about as wide as the bottom of the pan you are using: 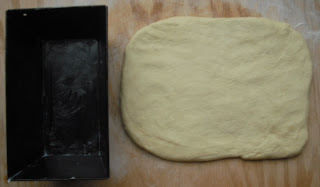 Fold one end to the center, and then the other: 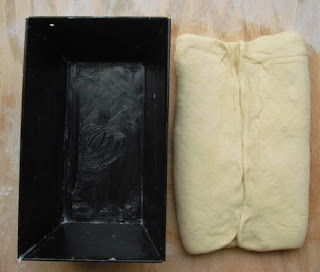 Pinch the seams a bit and then begin to form into a roll by folding again and keeping to the size of the pan: 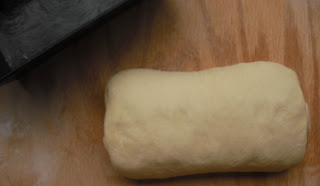 Pinch the side seams closed and place in your greased bread pan. Cover and place in warm oven until it doubles in size and is even with the top of your pan. Remove from oven and with a sharp knife or razor blade, make a 1/2 -inch slit down the center. Meanwhile, pre-heat the oven to 350 degrees.
Place bread pan on center rack and bake for 30-35 minutes. The top will be golden brown and sound hollow when tapped. If not sure, remove the bread from the oven and  gently tilt out the bread. Using an instant-read thermometer, insert in the bottom of the bread (you want to keep the steam in the bread--poking a hole in the top allows the steam to escape). You want a reading of 200-210. If not done, simply re-insert bread and bake more as needed.
Your loaf should go from this: 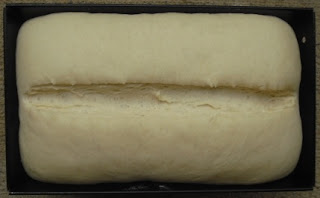 to this:
Remove the loaf and place on it's side across the pan to cool: 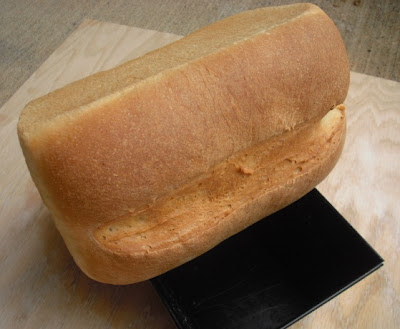 As tempting as it is, DO NOT cut and allow to cool for at least 30 minutes. Cutting into a fresh loaf of hot bread allows the steam to escape and will create a dry texture.
Once it has cooled, slice away and enjoy! When it is totally cooled, it will be easier to make thin slices. 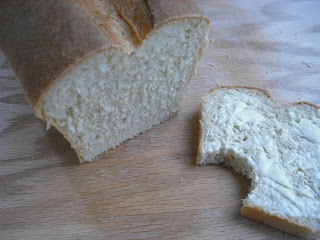 For the time being, simply put the bread cut side down on a plate. Once it has completely cooled, store in plastic wrap. I just use an old plastic bread sleeve.
When my grandmother retired, she took cooking lessons at this cooking school in downtown Chicago:

A few decades letter she gave the cookbook to me:
It is from this cookbook that my mother makes a family tradition: "Oysters a la Rockefeller." But that's another recipe and another blog.
(c) Gary T. Czerwinski 2010

Click below to watch 93-year-old Clara make bread like they did from The Great Depression. It's an interesting recipe and technique:

Posted by Kitchen Bounty at 8:30 AM 0 comments