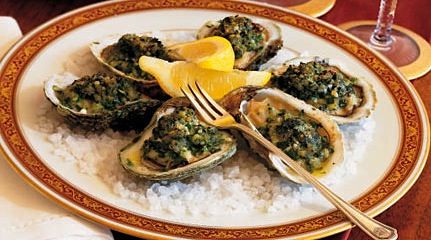 
Way before there was a Julia Child, there was Francois and Antoinette Pope; she was French, he was Italian. And they both hailed from Chicago, home to my grandparents and mother.
The Popes were the "foodie" celebrities of their day and opened their first cooking school in the Windy City in 1930 where, quite literally, they taught generations of Chicagoans how to cook. Their first cookbook appeared in 1948. Their first cooking show, "Creative Cookery," appeared on the tube in 1951 and enjoyed an incredible 13-year run. "The French Chef" didn't appear until 1963! Think about that!

The Pope cookbooks had one underlying theme: class. But without being pretentious. Entire sections were devoted to "chafing dish" recipes; "party-style" molds, including a host of "chaud-froid" variations; tons of appetizers; cake decorating and vegetable "carving"; and entire menus for cocktail parties. Still, they included many recipes for simple dishes, such as hot dogs. Long before Jeff Smith's incredible cookbook "The Frugal Gourmet" appeared, their cookbook had already included chapters on both Italian and Cantonese cooking.

Even today, their recipes hold up remarkably well.

When my grandmother retired from Sears Roebuck in downtown Chicago, (she was one of the first women to use what was then considered a computer), she attended cooking classes from the Pope school, including candy making (I have that cookbook, too). When her cooking skills waned, she gifted me her autographed copy of "The New Antoinette Pope School Cookbook." I've since learned that signed copies fetch a couple-hundred dollars. Alas, sadly or happily, mine is in poor condition from constant use. But my grandmother's inscription to me is priceless.
And, yes, I still make a pretty good loaf of bread . . . 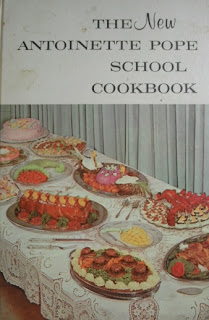 My mother also had the Pope cookbook. When she died, I grabbed it. You would think two of the same cookbooks would be enough. Nope. Recently, I spotted an edition "in good shape" on the Internet and ordered it. If you have a favorite family cookbook, I suggest you do the same. Order a "working copy" to better preserve your family copy. Mine is held together with rubber bands and memories.
Now, on to those oysters!
My father hailed from Long Island, New York, so oysters were nothing new to him. But, for a  Midwestern family on the shores of Lake Michigan, their appearance at holidays was intrigue. My father aptly demonstrated how to "shuck" them, complete with East-Coast stories of his younger years and my by-gone, distant relatives. Oysters Rockefeller have now been a Thanksgiving and Christmas tradition at our house for several decades. This year, my mother has told me she ordered 60. We served them with ice-cold Spumante.

This year, I won't be home for Christmas. Instead, I will be at my sister's home and we have decided to introduce the tradition to her children. We are fond of saying that people who don't like oysters will change their minds when they try these . . . thanks... to... Francois and Antoinette Pope... a woman from Chicago... and a man from Long Island!

This dressing may be prepared several days in advance and kept in refrigerator until ready to be used; then let it stand in room temperature until soft enough to spread, or beat until of spreading consistency.

(NOTES: One 10-oz. box of frozen, chopped spinach, thawed and squeezed dry is about 1/2 cup. The most tedious part of this recipe is chopping the parsley. One large bunch is about 1/2 cup. Do not use the stems. I place in a mini-prep to do most of the work and then transfer to a cutting board to finish mincing. I cut the onions by hand; putting them in a mini-prep only makes them gelatinous. I use garlic powder instead of garlic salt. I just about double the amount of cheese. After adding the Tabasco to the melted butter, taste and add more to suit your preference. I make my own bread crumbs in the mini prep and then toast them in the oven.)

Scrub oysters well with a brush under cool-running water and keep cold until ready to shuck.

Shuck oysters and place on half shells in a baking sheet that is filled to top with rock salt (ice-cream salt). This stabilizes oysters to keep them from tipping. Bake in a 450 degree oven for about five minutes or until edges of oysters begin to curl. Remove from oven and quickly spread 1 tablespoon Green Butter Dressing over entire surface of each oyster. Return to oven and bake about 5 minutes longer.

For genuine Oysters Rockefeller, the oysters should not be allowed to brown; they should be served rare. However, they are more palatable to many people if placed under the broiler for a few minutes to become crisp.
*This is probably the most difficult part of the recipe. My grandmother grew her own curly parsley in borders around her house. We just stuck to it. Parsley is NOT easy to chop finely. It makes a mess, so be prepared. A food processor really does not work very well. Years ago at an antique market I picked up a Flintstone-version of a food processor made in France. It is called a "Mouli." If you ever see one, grab it. Nothing grinds herbs or parsley like this little wonder. Some countries are now reproducing them. But I never found one that comes close to the original.


Notes: If oysters are particularly difficult to open, place them for several minutes in tepid water. They may be opened a few hours before cooking. Keep covered with tin foil in refrigerator (we keep them in the cold garage).

Posted by Kitchen Bounty at 6:33 AM 4 comments