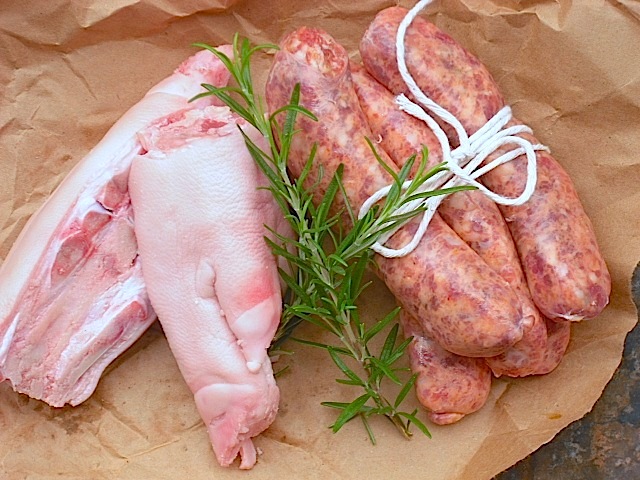 (2021 Update: Weather we like it or not, we eat according to the times in which we live. Right now, those times spell doom for meat. The price is through the roof. Enter spaghetti. It has always been a savior's meal to tough times on the pocket book. Sausages are economical. More and more grocery stores are putting out cuts of meat never seen before because they are cheap. Pig's feet is one on them. Cheese is not cheap, so try to find it on sale. The other day one my favorite grocery stores had pasta on sale for one dollar a box, a real bargain. I bought five.

I recently purchased a new cookbook: "ODD BITS" recipes for the rest of the animal "head to tail." There is a chapter devoted to nothing but feet--from chickens to cattle. Ox-tail used to be considered an "odd bit," but it became so trendy that I recently saw a package for over 20 dollars! Hopefully, the price of pigs' feet won't make us squeal.)


I had been eyeing the packages of little piggy feet (trotters) for several days at my local Food Lion Supermarket. For an authentic Italian "gravy," they are indispensable. But not easy to find. So I purchased a package of four for less than four bucks and a nice package of Italian sausages to prepare a simple, basic sauce or "gravy."

A pig's foot adds richness to a tomato-based sauce. If ever you've wanted a thick sauce, the pig's foot is what you're after. The pig's foot is very gelatinous (not fatty). After hours of simmering, it lovingly melts into the sauce and melds with the the other meats to create a deep, rich and unctuous sauce.

Look for trotters that are pink and flesh colored. They should have little or no smell. After a good wash, bring to boil in a pan and simmer 5-10 minutes. Rinse again and then slip them into your sauce to simmer for 2-4 hours or until tender and falling apart.

Feel free to add any meats to your sauce. I settled for the sausages and made some quick meatballs* that I add the last hour or so. This is probably the best spaghetti I've had.


In a large pot, add a bit of butter and olive oil. Add onions and sweat just until they turn brown. Add the fennel seeds. Stir. Add the crushed and diced tomatoes. Rinse cans with a bit of water (or wine) and add. Slice/chip garlic cloves into sauce. Add pig's feet and sausages. Dust with pepper and stir. Cover loosely and simmer for 2-4 hours.

The last hour, add the brown sugar, chopped rosemary and oregano and, if using, meatballs. Taste for seasonings adding salt and pepper as needed.

Remove and discard pig's foot (Some people pick the meat off, but there isn't much. After 3-4 hours of simmering, it's pretty much given up whatever it had to offer to the sauce. It may also leave behind tiny chips of bones, so beware.)

Serve over pasta of your choice with a liberal grating or shavings of cheese. 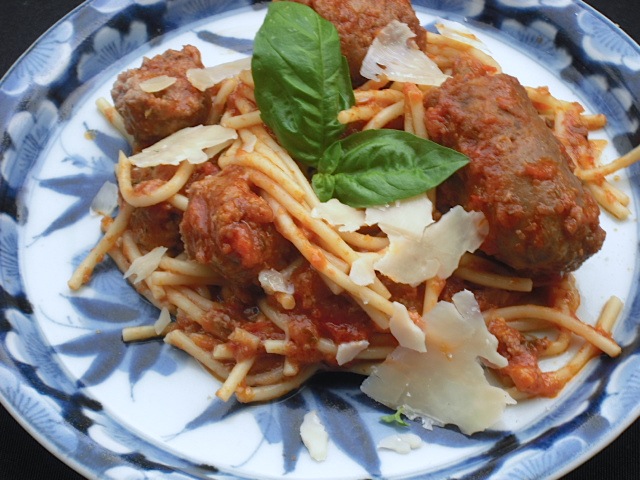 Notes: I used Tuttorosso brand crushed tomatoes with basil. You could complicate things and add green pepper and celery to the onions. My sausage was mild with a bit of heat. If you want a spicier sauce, add a pinch or two of red-pepper flakes to the onions.

This is a mild-tasting and satisfying dish. The tomatoes are neither overpowering nor acidic. I give it five oinks! 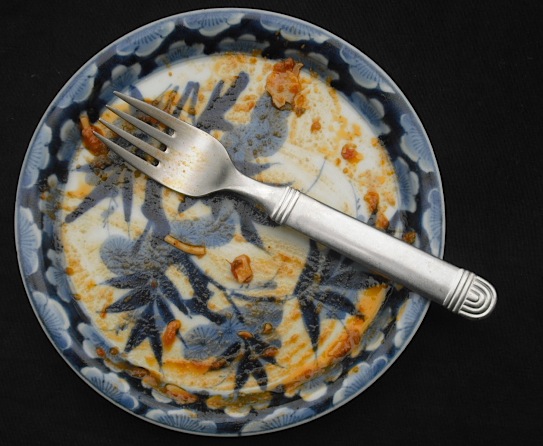 Update: Wow. I've now made this several times. People who eat it want more, more, more. This is Italian "gravy." It is not a marinara sauce of just tomatoes. There's a world of difference between the two. The amount of tomatoes you use will depend on the amount of meat you add. The more meat--the more tomatoes. Start with a balance and go from there.

* Okay... A meatball is not just a meatball. It all depends on how and in what you are going to serve it. I no longer use egg in my meatballs. I use Ricotta.

Posted by Kitchen Bounty at 7:04 AM 1 comments