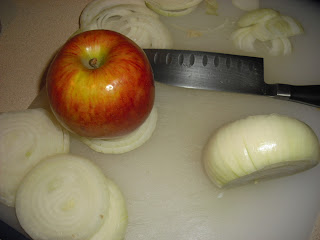 A regional classic featuring apples, onions, herbs and bacon. A great accompaniment to ham and pork. I like it cold, too.

This recipe is adapted from my Grandma’s old cookbook. It sounded so whacky I had to try it. It’s almost a meal in itself and the first time I made it I almost ate all of it. I suspect it’s an old recipe with ingredients that were cheap and which most housewives would have had on hand.


Peel and slice onions thinly, about 1/8 inch. I used yellow sweet onions. Peel and core apples and slice into rings. I've tried using "chunks" but it doesn't work as well. Thin slices of apple "rings" work best and look the best when layered with the onion. You may choose to keep the skin on for a more festive look and use a red and green apple.

Cut bacon into smaller pieces and sauté/fry until crisp. Remove with a slotted spoon to drain and cool. Add the bread cubes to the bacon “renderings” to coat. Remove to a bowl. In the same pan, add chicken broth, a pinch or two of dried thyme or rosemary (or both!). Bring to a boil and reduce to a bit less than 1/2 cup.

Butter a 1.5 quart glass-baking dish. Arrange the apples, onions and bacon in alternate layers. Pour in the broth mixture. Cover the top with the bread cubes.

Cover the dish and bake in a 375-degree oven for about 25-30 minutes. Uncover it and cook for another 15 minutes longer.

Notes: It's important to have crisp apples. If the apples are soft, they will cook before the onions. You want everything the same texture.

Posted by Kitchen Bounty at 10:21 AM 3 comments