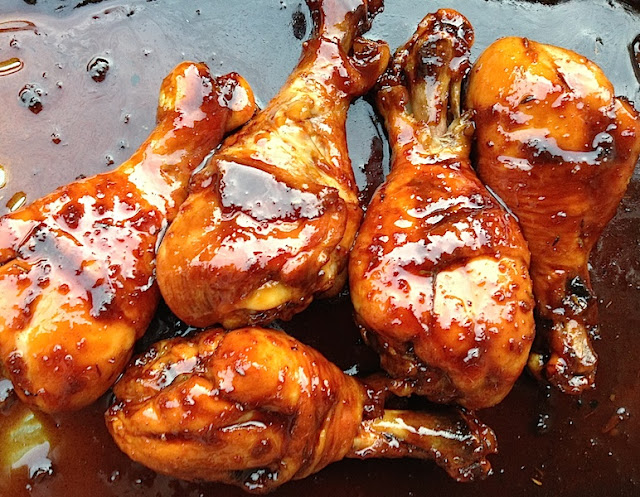 (I've now made this recipe too many times to recall and have made the following modifications which are now included in the recipe. Since I'm dealing with honey, cooking temperature has been a concern. I like the original higher temperature of around 400 F., but it's not enough time for the sauce to properly caramelize. Dial down to 350 F, and it's not high enough. I've found that 365 F is perfect.

Chinese Five Spice, I've decided, along with Cayenne, makes the sauce, and so I've increased the measurements along with most of the others, including the amount of chicken legs.

It's important to baste the last 20 minutes or so. If you want your sauce a bit more loose, add a tablespoon or so of liquid. I've used orange juice and whiskey with success.)


Chicken legs are still one of the best buys and this recipe could not be simpler.

One could certainly vary this marinade. Ketchup instead of vinegar will result in a lovely mahogany color. If you have an aversion to salty foods, use reduced-sodium soy sauce. Personally, I use Lee Kum Kee.

Be sure to baste these babies while cooking.

Bake in a 365 F degree oven, skin side down and bake for 20-25 minutes. Turn skin side up and bake an additional 20-25 minutes, basting several times as the marinade begins to thicken. If the sauce becomes too thick, add a tablespoon of liquid, such as juice from the orange or whiskey. If you'd like a darker skin, place under broiler for a few minutes, watching constantly until darkened. 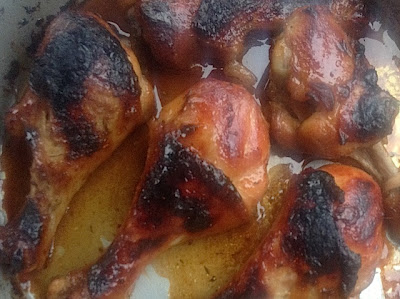 Posted by Kitchen Bounty at 10:27 AM 0 comments