The five ingredients for Thanksgiving? Turkey. Cranberry sauce. Sweet potatoes. Pumpkin pie. Stuffing. Some might add green-bean casserole and, if you are one of those unfortunate souls, I shall pray for your culinary redemption.

We all grow up with a "stuffing." My grandmother did rice stuffing. I grew up with the traditional, American favorite of pork and sage. Some prefer fruit stuffings. I do not like the addition of fruit to my stuffing. My feeling is that if one wants fruit, make it as a sidedish. Fruit in stuffing can be overpowering and not everyone likes it.

Stuffing at the turn of the last century had more to do with economy and stretching a meal, I believe, than in gastronomical feats. Hence, locality dictated ingredients. If you lived on a coast, stuffing was made from oysters and rice. In the Midwest, apples and fruits. In the South, sweet potatoes. Urban areas used chestnuts and dried fruits, such as prunes. Pennsylvania Dutch used potatoes. Older cookbooks usually had a section reserved just for stuffings which then were called "dressings." Recipes ranged from "Potato and Celery Dressing," to "Liver Dressing."

You don't have to use dried bread, but dried will soak up the stock when you add it. Finding dried bread cubes can prove difficult, but a good grocery store will often stock them made from their own bread. Packaged, seasoned bread "chips" have many unwanted ingredients, including fructose corn syrup.

Use turkey stock, not chicken broth, to make your turkey stuffing. Add the rinsed neckbone and giblets with a bit of carrot, celery and onion to pot and just cover with water. Simmer for a few hours and use that liquid to make your stuffing and your gravy. Or buy a package of turkey wings or turkey necks and do it that way. If you need to "stretch" your stock, then add some canned chicken stock.

Because of fears of bacteria, it is no longer recommended one actually stuff the bird. Usually, the bird is finished cooking before the stuffing leaving behind bacteria that has seeped into the stuffing. It's important to take the temperature of both the bird and the stuffing. Stuffing is done when an instant-read thermometer reads 150 F. degrees.

Stove Top Stuffing sells over 60 million boxes of the stuff (sorry, couldn't resist) every Thanksgiving. And with good reason. It's good. Add your own turkey stock and some sausage, and it's even better. And the quality and consistency is, well, consistent, and it's something our taste buds have grown up with. But for the holidays, I prefer to keep corporate blends behind as much as possible. I'll start from scratch.

The recipe below is sufficient for a half dozen people. You'll want to double it for more.


It's important to have everything diced, cut weighed and ready to go. You'll be using pots and pans and bowls, so have your counter and kitchen cleared of clutter before proceeding. I weighed the bread cubes, onions and celery to be more accurate.

Using the largest bowl you have, add the dried bread crumbs, poultry seasoning or Bell's and the Parmesan cheese. Mix through.

Add just a bit of olive oil to a 12-inch skillet and brown the sausage, breaking it up as it cooks. I use a pastry blender. When done, remove to a separate bowl. 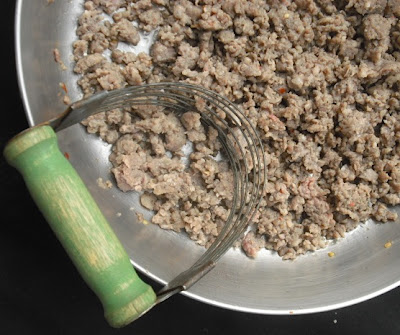 In the same pan, melt the six tablespoons of butter and add the onions and celery, cooking over medium heat until tender and opaque and just beginning to turn brown. Add the garlic and stir through just until fragrant and scraping up brown bits from bottom of pan as you go. 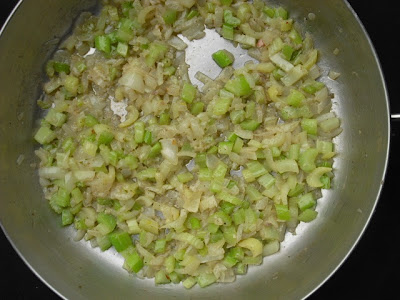 Add cooked sausage to onion/celery mixture and mix through. Add salt and pepper to taste. Add one cup of turkey stock. Remove from heat. Set aside.

In a small bowl, add one cup turkey stock, the eggs, chopped parsley and sage. Whisk until well blended.

Add the sausage mixture into the dried bread cubes, mixing with a spoon and your hand to incorporate well. Now begin mixing in the egg mixture. It's important to mix well.

Now comes the trickiest part when making stuffing. How much more liquid to add? If you are actually going to stuff a bird, you want the stuffing mixture a bit on the fluffy or dry side. If baking, you want it a bit more moist. I ended up using another 1.5 cups of turkey stock. Begin by adding 1/2 cup at a time.

Transfer stuffing mixture to a greased deep bowl or casserole dish. This is the second trickiest part of making stuffing. I prefer a large oven-proof bowl. If using a casserole dish, it will cook sooner and be crispier.

Dot with butter and cover tightly with foil. Bake at 350-400 F degrees F for about 20-30 minutes. Remove foil and continue to bake until crisp and brown, another 15-20  minutes. Remember, it must register at least 150 F degrees on an instant-read thermometer. Chances are, it will read higher and that's fine.

Notes: I added just a pinch or two of Cayenne pepper when I added the sausage to the onion/celery mixture. That's entirely optional.

Posted by Kitchen Bounty at 4:51 AM 0 comments