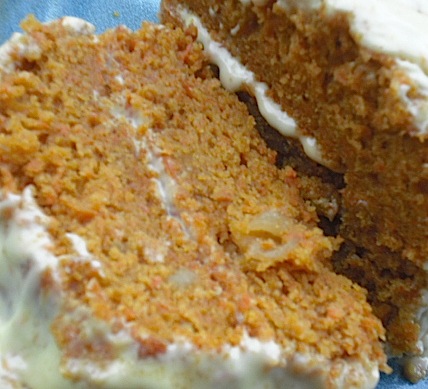 There's just something about this carrot cake that makes people sit up to take notice. Perhaps it's the candied ginger or the surprise of the orange, cream-cheese frosting. I don't know. But whenever I make it and give aways slices, I get comments and notes like this one from my neighbor: 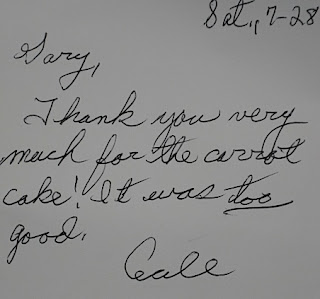 Some carrot cakes are loaded with extra ingredients. So much so, carrots take back-stage billing to coconut, pineapple, raisins, nuts, even chocolate! So when I saw this carrot cake from good-ole gal Betty Crocker I was intrigued. And I love crystallized ginger. But I didn't want just a regular cream-cheese frosting. I thought it deserved a bit more oomph--adding a bit of honey and orange did the trick. 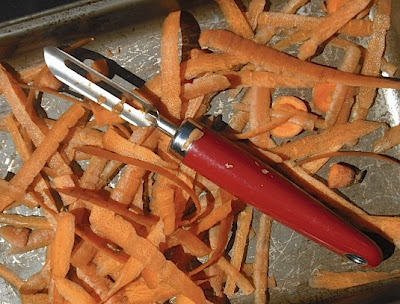 This makes a small cake and is one of many on this site that won't feed a wedding party. I love an 8 x 8 cake. It's perfect for a few people. And if you need bigger, simply make another and stack them. For this, I cut one layer in half and frosted it for a small, double layer which I don't recommend since the frosting is very light and needs to be refrigerated. In the future, I may not even frost the cake at all but add a few spoonfuls on the cake as I cut and serve it.

My workmates pronounced it one of the best carrot cakes they've eaten. The cake itself is very moist and redolent with carrots. The ginger is not at all pronounced. But without it, the cake would be a dud. The orange-honey frosting is, of course, wonderful and the perfect companion to such a simple cake, easily served any season of the year.

Avoid buying "jarred" candied ginger in your spice aisle at the grocery store. It's overly expensive. I buy small tubs of it for a few bucks in the organic section of my local store. It lasts forever. I'm not a fan of using all oil in a cake recipe, so I use part butter and part oil. It makes for a moister cake in my opinion without the greasy taste. Grate your own nutmeg--it makes a huge difference. I also use a combo of white and brown sugar for more taste. 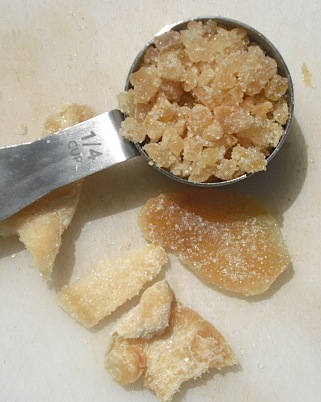 Heat oven to 350 F. degrees. Grease an 8 x 8 in square pan. Cut a piece of wax paper or parchment paper to fit in the bottom. Lightly grease it, too.

Using a sharp knife, begin mincing the ginger. It can get sticky, so sprinkle a bit of flour on it as you go.

In a large bowl, mix everything but the shredded carrots and crystallized ginger with an electric mixer on low speed for about one minute or so, just until moistened. Then beat on medium speed for 3 minutes. Now stir in the carrots and ginger. Batter will be thin.

Bake for 30-35 minutes or until a wooden toothpick comes out clean when inserted. Let rest for about ten minutes or so and remove from pan on a wire rack to cook completely before frosting. Cake will be moist and sticky.

Beat all ingredients together until smooth. Add more sugar as needed. Frosting will be light and a bit runny. Feel free to experiment with measurements. 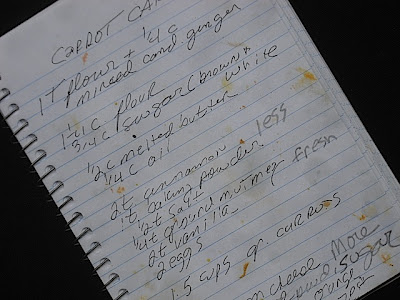 Posted by Kitchen Bounty at 6:46 AM 4 comments

I always get a bit excited when I spy rump roasts in the meat department at the grocery store. It's not the best cut of meat, but I love the grain of its texture and rich, beefy flavor.
I grew up with Sunday rump roasts. My mom would throw one in the oven before we went to church on Sundays. Sometimes, she put it in the oven but forgot to turn it on ... YIKES! She was angry the rest of the day! I don't think she ever used a thermometer ... just time. So, there you go.
You need a thermometer.
I hated Sunday rump roasts. They were tough and difficult to swallow. Chew, chew, chew. My mother hated Sundays ... everyone was home, even my dad ... and she had to cook and clean up. She never got a day off. Pins and needles. When she was angry, she banged around pots and pans, cabinet doors. I think today, that is what we call passive-aggressive behavior.
The leftovers were better, though ... served over grocery store white bread that sopped up the gravy ... and made it all more palpable.

Roasts are more and more difficult to find, (good roasts, anyway, which include pork). Most of what we prepare is already sliced and diced. That's too bad. A roast is one of the easiest things to prepare: just season, bake, slice and serve. And if you have a family, it can go a long way. Leftovers are great for cold or warm sandwiches.

When I lived in Michigan, I had the luxury of choosing between several butchers. The rump roasts were on the tender side and cut with a generous saddle of fat which basted the roast as it cooked. If there were not enough fat, the butcher would give several pieces of suet that I affixed to the roast with toothpicks. The roasts were also uniform in size so they cooked evenly.

If you get your roast in the supermarket, it will be packaged upside down making it difficult how much fat the "butcher" left on it. The more the better. You can always trim it yourself if there is too much--but there never is. Try to choose a roast that is uniform in size. Many are "triangular" shaped which means the thinner parts will cook sooner.

The rub below is enough to use for 2.5-3.5 lb. roast (this is a good rub for any beef cut that you will roast). Remember, the spices only penetrate about 1/4 inch of the meat as it cooks. A roast such as this should be served rare, and cut against the grain in thin, thin slices.
Preheat oven to 350 degrees F.

With a damp paper towel, wipe all sides of the roast.

In a small bowl, mix all the dry ingredients. Rub the olive oil into the roast and then coat with the dry rub.

Place roast on a metal rack in a shallow metal pan/dish. If desired, spread roughly chopped vegetables on bottom

Roast until it reaches an internal temperature of about 120-125 degrees. This will take anywhere from 50-70 minutes. Remove from oven and allow to stand, covered, without cutting for 10-15 minutes. This allows the juices to stop flowing out and settle back into the meat.

Remove roast to a cutting board and cut into thin slices. Sometimes a sharp serrated knife works best. Be sure to cut against the grain of the meat.

If gravy is desired, add a bit of water or beef or chicken stock to the pan drippings and stir over medium heat until bubbly. Pour into a small bowl and serve on the side. I don't use flour ... I like au jus ...
If you added veggies, smash them a bit to release flavor and then remove. Add water or stock, scraping the bottom of the pan. Strain and serve.

Posted by Kitchen Bounty at 6:03 AM 15 comments

First, a diversion. I lived in Saugatuck, Michigan for 13 years where I operated my art studio, Thirteen Hawks. It was also home to Julie Russo of The Silver Palate Cookbook nomenclature. She and her business partner, Sheila Lukins, ran  "The Silver Palate" a sophisticated yet hands-on gourmet shop in NY before an acrimonious split.
Lukins died of brain cancer in 2009, the year I left Michigan. Russo recently retired and sold her beloved posh bed and breakfast, Wickwood Inn, on Lake Michigan.

Anyway, Chicken Marbella, of Spanish/Moorish origin, was one of their signature dishes and, some would argue, most popular recipes from their cookbook. And I do mean "signature." I read so many rave reviews I thought I'd give it a try. I already love my simple Chicken Provencal which I often make. This seemed in the same vein, although I had my doubts about the combinations, but pairing unusual flavors is the cookbook's theme and fame. I'm not a huge fan of green olives; I would have preferred Kalamata. But the dish needed some color and green it was. 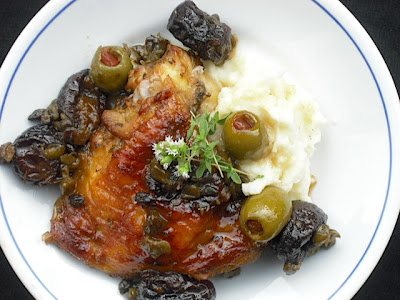 Next time I may experiment a little. I could certainly see (maybe) adding dried apple. And people often sub the prunes with dried apricots (I did but didn't care for it). A splash of Cognac would be interesting. Regardless, the dish really is worth the raves. It's a great play on tastes between the sweet and the savory. The prunes bake sweet and plump having absorbed the complex tastes of the marinade. I served mine with mashed potatoes to make use of the incredible and delectable sauce.
Just be sure to use large, meaty thighs, skin-on, bone-in. Split Cornish Hens would be nice, too, and great for a Christmas meal. The original recipe can easily be found on the Internet (it makes a lot!). Here, mine is halved.
Alas, not even the humble chicken thigh is inexpensive as I update this in 2022. Nor olives (good ones, anyway). Worthy of guests, this is one recipe you need under your belt and culinary repertoire, especially to which to introduce your family.
Mix the olive oil, vinegar, prunes, olives, capers, bay leaves, oregano and garlic in a large bowl or large Ziploc bag. I recommend the plastic bag. Add chicken pieces. Marinate overnight. 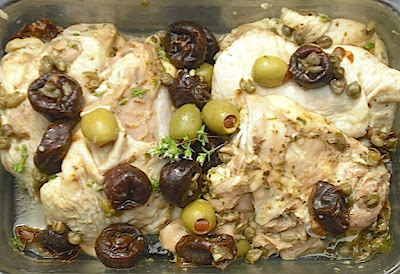 When ready to prepare, add 1 -2 more cloves of minced/pressed garlic. I also added some fresh oregano. Arrange chicken on a heat-proof dish. I used a 10 x 10 shallow pan which worked great. Add all the marinade ingredients, except for the bay leaves. Sprinkle each chicken thigh with some of the brown sugar. Carefully drizzle the wine around the pan. 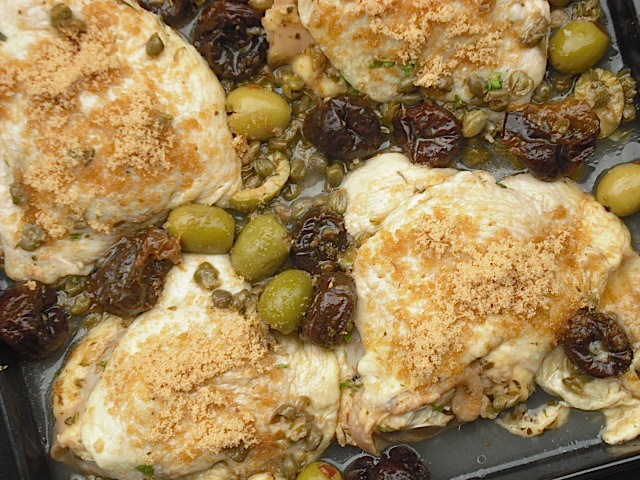 Bake at 350 degrees F for about 40-50 minutes, basting several times with the juices during the baking process. (I raised the heat a bit the last ten minutes to get a nice caramelized crust on the chicken.). Remove from oven and allow to rest 15 minutes.

Posted by Kitchen Bounty at 6:16 AM 1 comments