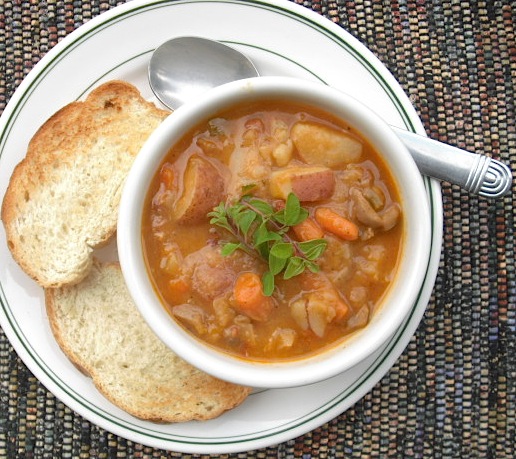 Nothing prescribes SOUP like cleaning our your fridge! I had all the following on hand: 1/2 pack of bacon, 3 sad leeks, celery that had seen better days, a cabbage head, carrots and potatoes which were starting to sprout, two almost-used tubes of tomato paste, some reserved chicken stock. Soup was the logical and forgone conclusion. 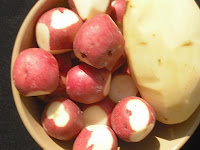 Soups such as these are actually easier to make than a chicken or turkey soup which involves preparing a stock. This one was a knock-out! A real keeper.

Don't skimp on the bacon--it's what flavors the soup. I usually use the center portion or the parts that have the most meat and less fat. Since I had one Idaho potato on hand, I used it as the thickener since it is starchier than the waxy red potatoes. It worked out perfect.

Yes, it's a lot of chopping. Pour yourself a glass of wine. Put on some great music. Chop, chop, chop. Open a window when you saute the bacon to make your neighbors envious  . . .

Don't omit the smoked paprika. It imparts an earthiness at the end one can't achieve with regular paprika - or anything else, for that matter. I had a large slice of smoked hog jowl that I placed on top of the soup as it simmered. I also had the rind from a wedge of Parmesan cheese that I added. If you don't have a rind, just add a slice. It will melt into the soup as it simmers. 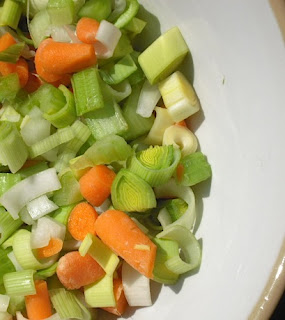 Wash the potatoes. Peel any parts that are sprouting. Cut in half, then cut each half into thirds. For the Idaho potato, peel and cut off the ends; discard. Now cut what's left in half. Split each leek down the center to check for sand and dirt; wash. Then slice.

In a heavy stock pot, saute the bacon until it begins to render its fat, is still pliable, and just beginning to crisp. Remove. Add a bit of olive oil to the pan and add the leek, celery, carrots, onion. Saute until soft. Salt and pepper to taste, being careful of the salt since the bacon has plenty. Move veggies to the side and add some of the white wine to de-glaze the pot of the brown bits at the bottom.

Stir in the garlic, thyme and tomato paste. Cook just until fragrant being careful not to burn the garlic. If necessary, add a bit more of the wine. Add the red potatoes and stir to coat. 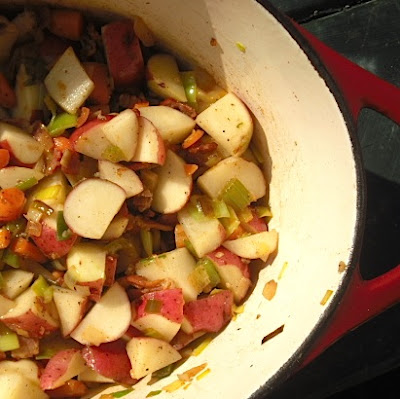 Add the liquids, including the juice from the canned mushrooms. Give a good stir. Add the two chunks of Idaho potato and cheese rind.

Bring to a slow boil. Reduce heat to low and simmer for about 30-40 minutes. The Idaho potato will have softened and begun to come apart. Remove hog jowl (if using) and with  the back of a spoon, mash the Idaho potato against the sides of the pan to thicken the soup. 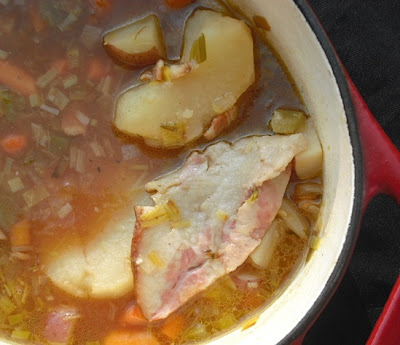 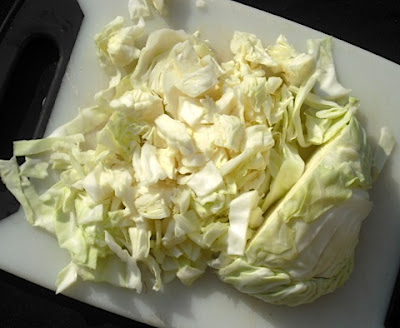 Add the mushrooms and shredded cabbage. Re-cover and simmer another 20 minutes or so. Add paprika last and stir.