My doctor tells me I have a gene that must be very French. Why? My three weaknesses are bread, wine and chocolate. None, of course, diminish weight or waist (or wait and waste!). And good bread needs good butter. Quality butter is not sold in "sticks" like cigarettes. It is sold in a block. A big fat beautiful block of fat! My favorite is, of course, French: "Président." It's a bit saltier than other brands which pairs well with a fresh yeasty-fermented bread. My second choice is Plugra. I avoid Kerry Gold. It's too expensive for what it is supposed to be ... but is not.

Today, many grocery stores bake their own bread not prepared from scratch. Instead, it is baked from dough that has been prepared somewhere else and then frozen and shaped. The destination store will thaw it and proof it in large steam ovens. Then bake it. Easy peasy. Most is pretty good. Very good, in fact. But it will cost you because of shipping!

Some stores bake only a few loaves for just the aroma ... Yes, it's true. Customers go crazy . . . But a lot of bread sold in grocery-store bakeries, which includes rolls, etc., is simply shipped frozen and then put on the shelf to thaw.

The last grocery store I worked for, Publix, actually creates bread from scratch. Now, that is unusual! It results in some incredible bread but, more importantly, it saves on shipping costs! For a while, I was obsessed with my store's rye bread! Because I worked in the deli, right next to the bakery, I could put aside a fresh loaf and have it wrapped in a special bag the preserved the crispiness of the crust! How spoiled was I?

Early in the morning, one could hear bakers slapping the dough against large wooden counters with iron legs. Several times a week, 50-75-pound bags of bread flour are delivered.

A loaf of "artisan" frozen bread is now hovering between four to five bucks a loaf! I don't think so. Even at three bucks, I tend to walk away. I wish they would just sell the frozen dough. Sometimes, if you ask the bakery department, they will sell it to you that way ... but don't expect a discount because you have to thaw and bake it yourself.

Prior to the star appearance of artisan loves of bread in a grocery store, I often made my own!  Seriously, it is not that difficult. I use what is called a "poolish" (rhymes with POO-LEASH) and the work is evenly divided between evening and the following morning, making it less complicated and strenuous. It's a great weekend project, and if you or your family has never had homemade bread ... OMG .. y'all are in for a real life-changing experience and you will finally discover the "goddess" distinction you always craved as matron of your home.

I have a counter mixer with a bread hook, but I still have not used it. Soon, I will have no choice even though it is yet another "contraption" to clutter my limited counter and cabinet space.

Several weeks ago, I found this bag of "dough" in the frozen section of biscuits and rolls and decided to give it a try. The price was certainly right--Less than four bucks!!! 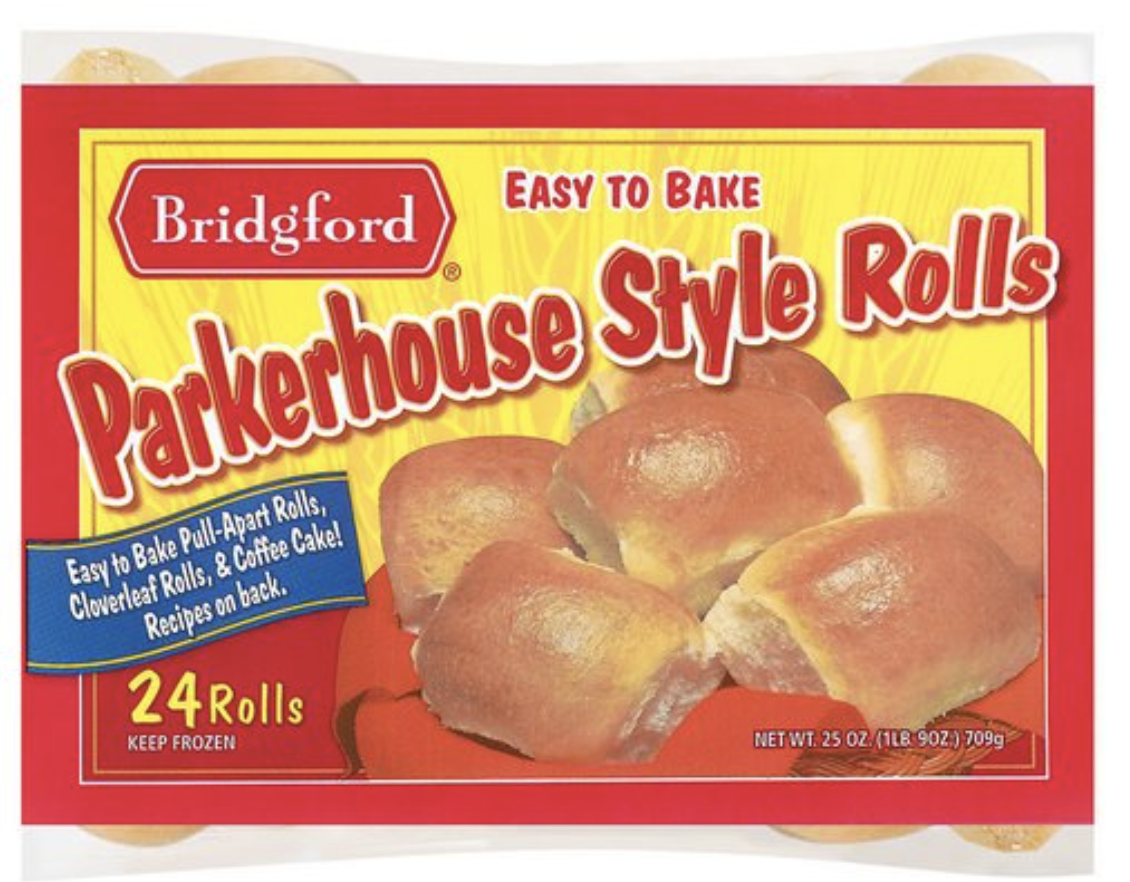 I created my own directions and  put three of the frozen rolls into a greased, small dish, sprayed them with some olive oil, and allowed them to rise. Then I baked them. Wow! They were incredible. Why? It was their distinct yeasty taste. When I was young, I made bread using "cakes" of fresh yeast which are now impossible to find. This had that incredible, old-world, iconic taste! Nice crust. Fluffy interior.

Today, I just bought my third bag for $2.99 ... But it was raised to 3.69 ... (but on sale.") Still, this is a great bargain! I can get a good two loaves from each bag and then some. It will depend on your loaf pan. I use glass, 7.5 x 3.5 inches. You can use any size pan you want. Be creative. The tighter you pack the frozen dough, the higher it will rise. This is also true of biscuits. You do not necessarily want them to "spread" as much as you want them to "rise."

Here are some tips. I bake mine at 375 convection oven in a glass loaf pan I spray with PAM for about 18 minutes. They release easily ... and I put the "loaf" back on the rack. Turn the oven off and leave it for a good five minutes or so before removing it to cool on a rack. Do not cut into it while hot. You will release the steam which is needed to finish baking.

Sometimes, I take a hunk of cold butter and rub it over the tops of the "bread" like one does biscuits or cornbread. It will melt and dissolve into the crevices--like icicles on a spring day. Remember, icicles have no fat or calories ... We should probably consume more (especially if used to stir a mixed drink)!
I don't have a photo of this, but, more and more ... just before baking, I spray the top with olive oil or brush a bit of egg/milk (best "glue") and sprinkle with sea salt. Then I sprinkle on my favorite "Bagel Topping." Definitely "over the top" but so good ... even with a smear of strawberry jelly.
I have also kneaded this when thawed ... worked in a bit of cheese, chives, green onion, olives, etc. It behaves just like a bread dough would. Very forgiving.
Let me know what you do with it. And, please, send me a photo! Enjoy ...

Posted by Kitchen Bounty at 10:49 AM 2 comments