Bean soup (like most homemade soups) is a labor of love. And time. First, there is the all-important ham bone which is one reason people don't make bean soup more often and usually only around the holidays. It's not like we all have meaty ham bones laying around the refrigerator. And then there's the soaking of the beans. And rinsing. And soaking some more. And chopping. Scraping the bone of meat, etc.

There has to be an easier way, I thought. And this recipe is it. Begin with a meaty ham shank and a can of cannellini beans. Throw is some canned chicken stock and veggies and you have great, wonderful tasting soup in two hours. Really. Trust me on this.

If you follow KB, you know how much I love ham shanks. A ham shank is NOT the same as a ham hock. A ham hock is the the pig's ankle. It's bony without much meat, but it's great for flavoring stews and soups. The shank, on the other hand, is like a mini-ham. It's kind of like the pig's "calf" (that's funny--pig and calf). Both are wonderfully smoked, but the shank yields a lot more meat. Unlike ham, the meat is more gelatinous, so it's great for stews and soups and can take long simmering or braising. And they're inexpensive.

Pork hocks are usually easier to find than shanks. When I lived in Michigan, my local grocer carried large, meaty shanks wonderfully smoked. Ironically, here in the South, they are difficult to find. Even more ironic, the only place that sells them is my local Target Super Store under the brand name "Cooks." 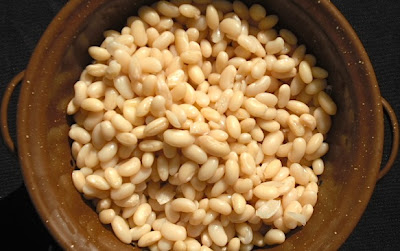 Place all ingredients but the smoked paprika into a 10-cup pot or Dutch oven with lid. Bring just to the boil. Reduce heat to low and simmer for two hours.

Remove thyme stems, clove and ham shank. When cool enough to handle, remove the meat from the shank and dice. Discard bones and fat. Return meat to soup and mix in. Add the 1/2 teaspoon smoked paprika. Stir. Taste for seasonings. Ladle into bowls and serve.

Notes: Paprika and smoked paprika are not the same, so don't substitute. If you really want to make this easy, buy carrots, celery and onions already cut and diced for you in the produce dept. of your local grocery store. Had I a fresh Roma tomato or two, I would have cut them up to add along with the veggies. But the smoked paprika gives a nice color to the soup.