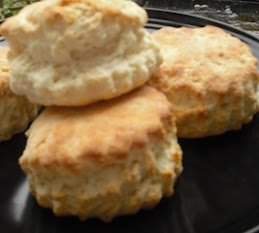 There's a reason the South is known for its flaky, tender, buttery biscuits. It's all about the flour. Yea, the white stuff. It's just one more thing that separates the North from the South. Wheat, that is. In the frigid North, hard-grained wheat grows best and produces a high-gluten flour that is perfect for bread making. But not so in the South. Here, there ain't no winter. And there ain't no 'winter wheat.' We have what is called "soft" wheat that produces a very soft, almost powder-like, low-gluten flour that is perfect for cakes .... and biscuits! 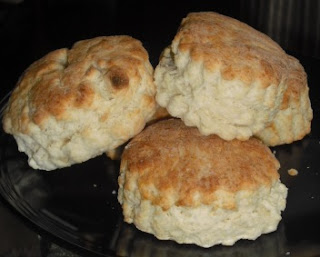 The premiere "baking" flour here is called "White Lily." (Don't you love the name? How could you not love it? It sounds like something out of a Tennessee Williams play! Whenever I say it, I pronounce it with a slight drawl.) It is made from soft winter wheat but is not without controversy. Milled in Knoxville, Tennessee since 1883, it was purchased by the Smucker's Company and milling was moved to the Midwest. Connoisseurs say they can tell a difference. 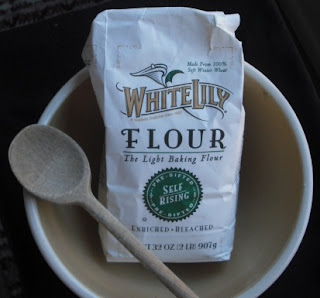 Be that as it may, it is still a very, very light flour. If you can't find it, the closest thing is cake flour, and I have a biscuit recipe for that, too. 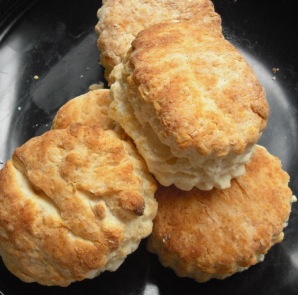 I do not use buttermilk in the biscuits only because a) it's expensive b) it sits in the fridge forever and ends up going bad and c) it's getting more and more difficult to find real buttermilk--most is "reduced fat." If I have cream or Half-and-Half, I use it.
And now a word about lard. I use it. The newer lards are much healthier then they used to be. I use Armour brand. I use it in biscuits, pie crusts, and to grease bread pans. One tablespoon of lard has 10 mg of cholesterol. By contrast, one tablespoon of butter has 30mg of cholesterol. What about fat content? Well, one tablespoon of lard has 13% fat, of which six is saturated fat. By contrast, one tablespoon of butter has 11% fat, of which seven is from saturated fat.
One tablespoon of Crisco all-vegetable shortening is 12g of total fat of which 3 is saturated fat but contains no cholesterol. If you are dead-set against lard, use Crisco.
Whatever fats you choose, they should be cold, cold, cold. Over-working the dough is the downfall, literally, of biscuits. They less you handle it, the better. Unless you are making a huge quantity of biscuits, just gently pat the dough into shape. I go for about 3/4-inch thick.
Cut the dough with a biscuit cutter which has high sides. If you use a glass, make sure it is thin, such as a wine glass, and do not twist it. You do not want to "smooth" the sides of the dough. To do so will prevent them from rising and flaking. You may also use a sharp knife and cut dough into squares.

If you choose to freeze the biscuit dough: place unbaked biscuits on a cookie sheet and freeze. When they are solid, place in a plastic bag and seal after letting air out. Bake a few minutes longer.

Heat oven to 500 degrees. Line a baking sheet with tin foil.
Blend the dry ingredients in a large bowl. Using a knife, cut nubs of butter into the flour. Do the same for the lard. Toss to coat with flour. Using a pastry blender cut in the lard and butter until lumps begin to form, some the size of small peas. Do not over mix. Do not use your hands to mix the dough since their heat will begin to melt the butter and lard. Using the lesser amount of liquid, begin adding while "cutting" it in with knife, fork or small spatula. Try to avoid "mixing." Add more liquid if necessary just until the dough leaves the sides of the bowl.
Turn dough out onto a floured surface and gently knead 2-3 times. That's it. Don't worry if some "cracks" are on surface. Pat into 3/4-inch thickness. Cut into 2-inch round biscuits.
For crisp biscuits, place one-inch apart on foiled baking sheet. For soft-sided biscuits, place closer together. Bake for 8-10 minutes checking after 8 minutes or until golden brown. Remove from oven and while hot brush with melted butter.
Makes about 10 biscuits. Recipe is easily halved. 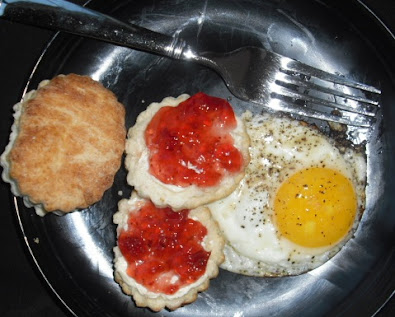 Notes: Be sure your baking powder is fresh. I use aluminum-free and store mine in the freezer. When I make peach and raspberry cobbler, I top it with these biscuits before baking.

Posted by Kitchen Bounty at 8:57 AM

I spent more than a few years in Southern Virginia and I loved the biscuits there. My mom use to use lard a lot but I'm a child of the 60s which was that overly cautious age when it came to fat and all.