I've been playing around these muffins for a couple of years now. Sometimes I add less flour. Sometimes more. Less cheese. More cheese. And then around my fourth or fifth muffin I stop myself and say, "Damn, these are pretty good."
I suppose one could add ground ham instead of bacon and they'd be just fine. Even chopped onion. They're quite versatile. I often add whatever cheese I have in the fridge or a combination. For this batch I used an extra sharp cheddar. For my next batch I'll use part pepper jack.
These are really best the next day. When they are cool, I put them in a large Ziplock back.  To serve, I nuke them until warm. A toaster oven would be great, too. Don't attempt to make 12 or they will come out more like biscuits than muffins. For the mere sake of visual appeal, I made 12 here.
Cut up bacon and fry until brown and fat has been rendered. Remove from pan to drain, saving bacon grease. Grease 12 muffin cups. Do not attempt to use paper liners. They will not peel away from the muffin. 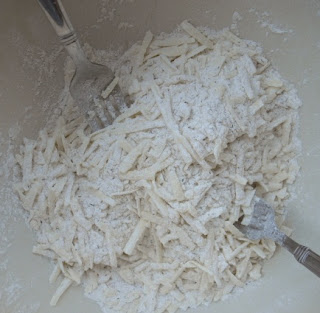 In a small bowl, mix the egg and milk. Add the bacon grease. Add to dried ingredients and mix until flour is incorporated.
Divide batter into ten muffin tins. Bake in a 400-degree oven for about 15-20 minutes or until the tops just begin to brown and you can see the cheese melting. Remove from tin to a cooling rack and sprinkle with a bit more dill if desired.

These are especially good a day later. I store them in a large Ziplock bag in the refrigerator and microwave them for about 15 seconds. These are great for "a quick breakfast." I usually fill only 10 cups so they raise higher. If your cheese is unusually sharp, use abut 3/4 of the brick.

Posted by Kitchen Bounty at 5:59 AM