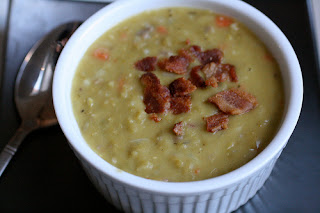 No, you don't need a ham bone to make pea soup. Not even ham hocks. The bit of rosemary in this light and savory soup adds just the right touch. I usually half this recipe but add a bit more bacon and then a bit more for garnish. If you like things a bit more spicy, use pepper bacon.

Cook bacon in a large pot until crisp. Stir in onion, leek, carrot and cook until soft. Add garlic and stir just until fragrant, about one minute. Pour in chicken stock. Stir in dried peas, bay leaves and rosemary. Simmer until peas are tender, about one hour, stirring occasionally. Now. How easy was that??? 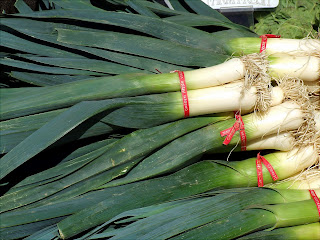 NOTE: Leeks usually come bunched in two's or three's. You only use the white part for cooking. But don't throw away the green leaves. They store for quite a while in the veggie crisper or you can rough chop them and freeze them. Yesterday I poached some chicken breasts and added the green parts of the leek to the water. You can also use them when making chicken stock.
Slice the white part of the leek down the center and check for dirt which often hides in the crevices. You may need to wash/rinse it first.

Posted by Kitchen Bounty at 7:19 AM