Rhubarb Cream-Cheese Pie (And So Much More!!!) 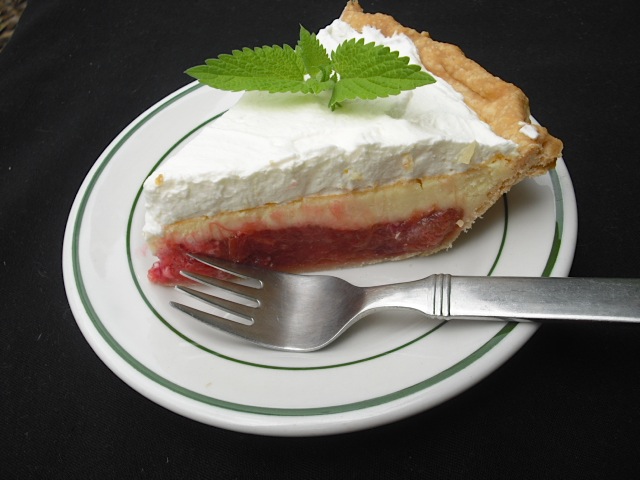 Feeling a bit tart? A bit saucy? In the mood to wear a bit of naughty--as in "red?" Then I've got a pie for you. Oh, yea!!! Pucker up, baby! Slap one on this tasty little number! YUM! And then lick your lips. Pout a little. This isn't a date. It's a rendezvous. Don't look back.... Just go for it and enjoy.

Did I really just write that? Oh, well . . . this is a "pie with possibilities." Don't stop at the rhubarb layer. Think blueberries when they are in season. Or mix things up a bit--add a bit of strawberries to that rhubarb. Raspberries would be sheer bliss!

But for now, we're sticking to the rhubarb which is in season. If you like things a bit tart, you will love this pie. It's a beautiful blend of fruit married to a light cheese layer and topped with heaven itself--whipped cream (yea, I know....rhubarb is a veggie but it just doesn't act like one. I love a rebel, don't you?). 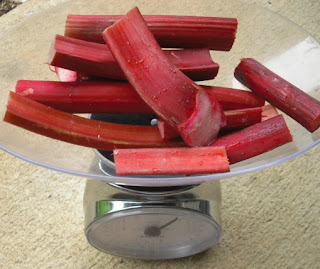 A kitchen scale is indispensable for cooking.


This is pretty straight-forward. Make your own crust or buy a pre-made one. If the latter, roll it out a bit on a floured surface to make it a tab bigger than the 9-inch pie plate.

Roll out pastry dough to fit into a 9-inch pie plate. Flute the edges. Set aside. 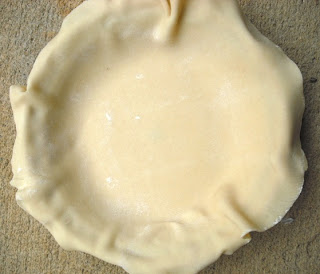 In a medium saucepan, mix together the cut-up rhubarb, sugar and cornstarch. Stir over low/medium heat. At first, nothing will happen. Just keep mixing around. Eventually, the heat will cause the rhubarb to begin "sweating" and release its juices. Just keep mixing. As more liquid is released, up the heat a bit. After about 8 minutes or so, the rhubarb chunks will suddenly break down and turn to mush. That's what you want. Stir until bubbly. It will be the consistency of a thick jam. Pour into pie crust. 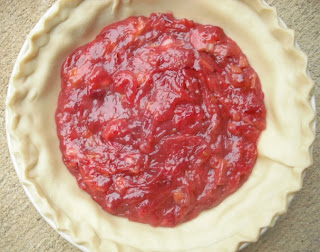 Bake in oven for ten minutes. This will form a skin on the fruit layer so the cheese layer doesn't bleed through.

In a medium bowl mix the softened cream cheese with the sugar. Add the eggs and flavoring. Beat just until smooth. Do not over beat. 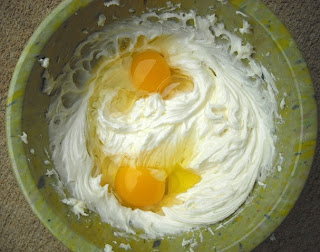 Remove pie from oven. Dial down to 350 F. Pour cheese filling over rhubarb filling. Return to oven and bake 25-35 minutes or until set. 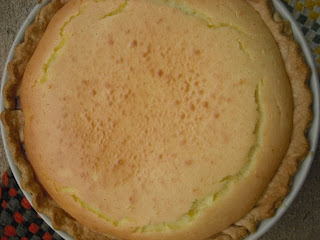 I should have taken this out of the oven about five minutes earlier,
hence the crack around the edge. Not to worry. At first,
the edges of the pie will be higher than the center.
That's okay. It will level down as the pie cools.

Remove pie from oven and allow to cool then chill in refrigerator before applying whipped cream.

Heat some water in a small saucepan. In a heat-proof custard cup, mix the gelatin with the water. Allow to dissolve. When dissolved, place in the water bath until melted. Remove. Pour whipped cream into a cold bowl. Begin beating on low, then medium, upping the speed a bit as you go. When it starts to get thick, stop. Add dissolved gelatin and begin beating again as you add the powdered sugar. Beat until path marks are left by the beaters. Do not overbeat or it will a) turn into butter or b) curdle.

Spread on cooled pie. Refrigerate until entire pie is cool and set. (I set a 10-inch glass pie plate over it.) Cut with a sharp, wet knife. 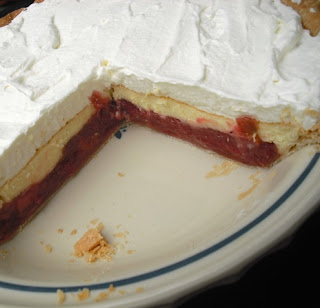 Notes: Stabilized whipped cream prevents it from getting watery as it sets and allows for piping if you are so inclined. If you change the fruit layer to berries, you will probably have to adjust the sugar and cornstarch amounts to accommodate the extra juice, so be careful.

Posted by Kitchen Bounty at 5:01 AM

When I eat this pie I will think I have died and gone to Heaven...never mind the Rapture.:)

I won't have to share this with anyone if, I mean, when I make it will I? I see me, the pie and a fork somewhere quiet, maybe with candles....