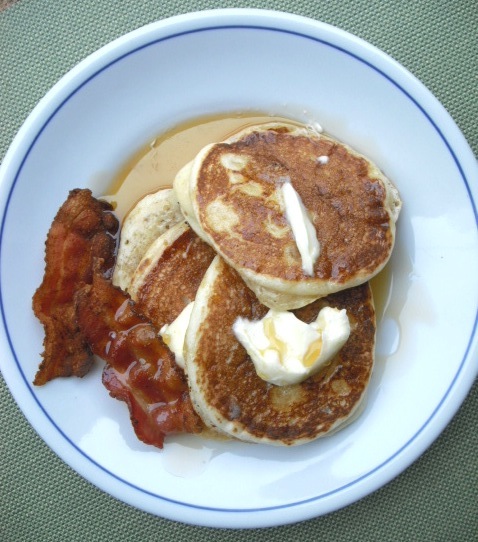 Y'all need to slap your traps with these here flaps! Be sure to warm the maple syrup,
first. Real maple syrup. Not the fake stuff.

I hate buying buttermilk for a recipe because it's expensive and then you're left with most of it after needing only a cup or so for the recipe. But it's what I had to do. So I bought it--then I never got around to making the recipe! So now I have buttermilk. And I've been making and freezing pancakes. Flapjacks. Flaps.

The most difficult part of pancakes for the novice is the temperature of the pan. If you're new at this, an electric skillet works well since it keeps a constant temperature. You might also want a non-stick skillet. It's important to lightly skim the pan with oil; you don't want to "fry" your pancakes. And you don't want the pan so hot that it scorches the first side. Always test things out with just one pancake.

I use my trusty, well-seasoned cast-iron skillet. I put in a tablespoon or so of oil and then use a paper towel to kind of "drain" and skim the pan as I go around it leaving a thin film. A griddle has the advantage of no sides, so it makes it easier to "flip" the pancake. If you're not good at flipping, fill the pan with less, not more, pancakes, and make smaller ones, not larger.


The acid in buttermilk combined with baking powder produces a chemical reaction that causes the pancake to rise. Hence, buttermilk pancakes are fluffier than if made with regular milk. As soon as the batter hits the hot pan, you will actually see the "lift."

Why do I like this particular recipe? I like whisking the egg white and then adding some milk to it and I like adding the yolk to the melted butter. It just makes sense. Pancakes freeze beautifully and make for a quick breakfast or snack.

Use whatever flavoring you'd like to the batter. I like just a touch of vanilla without it overpowering the batter. You may also add a bit of cinnamon and/or nutmeg, apple pie spice. Pumpkin pie spice is especially nice. If using syrup on your pancakes, you don't really need the sugar. If serving with fruit and powdered sugar, then I would certainly add the sugar.

Begin to pre-heat your electric fry pan or griddle if using. If using a cast-iron skillet, begin to heat on low.

In a medium bowl, mix your dry ingredients.

Nuke the butter just until melted. Add the egg yolk and mix.

In a small bowl or cup, whisk the egg white just until frothy and broken up. Whisk in the 1/4 cup of milk.


Now add the wet ingredients to the dry, whisking just until well-combined. There will be lumps. You want lumps. Allow mixture to sit for several minutes.

Pour about 1 tablespoon of oil onto hot pan, 375 degrees if electric, medium heat if using a range. Using a wadded-up paper towel, give the pan a quick skim leaving behind a film. Skim the pan with oil after each batch.

Using a small ladle or 1/4-cup measuring cup with a handle, pour in batter for just one pancake to test the pan. Bubbles should appear on the surface in about one minute. It should be ready to flip after about 2 minutes. Continue to cook for another 2 minutes or so, adjusting heat if necessary, to avoiding scorching.

Finished pancakes can be kept warm in 200 degree oven as you make more.

To freeze pancakes: allow pancakes to cool. Place no more than two on top of each other and freeze otherwise they will all stick together. When frozen, place in a plastic bag. I use bread-loaf bags that I save. To serve: remove pancakes and place on outer edge of micro-safe dish. Cover with a paper towel and nuke for about 30+ seconds until warm and steamy. Place in the toaster just to crisp the outside.

Posted by Kitchen Bounty at 4:52 AM