What we call "pot pies" here in America were called savory pies in Ireland, England and Scotland. The chicken-leek pie is classic British fare. And leeks do make the dish. I also added mushrooms and, since I now live in the South, I added smoked hog jowl--bacon to you Northerners.

I became so frustrated with this recipe that I almost gave up and threw it out. The sauce was too thin and not at all what I wanted and I felt the chicken overcooked. Instead, I covered the meat/leek mixture and put it in the fridge. I doctored up the sauce (cream cheese does wonders) and put it over some whole-grain pasta. The following day I re-examined my recipe and amended it. I'm glad I did.

Don't even begin to think of this a Banquet frozen pot pie. The savory leek-and-thyme chicken mixture with a cheese-garlic Bechamel sauce and topped with a flaky crust is insanely, lick-the-dish-clean delicious and worthy of a white-linen table cloth.

Place bacon in heavy saucepan and begin to sautee. When it begins to brown and render its fat, add the mushrooms. If necessary, add a drizzle of olive oil. You don't necessarily want the bacon to turn "crisp." This is easier to do if the bacon is a thick slice or if your are using smoked hog jowl. When mushrooms have yielded their liquid and reduced, remove to a bowl.


Add a bit of olive oil and butter to pan. When hot, add the leeks and onions, cooking over medium heat until leeks are wilted and the volume is reduced by half. The mixture will just begin to turn a bit brown and leeks will have become soft and pliable. Remove to bowl with mushroom/bacon mixture. 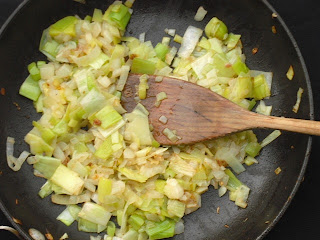 Give the pan a drizzle of olive oil and a bit of butter. Add chicken and quick fry until golden. Don't crowd the pan and do in two batches (which is what I did). If necessary, de-glaze pan with a bit of dry white wine. Remove chicken pieces to separate bowl.

When done, add all ingredients back to pan. Add dried thyme and salt and pepper to taste. Simmer gently so flavors meld. 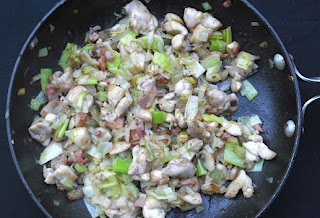 At this point, the mixture may be cooled, covered and refrigerated until the next day.

To make the sauce:

Add butter to a medium pan. When melted, add the garlic and stir until fragrant. You don't want it to brown and if it begins to do so, remove from heat immediately.

Add the flour and stir for about two minutes over medium-low heat to cook out the flour taste. If it turns a bit golden, don't be alarmed.

Now begin adding the milk, a little at a time, stirring constantly with a wire whisk. When tiny bubbles show around the side of the pan, that's a sign to add more liquid. (This is not going to be a super thick sauce.) Add stock a little at a time. When it turns the consistency of heavy cream, add the cheese and stir until melted. Add a few sprinkles of turmeric until it turns light gold in color. Taste for seasonings.

Place meat mixture in a large bowl and begin mixing in the sauce. You may find you don't need all of it. You will end up with a total of about 2.5 cups of mixture. 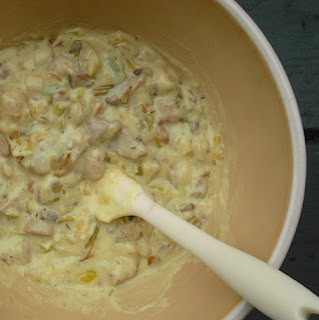 Divide cold puff pastry into four squares. Wet the rim of ramekins and place one square over each pot, pressing down gently around the edge. Cut a vent in the center. (At this point, I only did two and returned the other two to the fridge to prepare the following day.) Place filled and topped pies in refrigerator while oven is heating.

Preheat oven to 400 F. Place on a baking sheet and bake for about 20 minutes. 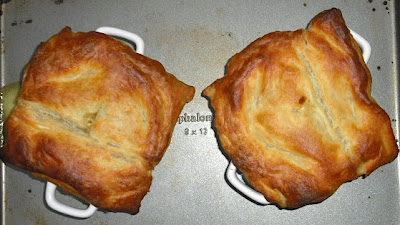 Allow to cool a bit before digging in. 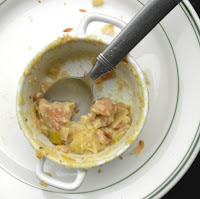 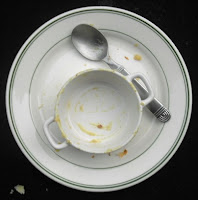 Posted by Kitchen Bounty at 6:23 AM