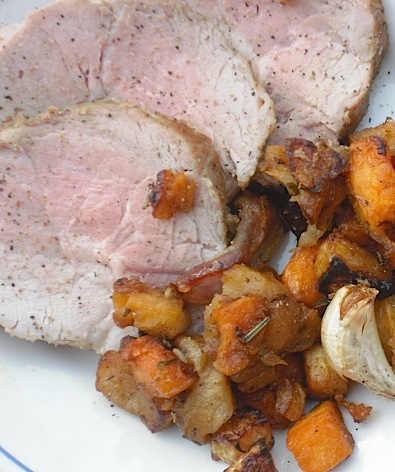 My grocer stocks wonderful pork roasts that weigh less than 2 pounds. They are meant for crock pots and slow cookers. But I roast them.

Don't be put off by the Mediterranean seasonings of lemon and fennel. Nothing complements a pork roast as these two flavors. Neither is overpowering; together, they are a hit.

These small pork roasts are "netted" to keep the meat together in a cylindrical shape and usually have just enough fat to keep them moist.

Feel free to use other roots, such as parsnips or carrots.


Sprinkle the roast with the dried ingredients. I usually do this over the pan I am going to roast it in. I roll the roast in the seasonings that fall to the bottom of the pan to pick up as much as possible. Grate the lemon on top of the pork roast. Pat in. Give a light drizzle of olive oil to the roast and rub in all over. Sprinkle top with Kosher salt. The salt will give a nice crust to the roast.

Remove rutabaga, apples, sweet potato and, if using, garlic cloves to a small bowl. Drizzle with olive oil to coat. Sprinkle with a bit of dried, crushed thyme leaves, a bit of Kosher salt and pepper.

I like to roast meat on a rack so heat surrounds the entire cut of mean. If you don't have a small rack, you can easily make one using tin foil and coiling it like this: 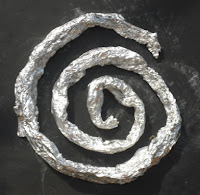 Center pork in a roasting pan. Surround it in a single layer with the root vegetables keeping the apples closer to the pork and the rutabagas to the outside of the pan. Strip the leaves off of a rosemary stem. Mince them. Sprinkle over the rutabaga and apple mixture.

If using bacon, place strips over the pork roast.

Roast for 10-15 minutes at 420 degrees. Lower temp to 150 and roast for about 20 minutes. Remove from oven and, if desired, stir in about one tablespoon butter and stir around the apples and roots. Return to oven until instant-read thermometer in the thickest part of the roast registers about 145 F degrees. Remove. Tent with foil and allow to rest at least 15-20 minutes. Remove pork roast and cut off netting. Thinly slice. Serve with apples and roots and a drizzle of the sauce.

*Because the apple is not as dense as the roots it will cook faster. As such, cut into thick slices rather than chunks

Posted by Kitchen Bounty at 5:51 AM

I want to try this with the sirloin pork roast I buy at Costco. Should be perfect.