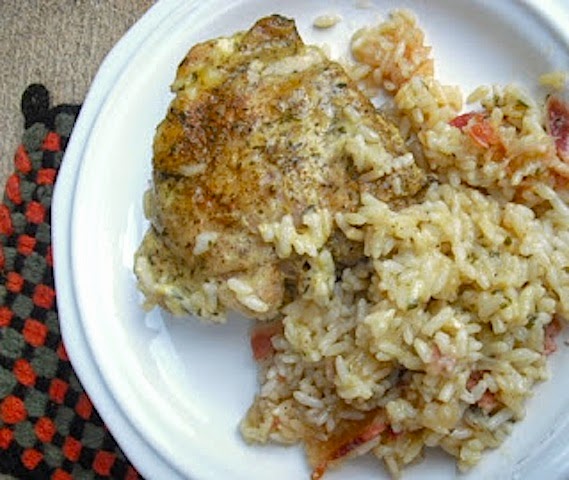 (Update: Since I posted this recipe, I've seen several on the Internet. It belongs to a family of old-time recipes called "Funeral Chicken." All add some kind of canned, cream soup, rice, and bacon. Why "funeral?" Well, it takes a long time to bake, time one can spend with the bereaved family, etc. The older recipes always use bone-in, skin-on chicken, hence the long bake time. The newer recipes use skinless, boneless chicken breast which I DO NOT recommend at all (unless you want it to be your own funeral ....)

This recipe is really all about the rice. It's incredible. After two hours of a slow bake, it's infused with the most amazing, delicious, tantalizing, smoky, bacon-chicken taste I've ever had. And it's a cinch to prepare! I have tried short cuts. They don't work.

This is very-much adapted from the cookbook, Sweet Potato Queen's Big-Ass Cookbook (and Financial Planner). It's a fun read and recipes aren't "listed" but kind of imbedded in the prose. Thank-you for the inspiration ...

It's important to cover this dish securely so the steam cooks the rice and chicken. Do not peek! Do not change that oven dial! Once that oven door closes, leave it that way until the buzzer goes off.

I secure the dish with two pieces of regular foil and then place a glass lid on top. (You can use one sheet of heavy-duty foil.) Use an 11 x 7 Pyrex baking dish. Mine has a glass lid which I love. Crimp the foil as tightly as possible around the rim of the dish. Yes, I have OCD ....

Do not use boneless, skinless chicken. As a society, we are obsessed with cuts of meat that bear no resemblance to it's origin. I find it both odd and peculiar. And, as a cook, it makes me angry. Bone, skin and sinew add flavor and moisture. Do you have teeth? 'Nough said ....

I used no salt in this recipe since the bacon and soup have plenty. It's important to season the chicken liberally. I used a combo of Bell's Poultry Spice, pepper, garlic powder, and a bit of whole, dried thyme. I coat the front and back of the chicken. I also like Cavender's All Purpose Greek Seasoning. The original recipe called for just Italian seasonings. Blah ... That is where it went wrong.


Preheat oven to 300 F degrees.  Layer the bacon on the bottom of the dish. Evenly distribute the raw rice over it and sprinkle with the dried onion (how easy is that?) 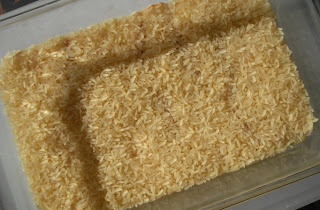 Place 1/4 piece of the extra bacon piece under the skin of each thigh. This gives it just a bit more taste and keeps it from drying out. Evenly coat the chicken pieces with the spices you are using, including the dried thyme and several grinds of pepper, front and back. Place on top of the rice. Give just a dash of Cayenne pepper on top. 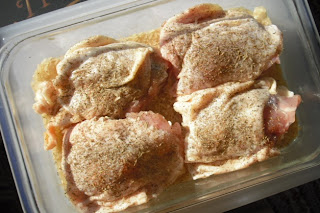 In a small bowl or pitcher, measure one cup water and add the cream of chicken soup. Add the parsley, nutmeg, garlic powder. Whisk until well blended. Pour into the casserole, right over the chicken. (If you used garlic powder on the chicken, omit it in this step.) 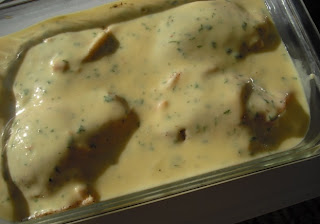 Now cover tightly, tightly with heavy-duty foil or two layers of regular foil. Place in a 300 F oven for two hours. Do not peek. Remove from oven and allow to sit for 20-30 minutes covered. Do not open!!! You want the steam to finish cooking the rice.

The rice will have expanded from absorbing the liquids and juices from the chicken. It will be infused with an incredible smoky flavor from the bacon. 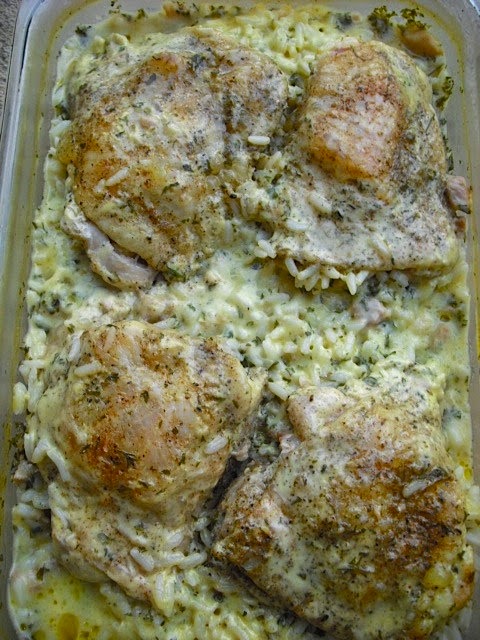 *Chicken thighs are meaty and gelatinous, so they add a lot to this dish and I can't imagine it without them. One time, I may just add two thighs and one large chicken breast with the skin and bones.

**Don't use "thick" bacon. The last time I made this the bacon was ridiculously paper-thin (have you seen the price of bacon, lately?), so I used a bit extra.

Notes: The original recipe called for just seasoning the chicken with salt, pepper, paprika and then using one teaspoon of dried oregano mixed with the soup mix and spices listed. The paprika really didn't add anything to the dish. I opted to liberally season the chicken instead and to insert a small piece of bacon under the skin. The soup mixture picked up the flavors just fine. After preparing this several times, I think liberally seasoning the chicken is important otherwise the chicken itself is a bit bland. And it's really important to SEAL this puppy TIGHT to keep in the steam to cook the chicken otherwise you will end up with raw rice.

This comes out to about one piece of bacon per thigh. That's not a lot of bacon.

Posted by Kitchen Bounty at 6:34 AM