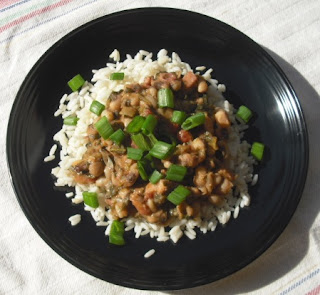 Black eyed peas are a Southern tradition. The custom is to serve them with collard greens and some type of pork on New Year's Day for good luck and prosperity. No two recipes are the same. Some use kale. I used spinach simply because I had it on hand. Some use sausages, but most rely on ham hocks or shanks and most is served over white rice although some add the rice directly to the dish as it cooks. If you like bean soup, you will like black-eyed peas.
Hoppin John
Rinse and pat dry the ham shanks. Heat oil in a large Dutch oven and brown the ham shanks on all sides. When done, remove to plate.
Add a bit more oil to the pot and add the chopped onion, celery, green pepper, jalapeno and cook until soft, scraping up the brown bits left over from the ham in the pan. Salt and pepper to taste. 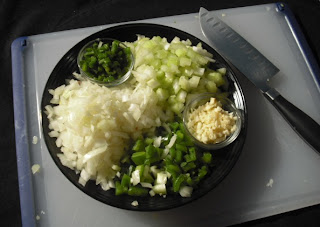 Add the cumin, the chopped garlic and the red pepper flakes and stir just until fragrant. Add the black-eye peas then the tomatoes, juice and all. Add the chicken stock, the ham shanks and any liquid that has collected on the plate. Bring to a slow boil, lower heat and simmer, partially covered, for about 1 1/2 hours until beans are soft and tender.
Remove shanks from pot and allow to cool. Add the smoked paprika. Taste. If you'd like it hotter, add a few shakes of Tabasco. Re-season with salt, pepper, cumin if needed. 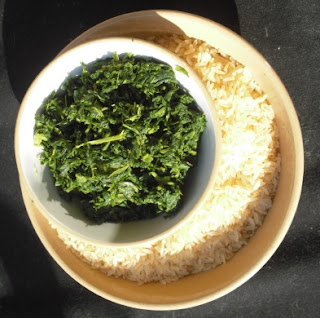 Pour 3 cups water into a pan and add 1 teaspoon salt and 1 teaspoon dried onion. Add the 1 1/2 cups raw rice. Stir. Bring to a boil then lower to simmer and cover until done. Set aside.
Remove the meat from the bones and cut up.
Add meat back to the beans in the pot. Now add the chopped spinach and stir. The mixture will be like a thick soup. To serve: place rice on plate, spoon over the Hoppin John and sprinkle with the green onion. If desired, you can also sprinkle with crumbled bacon.
Notes: Cumin has a distinct flavor. If you are not used to it, add less rather than more. You can always re-season it. Hoppin John is great served with any type of smoked sausage.

Posted by Kitchen Bounty at 3:04 PM

Thanks for being sensible. A recipe is a guide, not a law and you show that.