North Carolina doesn't allow grills in apartment complexes, so I'm limited to my oven. One recipe I tried would have been dynamite--if the wings were grilled. But in the oven, it just didn't work.

I love chicken wings. They are tender and juicy with little fat. The Fines Herbes used here add just the right blend of taste. When baking, as opposed to grilling, I found less garlic was better than more because in the oven wings don't bake for a long period of time and there is no "flame" to sear and mellow the garlic.

Many recipes called for baking wings at a high temperature of 400-425. I thought it dried them out too fast. And  I realized I really wasn't after a "crisp" wing as much as I wanted one that was flavorful and still juicy and "buttery." The rough-grated Parmesan at the end of baking does give a note of "crispness" if you want. But, again, it was the subtle taste I wanted.

A six pack of wings on sale can be had for about 2.50, and that's how I purchased all my wing "experiments." A real bargain.


Wash, drain and wipe dry the chicken wings. Cut off the tips (and freeze for making chicken stock). 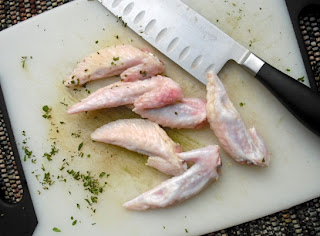 In a small bowl microwave the butter just until melted. Add the Fines Herbes and garlic. Stir. Add the olive oil and 1/2 teaspoon Kosher salt and Tabasco.

Place wings in a large, sealable plastic bag. Add the butter-herb mixture. Squeeze out air and massage the the wings until they are evenly coated. 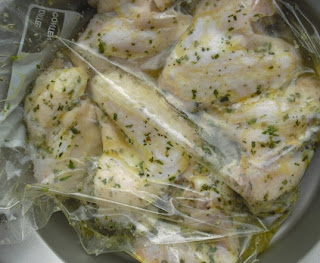 Marinate for at least two hours, refrigerated. About 30 minutes before baking, remove wings from fridge and run entire, sealed bag under hot water to de-congeal. Give another good "massage" and allow to sit for about 15 minutes or so.

Preheat oven to 375 F degrees. Line a baking sheet with foil that has been sprayed with non-stick oil. Evenly space wings squeezing out as much "sauce" as possible to evenly coat the wings. Sprinkle with freshly-grated pepper. 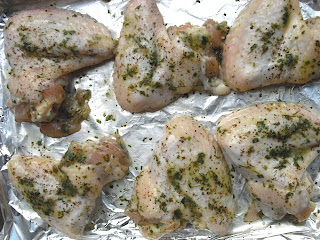 Bake for 20 minutes. Remove from oven and raise temperature to 400 F degrees. Sprinkle grated Parmesan over wings and return to oven. Bake an additional 15 minutes until cheese begins to melt and turns golden. 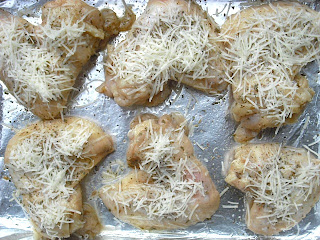 Remove wings from oven and allow to stand at least 15-20 minutes.

*  Fines Herbes  is a blend of chervil, parsley, chives and tarragon in equal amounts. I usually just make own using dried herbs. I make a large quantity and keep in a Ziploc bag. If you don't have them, just use one good teaspoon each of the above dried dried herbs to make this recipe.

Notes: For the cheese, I used Grano Padano which isn't as salty as Parmesan. Don't use a crappy cheese. Serve these with simple buttered white rice, green vegetable and chilled dry, white wine.

Posted by Kitchen Bounty at 6:33 AM