As delicious to eat as it is beautiful to look at, this colorful soup is studded with bright, yellow hominy (corn) to contrast with the orange tomatoes and pink chunks of ham. And it’s pretty easy and inexpensive to prepare, too. You basically chop one onion and some garlic and open and dump cans and throw in some spices. But don't be fooled by the simplicity of it all. The depth of tastes will win you over. I've even had people pay me money to make them a potful.
This recipe really began as a "stew." But people often commented on the deep, rich "broth" and wanted more! So I transformed it into a savory soup. It's one of my favorites.


Heat oil in Dutch oven over medium-high heat. Add onion, cumin, thyme, bay leaf and red-pepper flakes. Sauté 5 minutes. Add ham shanks, broth, tomatoes and garlic. The tomato slices will break down as they cook. Bring to a simmer. Cover and cook until shanks are tender, at least 1 1/2 hours, but longer is even better. I often go for an entire afternoon.

Carefully remove ham shanks and place on a cutting board. Remove meat and cut into bite-sized pieces. Discard fat and bones. Return meat to pot. Add drained-and-rinsed hominy and simmer until hominy is just tender, about 15-30 minutes. Add the smoked paprika, if using. Ladle into deep bowls and serve. (Can be prepared 1 day ahead. Cover and refrigerate. Reheat until heated through.)
For garnish, dollop with sour cream and sprinkle with grated cheddar cheese.
NOTES: Because ham can be salty, use broth, hominy, and tomatoes that are low in sodium compared to other brands. I crush the cumin seeds in a mortar and pestle. A ham "hock" is the foot of the pig and has little meat. The "shank" is above the foot and has lots of lean meat. Like ham, they are usually smoked. 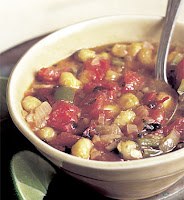 Posted by Kitchen Bounty at 6:31 AM

Followed this link from your current post. Looks fabulous. Thinking this would be good with the bone left from spiral sliced ham that still has a lot of meat on it.

Paula: When I lived in the Midwest, ham shanks were easy to find. Here in the South, for some reason, they are more difficult. But then we have places where you can buy frozen, meaty ham bones! Go figure. The nice thing about shanks is their smoky, gelatinous taste and texture. I use them a lot in cooking.