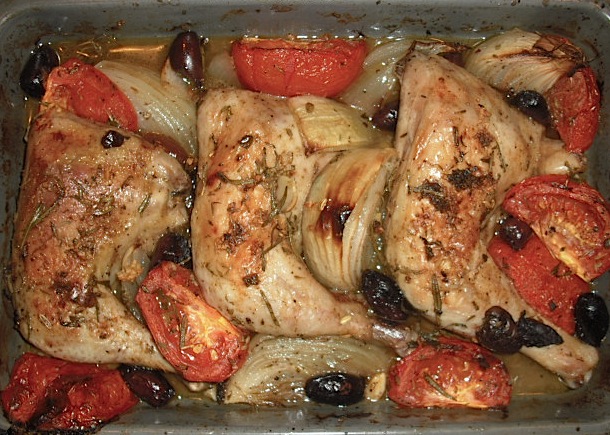 Here's an amazingly simple recipe with a rustic, bistro-like flare and presentation. I've used fennel for pork, but never chicken. I was wildly surprised at the flavor. I used three very small chicken leg quarters I had on hand even though the recipe from Epicurious called for one whole chicken. Cornish Hens cut in half would be wonderful, though.

It also called for Herbs de Provence which I don't keep on hand. Instead, I used a bit of Fines Herbes, dried thyme and freshly-snipped rosemary. I seasoned the chicken with Lawry's Seasoned Salt and Cavender's All Purpose Greek Seasoning. That's it. I used "vine-ripened" grocery store tomatoes.

In an 11 x 7 casserole dish or pan, place the tomatoes, onions, olives, sliced garlic, fennel seed, dried thyme flakes. Sprinkle on a bit of Herbs de Provence or Fines Herbs. Drizzle with the tablespoon of olive oil, a few pinches of Kosher salt and several grinds of fresh pepper and mix gently to coat. Push to sides of pan.

Season chicken with seasonings of your choice, front and back, and arrange in pan, skin side up, re-arranging vegetables to the sides and then between chicken. Rub chicken with pressed garlic. Scatter rosemary on top and give another drizzle of olive oil.

Bake for 45 minutes until chicken is nicely browned and crisp.

Notes: Next time I'll tuck in the black olives a bit more since they can dry out during cooking. I could also see adding some fresh, thick-sliced mushrooms. This makes a great sauce as it cooks which would be great spooned over roasted new potatoes. Just because I had it, I used the leaves from one fresh oregano stem.

Posted by Kitchen Bounty at 5:30 AM

nice piece of information, I had come to know about your internet site from my friend vinay, delhi,i have read atleast 12 posts of yours by now, and let me tell you, your website gives the best and the most interesting information. This is just the kind of information that i had been looking for, i'm already your rss reader now and i would regularly watch out for the new post, once again hats off to you! Thanx a ton once again, Regards, cornish hen recipe