It was chilly this morning with a thin layer of ice on the birdbath. I wanted eggs for breakfast, but not fried, scrambled or boiled. Omelet? Nay.

This is a recipe you can make up as you go depending on ingredients you have on hand. I had some mushrooms, smoked hog jowl and onion. I also had cheese. On one I used a combo of Parmesan and fresh rosemary. On the other, I used Pepper Jack. I preferred the pepper jack.

You may, of course omit the onions, mushrooms and bacon. It's up to you. Even though I sauteed the mushrooms, they made the egg whites a bit more watery than I would have liked, but it was perfect for dunking crusty bread.


Fry bacon or smoked hog jowl until brown and not overly crisp. Remove from pan and allow to drain.

Remove some of the fat from the pan add the chopped onions and mushrooms and saute until onions are soft and mushrooms have released their liquid. Remove from pan and allow to drain.

Butter a ramekin and pour one tablespoon heavy cream in the bottom. Add some of the mushroom/onion mixture. Add some crumbled or torn cooked bacon.

Fill a shallow pan with boiling water. Place ramekin in the pan to begin warming the cream and vegetable mixture.

Carefully, break two eggs per ramekin. (I break each egg separately on a saucer then slide it into the ramekin ensuring an unbroken yolk.) Put a bit more cream over the eggs and then cover with cheese. 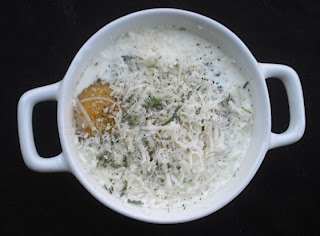 Place pan into a pre-heated 375-400 F degree oven. Bake for ten minutes until set. The whites will have set up and it should still be "jiggly." Remove from oven. I left mine in the hot water bath for a few minutes before removing. The yolk was just the way I liked it: creamy and custardy but not runny. 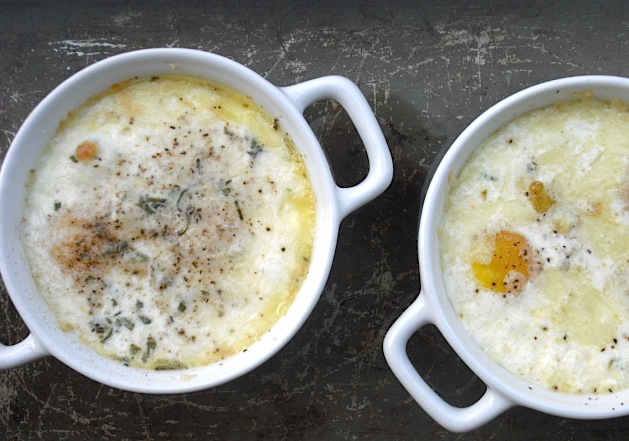 Serve with hunks of a crusty, artisan bread. 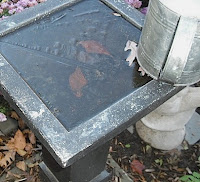 (Notes: I probably would not have made this if I didn't have my Breville countertop oven. Since I purchased it, I haven't turned on my standard oven once!)

Posted by Kitchen Bounty at 9:17 AM

Sounds so simple. Why have I not tried this before?

Paula: There are a lot of recipes out there for this dish. I've always wanted to make this but didn't want to turn on my big old oven. When I got my countertop Breville oven, it was perfect. I do love that oven. (Next time I won't use the mushrooms tho, it made the dish too watery.)

I have to make this in my Breville! Thanks for the recipe, and the tip about the mushrooms!

I recently bought another Breville. After ten years of constant use, it started to slow down on me. One day I was in Home Goods and, believe it or not, they had a discounted new Breville oven for only 150.00. I grabbed it without thinking twice! The newer ones have a light inside which I like very much!