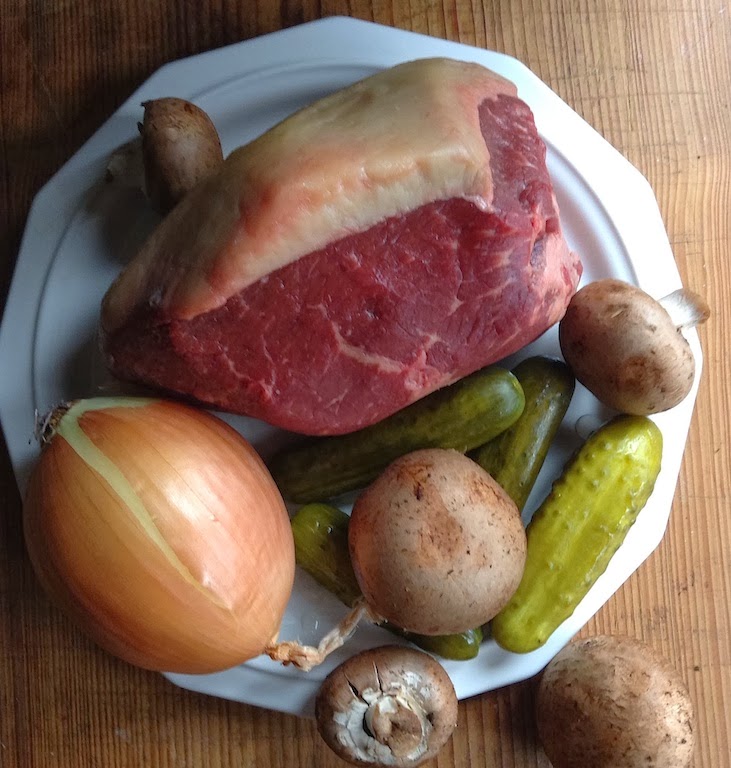 I've been desiring to make this recipe since 1985! That's when I bought my copy of "The Frugal Gourmet," by Jeff Smith whose PBS cooking series took the nation by storm. It was Smith who introduced the country to the delights of the international community and their culinary contributions.

Smith's later and final years were besmirched with scandal, lawsuits, and out-of-court settlements. Be-that-as-it-may, he has left us with a rich legacy of recipes and cookbooks that have, indeed, changed the way we cook and the ingredients we use.

This recipe is an example. It is typical Eastern European, specifically, Poland. (I have updated this recipe, so do not miss observations at the end of the blog.)

The original recipe calls for several dried mushrooms resuscitated in hot water, the water strained and added to the pot along with the chopped mushrooms. I used fresh. Also, use a "briny" dill pickle. The briner the better. This a great recipe to use up that lonely, half-filled jar of pickles you have wasting away in your fridge. It also calls for one bay leaf. I'm not a believer in dried bay leaves or what they "add" to any recipe other than a, perhaps, artistic flourish.

When I make this again, I will use a few pepperocini peppers for a bit of "heat" or maybe one diced Fresno pepper for its red color and mild heat or, one long-Italian pepper, chopped.

After about one hour of a slow simmer, I could not stop myself from dipping lightly-buttered ripped chunks of crusty Italian bread into the broth. That was a meal in itself.

Pay attention to cooking time. You want the roast tender but still firm enough to slice. You can, of course, go over the recommended cooking time so that the roast "shreds." In that case, serve on crusty rolls with a bit of Provolone cheese on top.

This is a very forgiving recipe, as most "peasant foods" are. (It was Smith who introduced us to that term.) Carrots? Add some. A bit of celery? Why not? Taters? Of course.

Place Dutch oven, large enough to accommodate roast and other ingredients, over medium heat until hot. Add oil. Salt and pepper your roast. Brown roast on all sides.

Add beef stock. It should cover roast by half. Add more if necessary, or add water with
the beef stock. Bring to a slow simmer and simmer for about two hours or until just fork tender. Remove to a plate, covered with tin foil

Stir in sour cream to pot and continue to simmer for an additional 30 minutes. Taste for seasonings and add what is necessary.

Slice roast. Serve over fluffy egg noodles or mashed potatoes with plenty of rich sauce.
NOTES: The original recipe calls for 3-4 dried mushrooms rehydrated in boiling water (just cover with  a bit more than needed). Squeeze, but save the water. Save the water (but not the sediment) and add to roast. Also, use 3-4 bay leaves, not just one. Bay leaves are an integral part of Polish cooking. If using fresh use less. Fresh, of course is best.)

*Sorry, no pics of finished recipe. It was late and we had a sleet storm .. so it was very dark, indeed, to take decent pics.

Bought this book in 1985 as an outlet for a hobby while in Grad School.
I have made this dozens of times since. This is one of his best recipes out of the three of his books that I have. I used chuck roast ( was poor then) but have done this with tri-tip and brisket with adjusted cooking times.
I use both fresh mushrooms along w/ reconstituted dried wild mushrooms along with the strained liquid. Potatoes are quartered, boiled for 20 minutes and added with the sour cream for an additional 20- 30 min. of cooking time.

Double the garlic, add sauteed hungarian peppers, hot or mild, and add rosemary to the front end of the recipe. Crispy crumbled bacon over the top at the end is consistent with this ethnicity. Complete with any soft cheese on rye bread!

Great tips! Thanks for sharing.