This recipe from Marcella Hazan was all over the Internet when it first appeared several years ago. Most people "swooned" over its ungarnished simplicity and taste. But, there are those who prepared it and voted it anything but"special."

Me? I'm somewhere in the middle. I have a tough time with any tomato-based sauce since my taste buds recoil at acidity and sourness.

So, in the interest of Internet mad-recipes, I made this.

I enjoyed it so much, I made it several times.

This is NOT a spaghetti sauce.

It's not going to have a ton of flavors like most pasta sauces, but that's the point. So, move on.

I thought maybe I'd miss garlic, but I didn't.

My favorite way to eat this was simply dipping in pieces of torn bread to hold the unctuous sauce.

And, when I paired with meatballs, it was really all I needed. It complemented the savory meatballs perfectly without stealing the show the way some sauces can.

I've always added butter to my tomato sauce. It just makes it more mellow, and I'm not ready to throw out my standard tomato sauce recipe for the acidic impaired. Or my jar of Prego.

So, will I make it again? Yes, especially in the summer when I have fresh basil at hand.


Place tomatoes in a heavy pan. Add the butter and onions. Bring to a simmer, occasionally breaking up the tomatoes, and cook for about 45 minutes to an hour or until you notice the yellow sheen from the tomatoes releasing their fat. (I kept the pot partially covered). Remove and discard onion. 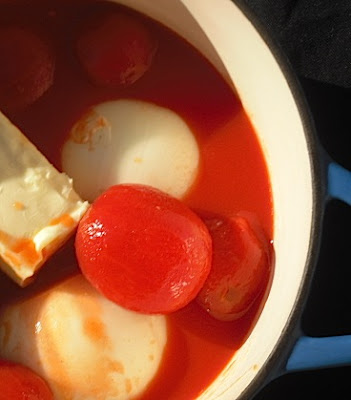 (Notes: It's important to use a heavy-bottomed pan. You want a good, constant simmer so the the tomatoes thicken up. Use real butter. The recipe suggests San Marzano tomatoes, but, to tell the truth, I sometimes find them "watery.")

Posted by Kitchen Bounty at 5:58 AM

I had the best pasta I've ever eaten in Italy and I'm sure there was nothing in it but tomatoes.... I do believe I shall have to try this.... Butter, eh? Hmmmm....

Just 3 ingredients? Hopefully the onion gets soft and
Indistinguishable. Would this be good on pizza?

Paula: Whoops.... remove and discard the onion. I've since add that... thanks.