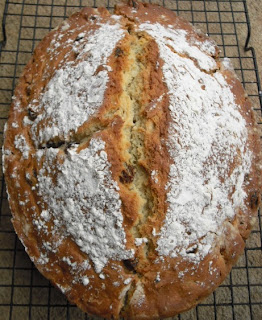 A true Irish soda bread uses whole-grained flours, not white, and little, if any, sugar (it's actually quite bland). What we call Irish soda bread here in the United States is more closely aligned to what is actually a pudding called “Spotted Dick” or "Spotted Dog" in the United Kingdom. What both have in common is no yeast. Instead, the leavening agent is the chemical reaction between the baking soda and the buttermilk which causes the loaf to rise nice and high. Be sure your baking soda is fresh.

In Britain, the addition of eggs and some sort of fat would constitute a "cake" rather than a "bread." Hence, this is sometimes called a "railway cake" sturdy enough to take the travails of travel.

This loaf is particularly good lightly toasted and spread with cream cheese. It’s really quite easy to make. British counterparts would call for dried currants. I settled for American dried cranberries. I steeped both the berries and raisins in a cup of boiling water to plump them up. I drained them in a sieve and then rolled them on a cloth towel to dry as much as possible. Don't omit the caraway. (If you can find them, use baking raisins which are already plump and juicy).

Before making the bread, preheat oven to 350 degrees F. Grease a 9-inch round cast iron skillet or a 9-inch high-sided round baking or cake pan. I  use an 8 x 11 cast-iron, enamel-lined Dutch oven.

In a large mixing bowl, combine flour (reserving 1 tablespoon), sugar, baking powder, baking soda, salt, raisins and caraway seeds. In a small bowl, blend eggs, buttermilk and sour cream. Stir the liquid mixture into the flour mixture just until the flour is moistened. Knead dough in bowl about 10 to 12 strokes. Dough will be very wet and sticky. Place the dough in the prepared skillet or pan and pat down with moist hands. Cut a 4-inch long x 3/4-inch deep slit or incision in the top of the bread. Dust with reserved flour.

Bake in the preheated oven for 60-75 minutes or until it reaches an internal temperature of 200 F. This is a wet dough, hence the long baking time. Let cool a bit and turn bread onto a wire rack to cool.

Posted by Kitchen Bounty at 4:10 PM

I am going to have to try this today - it looks wonderful! Perfect day for it - rainy, gloomy, and too cool for March in NC!

Lots of news from our front...we should try to get together before we move again. I start my new teaching gig in August! Would LOVE to see you.

Mine is always crumbly. Any suggestions?

Avoid over mixing or kneading.