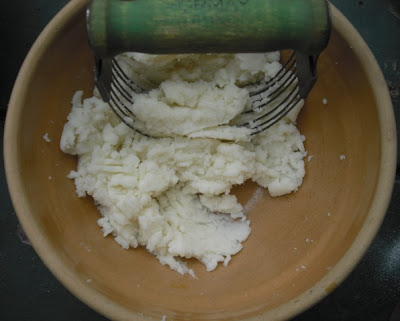 Potato cakes are entries common in older cookbooks. I've had my eye on one from the 1930s for some time now and adapted it for this recipe. Hint: Do not wait until you have "leftover" mashed potatoes or, like me, you'll never make them. Mash some potatoes just for this recipe. Really, how difficult is that? And, to be truthful, they will turn out better because they are not loaded with butter and milk so you won't have to add more flour.
But enough small talk. Let's talk taste. Well, let's just say I've been making these for the past three days! The savory blend of creamy potato with ham, cheese and green onion is classic. And rich--especially topped with a dollop of sour cream. With a simple bowl of soup, they are a meal by themselves. With a fried or poached egg or two, it's a breakfast made in heaven. And I could see these as a great appetizer, for sure. They are also great comfort food for someone not feeling well. They are warm, filling, and go down easy.
For my first batch, I already had all the ingredients on hand, including leftover ham. You could readily use a thick slice or two of deli ham, such as Boar's Head Tavern Ham. Just about any cheese will work. Since I had them on hand, I've used a combo of Fontinella, White Cheddar and a bit of Mozzarella. When I have it, I will use Gruyere. I'm sure Swiss would be great, too--even a smoked Gouda. Just choose a cheese that will melt well.
These are easy to prepare the day before serving and I actually suggest covering and refrigerating the "dough" to let the flavors mix. I prefer to lightly coat them with Panko breadcrumbs which gives just the right amount of crunch to contrast with the soft cake itself or just lightly dusted with flour. If using a cast-iron skillet, watch them closely so they don't scorch. I made large ones for my first batch but found smaller ones much better.
Boil potatoes and then mash using a pastry blender. You should end up with about one cup of mashed potatoes. Season with salt, pepper, several grates of nutmeg and a few shakes of Tabasco. Allow to cool.
Cut ham into small squares and place in mini food processor. Chop/pulse until nicely ground. Grate cheese using large holes on box grater. Chop scallions. Set aside.
Add egg yolk to potato mixture and stir in. Sprinkle in flour one tablespoon at a time and work in with pastry blender. Dough will be soft. Now mix in the ham, cheese, and scallions. If possible, refrigerate for an hour or two. 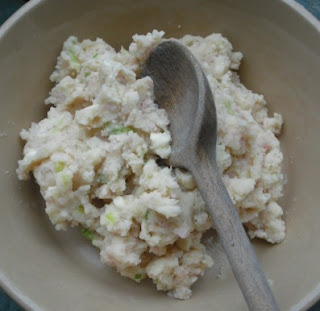 Scoop dough into a 1/4 measuring cup and using your hands form into a 2-1/2 inch patty. They should be at least 1/2-inch thick. Sprinkle lightly with Panko bread crumbs or flour.

Heat oil or oil/butter in a pan and lightly fry until golden brown. Flip. Brown other side.

Drain a bit on paper towel. Sprinkle with several grinds of fresh salt. Plate. Place a few nibs of butter on each along with a dollop of sour cream.
Makes about 6-8 cakes.
*White Lily Flour is readily available here in the South. It is a very soft, powder-like flour. If you don't have access to it, you may use cake flour. If using regular flour, I suggest decreasing amount to 3 tablespoons. I'm not sure that 'self-rising' flour really makes a difference.

Posted by Kitchen Bounty at 8:32 AM