I once found a wad of two-dollar bills in an abandoned field. I was elated. The kind of excitement where you don't breathe for several seconds, your eyes widen, your heart skips a beat or two, and then you take off running to tell everyone. Or anyone. That wad of two-buck wonders came to almost fifty bucks!

Well, that's how I felt the other day in the grocery store. Some of the corned beef was marked way down because they were "close-dated." I was ecstatic! I bought one two-and-a-half pound beauty for $5.20!!! And then another for a little over seven bucks! Wow! Just like "the old days" when food was affordable.

When I taught school, I used the crock pot to cook my corned beef while I was away. It had great flavor but it had a tendency to be overdone and literally fall apart.

I now prefer to simmer a corned beef on top of the stove where I can monitor it just until it is fork tender for nice, non-shredded slices.

Corned beef, like any boiled dinner, is a great summer dish (it will be 86 degrees here today in the South). You don't have to use your oven or heat up a grill outside. And cold, sliced leftovers make great sandwiches. Recently, I purchased an electric hot-plate which I can plug in on the back porch. I love it. I can even use it in the winter. It's a great investment.

I do not particularly like cabbage simmered in the meat water. To me, it comes out greasy. Instead, I prefer to make it separate. I think it tastes much cleaner.


Remove beef from the package. Rinse. Place in Dutch oven large enough to accommodate. If it's a bit of a squeeze, that's okay since the beef will shrink considerably during cooking. If a packet of pickling spice is included, just throw it away. You can buy a container of pickling spice from the grocery store that is ten times better. Sprinkle beef with 1-2 teaspoons of spice. Scatter carrot, onion, celery and garlic around beef. Add water just until it reaches the top of the beef. 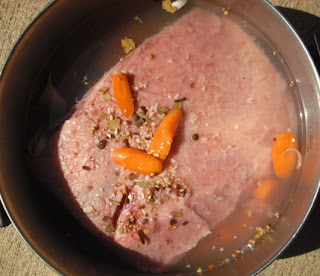 Bring to a slow boil over medium heat. Reduce heat to LOW and simmer, covered, about 45-60 minutes per pound or until the prongs of a carving fork pierce the roast with little resistance.

Turn off heat but keep the corned beef in the pot. Open and rinse the new potatoes. Tuck them around the beef. Cover for about 30 minutes. Remove potatoes to a bowl. Cut into fourths. Dot with butter and a few spoonfuls of the corned beef broth. Sprinkle with salt, pepper and dried parsley (or fresh). Mix together.

Cabbage:  Melt 1-2 tablespoons each of butter and olive oil in a skillet. Add some thin-sliced onion rings that you have cut into half moons. Half a cabbage into thin slices. Add to onion/butter/olive oil mixture. Spoon in a few tablespoons of the corned beef liquid. Cover and steam to your liking. Salt to taste.

Slice the corned beef and serve with potatoes and, if using, the cabbage. Always slice against or in the opposite direction from the grain of the meat. If the beef is a tad overdone and falling apart, slice a bit thicker than you ordinarily would. Serve with spiced mustard and/or horseradish.

I especially enjoy corned beef with buttered Boston brown bread. It is pretty readily available in most grocery stores. It is sold in a can. Some stores shelf it with the baked beans. Some shelf it with bread and muffin mixes. Here's what it looks like: 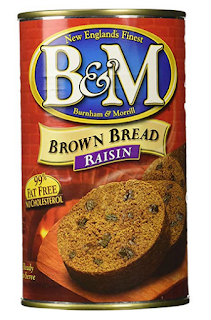 Notes: I think it wise to always plan an extra hour for the corned beef. You can always just let it sit in the braising liquid until ready to serve. Grilled corned-beef sandwiches are great, but don't use the customary Swiss cheese. I use slices of cheddar-horseradish which is wonderful.


I prefer the 'flat-end' cut of corned beef. It is uniform in thickness compared to a 'point-end.' I also like an even layer of fat on it.

Posted by Kitchen Bounty at 6:24 AM