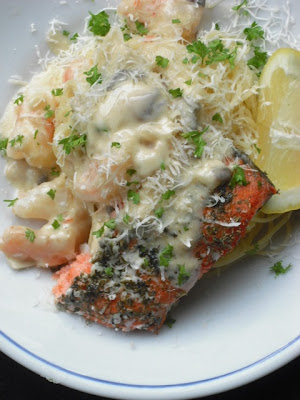 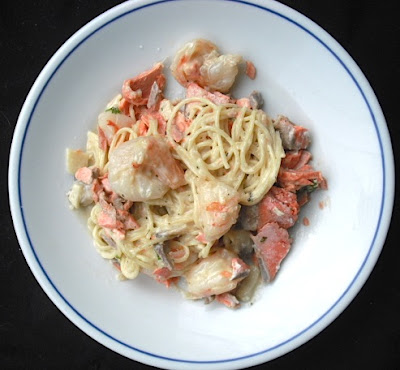 Sometimes in my quest to try something new, I forget something old. And then I re-discover it. That's what happened to this recipe. The last time I made it was several years ago! And I loved it. But I'm older now. More experienced. I looked at the recipe. Studied it. Thought about it . . . "Hmmmm... I think it can be better . . ."

And so that's what I did. I "de-constructed" it. The original called for dumping the sauce (made with cornstarch) with the raw shrimp over the raw salmon and baking it. And I've done that and it was good. BUT . . . but . . . it just seemed so cruel. Why cook a perfectly good sauce twice? And I hate shrimp that is overcooked. It takes only a few minutes in the sauce. I cooked the salmon on its own sprinkled with my beloved fines herbes.* I kept the sauce separate and I ditched serving it over rice as the original recipe called for and used angel hair pasta, instead. When I can find it, I will use lemon/parsley pasta. I also added a dry white wine to the sauce. You just have to have wine in a sauce!

This is a stately dish fit for company but won't cost you a king's ransom like ordered in a fancy restaurant. Don't be afraid of the wine and cream. And, for heaven's sake, don't skip using real cream. It's not going to kill you and it's not like you're guzzling a whole gallon or something. The French love their wine and their cream sauces . . . and they live longer than us!

Have all ingredients cut, sliced and measured before baking the salmon. Have salted water boiling for the pasta. 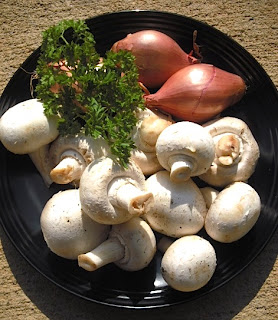 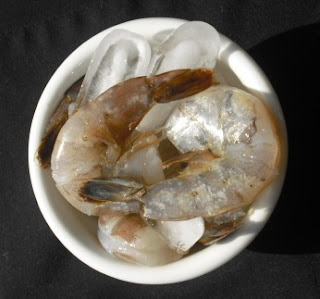 Sprinkle the salmon with a bit of olive oil and then the fines herbes and a few pinches of Kosher salt and a light dusting of garlic powder. Place on a foil-lined pie plate that has been spritzed with Pam and bake for about 15-20 minutes, just until the middle flakes. As it bakes, prepare the sauce. (I usually get a larger piece of salmon so I have leftovers that I add to my morning omelette.)


Saute shallots and mushrooms in one tablespoon of melted butter and one tablespoon of olive oil until tender. Don't let the shallots brown. Add about 2 tablespoons of dry, white wine. Stir until alcohol has evaporated. Remove from heat. Stir in the cream. Add the two cloves of sliced garlic and several twists of pepper from a grinder and pinch of red-pepper flakes. Bring to a slight simmer, stirring occasionally.

As sauce thickens and reduces, add a bit more cream and wine, if necessary, a tablespoon at a time. After about ten minutes, taste and season with salt as needed. If necessary, add the reserved garlic (I usually do). Continue to reduce. The sauce will turn lovely and creamy. When you can scrape a spoon on the bottom of the pan and it leaves a path, the sauce is done. The whole process takes about 15 to 20 minutes. Use a gentle heat. 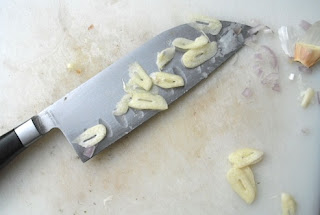 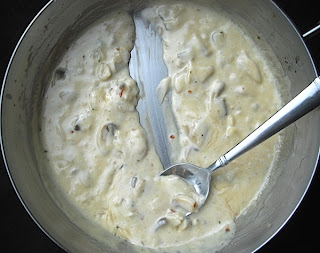 When a path remains after a spoon slides across the pan, the sauce is done.

Remove salmon from oven and cover with a plate. Add pasta to boiling water. Angel-hair pasta will cook in a matter of about 4 minutes. Now add the shrimp to the sauce. As soon as they turn pink, turn over until other side is pink. If the sauce is too thick or you want it a bit more loose, simply add a tablespoon or two of the pasta water. I usually do. Remove pan from heat. 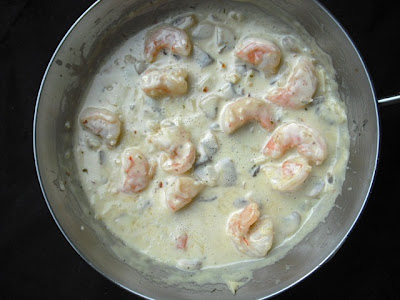 Drain pasta. Mound half on a plate, twisting with a fork. Place half of the salmon fillet leaning against it, trying to keep it whole. If it breaks, just make it "pretty" and don't be alarmed. Now spoon the shrimp and sauce on top. Sprinkle with parsley and grate fresh Parmesan on top.

This will serve two nicely along with a salad. Serve with a cold, dry, white wine. Oooooooo-la-la! Magnifique, mes amours!!! All that's missing is the Eiffel Tower! 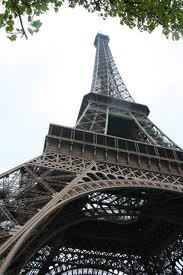 **To sprinkle means to hold the spice about 1.5 feet above the food itself and lightly tap with your finger so it sifts evenly to cover the item.