Okra with Tomatoes and Bacon (with or without Shrimp) 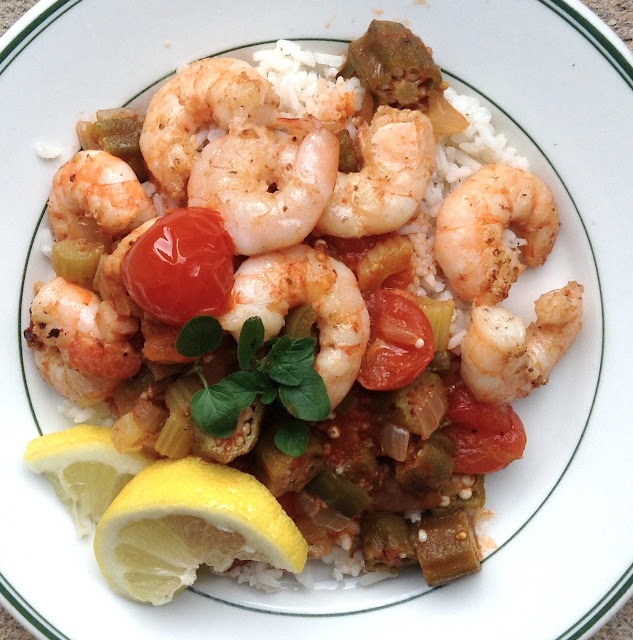 Here in the South, okra is as much an essential kitchen ingredient as collards. Both are readily available in supermarkets and okra is almost always found in loose bulk at local farmers' markets during the summer months and early autumn.

Commonly, okra is simply "stewed" with tomatoes and onions on top of the stove and served over white or brown rice, usually accompanied by sausage or shrimp.

While it is started on the range, it finishes in the oven at a low temperature. The baking times does great things to the okra. For one thing, it gives the stew time to marry all those great flavors. It also gets rid of any "slime" from the okra.

Some people enjoy their okra and tomatoes hot and spicy. While this recipe has a bit of heat, I prefer to let people add their own with a few shakes of Tabasco on top. Tabasco has that kind of nice vinegar base which goes well with this dish.

For this particular recipe, I used 1/2 cup diced, smoked hog jowl (readily available in the South). You may sub 2-3 slices of bacon, which will actually have more flavor (and it won't quite be as much as 1/2 cup).

I suggest grilling the shrimp for added flavor (no grills allowed where I live). Here I've simply sauteed it in a bit of olive oil, bacon grease, and Old Bay's. I finished it off with a bit of white wine and a squeeze of lemon. You can simply give it a quick boil, too, for convenience since the okra packs plenty of tastes to accompany a simply-done shrimp.

Wash okra and drain. Cut off ends and slice into 1/2-rounds. Set aside. Slice cherry tomatoes in half and set aside (you'll have about 2.5-3 cups.)

Put a bit of olive oil in a large stainless-steel pan and add the pork jowl or bacon. When it just begins to sizzle a bit, add the onion, celery, and green pepper. You do not want the bacon to brown but to cook with the vegetables. Saute until soft and most of the bacon has rendered its fat. Now add the garlic and jalapeno and stir for a minute or two. Add the tomatoes and stir. Stand back to admire the beautiful colors. Season with salt and pepper.

Add the tomato sauce. Mix the paste with 1/2 can of water from the empty sauce can and add to mixture. Stir in Okra. Stir in, Old Bay's, smoked paprika, and bay leaves. Cover. Lower heat and allow to simmer for five minutes or so.

Uncover. Taste for seasonings and re-season if necessary.

If your pan is oven safe and has a cover, transfer to oven. Or transfer contents to a lidded casserole dish of appropriate size. I used an earthenware casserole dish with a glazed interior. Avoid cast iron unless it is enameled. Bake for one hour, removing lid for the last 15 minutes. Remove bay leaves. Serve over rice. Pass the Tabasco sauce.

Posted by Kitchen Bounty at 1:49 PM