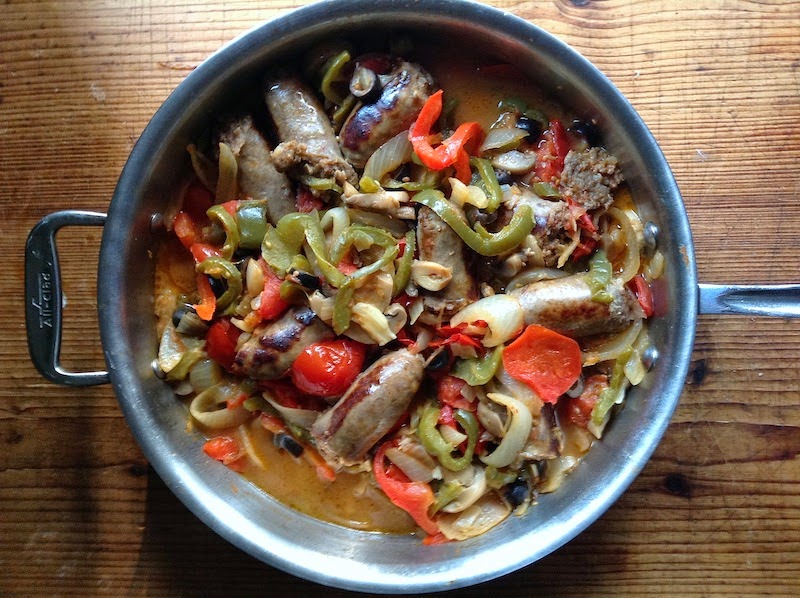 Sausages with peppers and onions couldn't be easier to prepare and it's one of those dishes open to interpretation. Me, I like to add mushrooms and sliced, black olives. As always, use a good Parmesan cheese or something similar. The Campari tomatoes add a fresh note and complement to the this dish without making it "tomato-y."

The simmered peppers and onions lovingly swirl around the seasoned spaghetti, punctuated by the specks of black olives. Don't omit the smoked paprika or smoked chipotle powder. Their smoky, autumnal flavor play nicely against the sweet tomatoes and blend beautifully with the fennel.

(I only serve about half of this recipe, saving the remainder of the sausage/pepper mix for leftovers to serve with another fresh pot of pasta.) 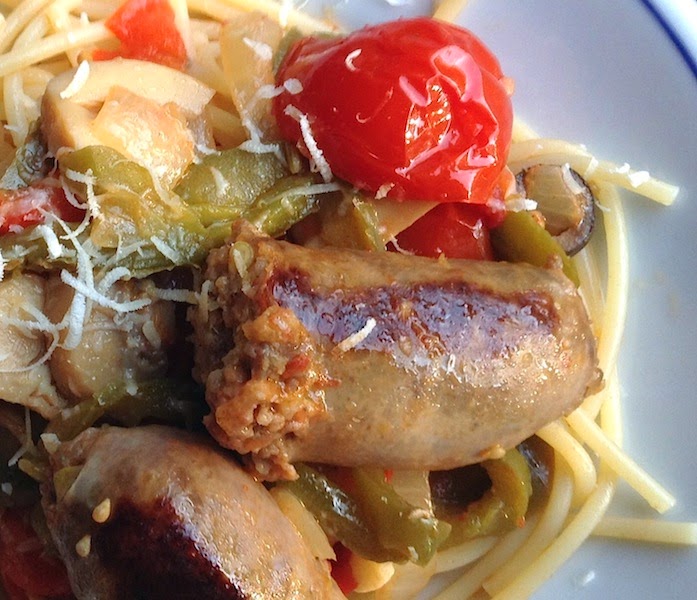 Spritz a large pan with cooking spray and brown the sausages. Remove. (It's not nessary to cook them all the way through since they will simmer on the stove top.)

Add about one tablespoon each of olive oil and butter. Add the peppers, onions, mushrooms and garlic. If using, add, red pepper flakes. Saute just until wilted. Salt and pepper to taste.

Add liquid and scrape up the brown bits from the pan. Add drained and rinsed olives and half of the sliced tomatoes. Sprinkle in the fennel seed. Cut sausages in half and return to pan along with any juices, nestling them down into the pepper/onion mixture. Lightly sprinkle with smoked paprika or smoked chipotle powder. Lightly stir through with a fork. Add a bit more butter, maybe 1-2 tablespoons.

Cover and slow simmer for about 20-30 minutes. If necessary, add a bit more liquid during the cooking time. About half way, sprinkle on some grated Parmesan and lightly mix through.

About 5-10 minutes before you're done cooking, add the rest of the sliced tomatoes (the others will have cooked down). Remove from heat and allow to set while preparing the pasta. 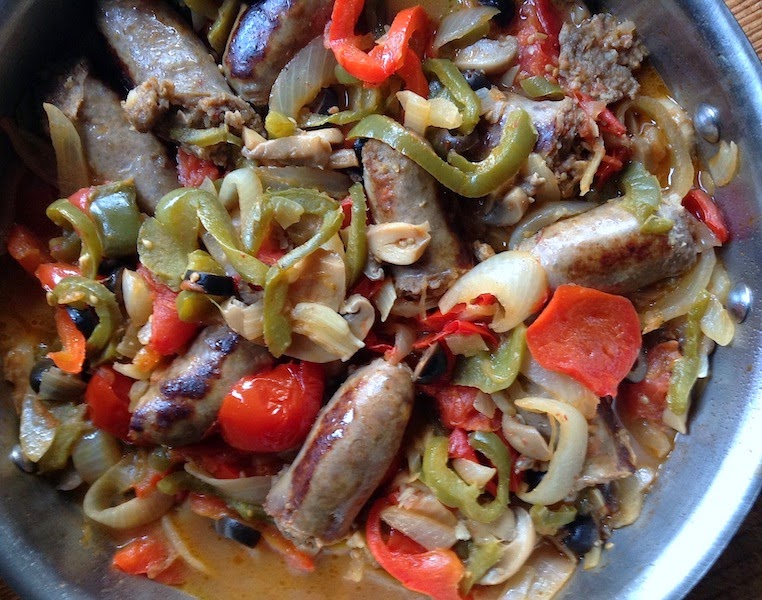 Salt a large pot of water. Add the sliced clove of garlic. When it boils, add your spaghetti. Return to the boil, lower heat a bit, and cook according to directions. When done, remove about 1/2 cup of the water and drain. Don't worry about saving the sliced garlic, it has already flavored the water and the pasta.

Return pasta to the pot. Carefully tilt the sausage/pepper mixture pan over the pasta to drain one-half of the juices into the pasta. Stir. Season with salt and pepper and 2-4 tablespoons fresh-grated Parmesan. Allow to sit for a bit so pasta can absorb the sauce. Add a bit of the pasta water to the pan with pepper/sausage mixture if you think it too dry.

To plate: Mound spaghetti on a plate. Top with pepper/onion mixture. Drizzle on a bit more liquid and lean two sausage halves against the pasta. Grate with a bit more Parmesan. 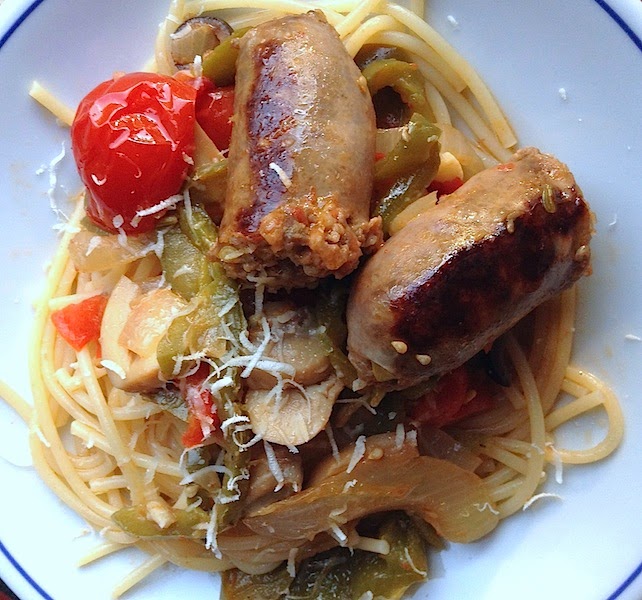 Notes: If you didn't want to serve this over pasta, omit most of the liquid, keep it a bit on the dry side and don't cut the sausages in half. Serve on crusty buns topped with Provolone lightly melted in the oven or under a broiler.

*I added most of my tomatoes at the beginning of the cooking process. You may do so, too. But I now prefer adding only half and the remainder towards the end so they hold their shape.

Posted by Kitchen Bounty at 7:30 AM