Regrettably, here in the States, unlike Europe, we do not eat each much lamb. Here, beef is king! That is unfortunate. Today's lamb, unlike tough mutton of years past, is mild in taste ... and tender. Today's lamb needs no mint to mask its once-assertive muttony taste!

In the States, lamb is prevalent during Easter, but pretty scarce the remainder of the year. Usually, most expensive cuts, like lamb chops show up but they are ridicuosly priced. Even more expensive than steak! An entire leg of lamb ...  Yikes ... I have never seen an entire leg of lamb where I shop here in the South. No. Not. Ever.

I especially love when it grilled and I love it a bit on the rare side with a squeeze of lemon. Lots and lots of garlic and rosemary! Juicy crispy fat!

Leftover lamb warmed up is just so-so. Maybe some gravy and a side or two. Kind of boring. Hmmm ... what to do?

SO,  I came up with these super-easy, open-faced sandwiches. How good were they? Well, let's just say that next time I roast lamb, I will make sure I have a lot extra!

For two days I debated what kind of cheese to use. ... Blue? Roquefort? Feta? All would be great. Finally, I settled on a dill Havarti for its warm melting qualities. I used a block rather than slices. The dill complements the tzatzki sauce. Tzatzki is now readily found in most supermarkets in the deli section.

This is not really a recipe .... just a process ... I imagine one could also use ham, even chicken!

I baked mine directly on the rack in a toaster oven set on the "bagel" setting until the cheese was lovingly melting and just beginning to drip. Maybe 10 minutes! In a traditional oven, I would bake at around 350 F on a cookie sheet until the cheese begins to melt.

I recommend a block of cheese because you can slice it thick and it will take longer to melt than thin slices and allow lamb to warm through. 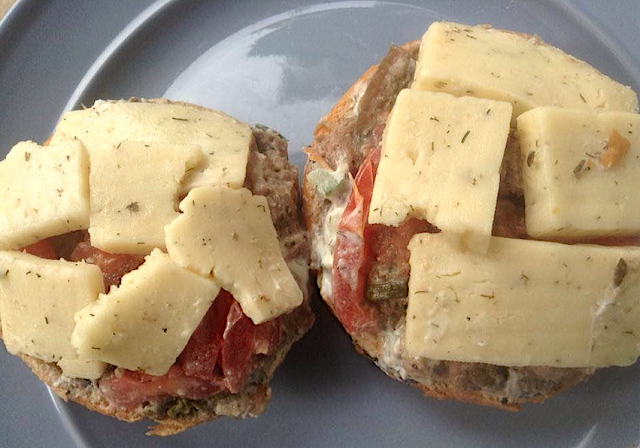 Cut tomato in half horizontally. Squeeze out juice and seeds. Cut into thin slices.

Spread about 2 tablespoons tzatzki sauce over each half of the roll. Place a few of the razor-thin onion slices on top. Arrange lamb, as much as you like, for the next layer.  Place tomatoes on top and crown with cheese.

Bake, according to instructions set above!

Posted by Kitchen Bounty at 1:07 PM