Tender egg-pasta enclose savory ground meat spiced with onion, garlic and parsley. Boiled, they are served in a butter sauce with a side of boiled cabbage.

It has been a matter of speculation most of my life about any "jewish heritage" on my mother's side of the family. Growing up, I was often asked if I were Jewish as was my younger sister. I think it's my swarthy complexion and sexy lips! Or so I was told.
There are family stories of my great, great grandfather talking with brethern on synogogue steps and somewhere along the way there is someone's birth certificate with the surname of "Jacobs." Be that as it may, and even though we were raised as devout Catholics, it just may be my family's culinary heritage that provides the most telling evidence. We grew up on kreplach and latkes, but we called them "dumplings" and "potato pancakes." Those two words alone are enough to send any family member into a salivating swoon, regardless of religious affiliation. Or pouty lips.
﻿Kreplach is labor intensive. I won't lie about that. But if you have an extra pair of hands or two, the work goes quickly. And they freeze beautifully, so always make extra. A food processor makes easy work of preparing the dough. My grandmother used to heap the flour on the counter and make a well in the center for the eggs and water. It was always quite a mess, and clean up was horrible, which included each and every finger! With the processor, you actually get a better dough, I think. And you can easily prepare the meat the night before, which I often do to give it better flavor.
Basic Kreplach Dough Recipe
Place flour and salt in processor. Pulse. Add egg yolks and pulse until fine. Add olive oil and pulse. With motor running and lid on, dribble the tepid water through the holes in the lid of the processor. When dough leaves the sides of the processor, it is done. You may need to add a tablespoon or more of water, but always add just a dribble at a time. Remove to a lightly-floured surface and knead just a few times. If the dough seems a bit wet, knead in a bit more flour. (It's better to have the dough too wet than too dry.)
Cover dough with a piece of plastic wrap, towel, or bowl and let rest for 30 minutes. Do not attempt to roll out the dough until it has rested. Do not use paper towel, waxed paper or tinfoil to cover dough as they will end up sticking to the dough.
After 30 minutes, the dough will be soft and pliable. Flour a surface and begin rolling out the dough into a circle. I go thin. Think noodle. Using a 3-inch cutter, begin cutting out circles. Save the scraps of dough and re-roll. You should end up with about 20 circles.

Kreplach Meat Filling
Mix all ingredients together. It's important to have a fine dice on the onion since the meatballs are rather small. I often cheat and just add dried onion flakes, garlic powder and dried parsley flakes. Form into small "meatballs." You are looking for about 20.
Bring a large pot of salted water to a rolling boil.
Place one meatball off center in one of your cut circles of dough being careful to place it on the opposite side that has been floured. Fold over and seal edges. Place on a floured surface until are done. Leftover meat can simply be added to the pot of boiling water along with scraps of leftover dough.
Carefully place the kreplach in the boiling water being careful not to overcrowd too much. Stir once so none stick to bottom of pan. Place on lid and return to the boil, keeping an eye on the pot so it doesn't boil over. Boil for about ten minutes. You know they will be done when the center puffs up from steam ( a reason to keep the lid on, not off).
Using a slotted spoon, remove to a large bowl. Ladle in a bit of the water and several tablespoons of butter. Add salt and pepper. Cover with a plate and allow to sit for about five minutes or so. Traditionally, my family always served this with a side of boiled cabbage. Remember, pasta can take a lot of salt. I like to serve with a side of sour cream.
NOTES
*My grandmother never used olive oil in her dough, but it makes for a much more tender dough. When I told her I added it, she grabbed me by the arm and exclaimed, "You improved it!"
TO FREEZE: place uncooked dumplings on a baking sheet and place in freezer. When frozen, put into plastic bags. To cook, simply put frozen into boiling water and cook per above instructions, adding about 5 minutes or so.
TO ADD TO SOUP: These are wonderful added to chicken or turkey soup. I never cook them in the soup, though, since the raw dough and flour compromises the taste of the stock. Cook separately in a pot of water and then add to soup. 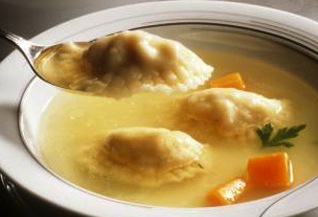 If you are making several batches of kreplach, a latex glove helps. Mound the meat in the palm of your hand and gently squeeze out each meatball. It makes fast work of it. 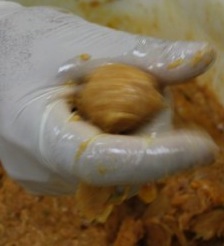 I always intend to fry leftover kreplach, but there never are any. I would like to sautee them in a sage/butter sauce. 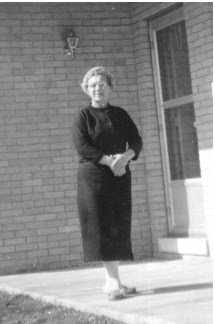 Posted by Kitchen Bounty at 9:34 AM

Yummy sounding! (Copied the recipe.)Love your new page set-up too!