De-boning a chicken leg is really quite simple. Having a sharp knife is essential even though you do more "scraping and pulling" than actual cutting. Stuffing it is even more fun. For this recipe, I simply used Italian sausage, but you could use a bread or apple stuffing as well. Soon, I'll try a potato stuffing. The first time I made this, I had some bottled Alfredo sauce on hand, which I used instead of the Bechamel sauce. You can go that route. Or you can add a bit of stock to the pan before baking to give you some gravy juices. I've done that, too. I prefer the Bechamel. It's really not difficult to make and the taste and texture beats anything you can get in a jar.

Look for large drumsticks. Processors simply cut through the bone that joins it to the thigh. That's unfortunate since you won't get a flap of skin on the underside which makes for a neat fold.

1. Wash and dry your drumsticks. Begin by cutting/scraping around the top to loosen it from the bone and joint. This is the most "complicated" part of the task. 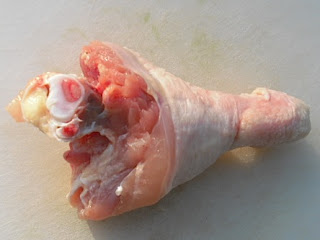 2. Holding your knife at an angle, scrape downwards or,  using your fingers, begin pulling the meat downwards. It will release pretty easily: 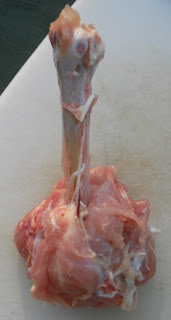 3. Grab the "ball" of meat and simply pull. You may need to make a small cut or two at the base to release it from the base of the bone: 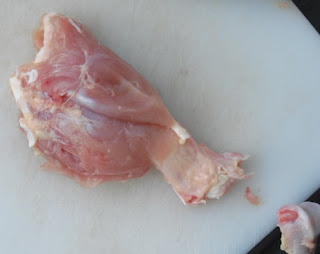 4. Now simply turn the inside-out drumstick right-side in. Below is the completed, boneless leg, backside and front. 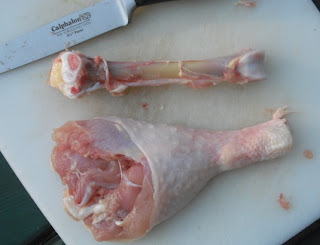 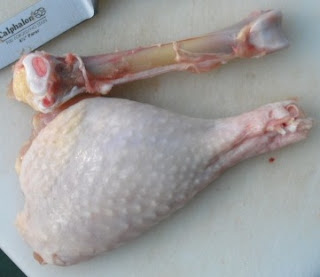 Remove sausage from casings. Divide into 4-5 parts and stuff it into each chicken leg being sure to fill the "handle" of the drumstick. Also be sure to push the meat of the leg back into place as you go. 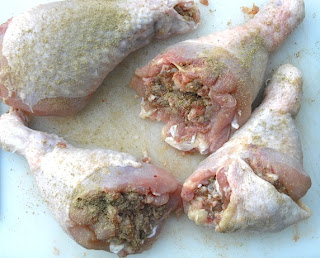 Notice the leg in the lower right-hand corner. It still had some skin from the thigh so I was able to neatly fold it over.

Pull skin over legs and shape and plump to make them look nice.

Slice an onion into rings and place in the bottom of a baking dish/pan. Drizzle with a bit of olive oil and toss to coat. Neatly arrange stuffed chicken legs on top, meat side up.

Bake at 375 F degrees for 15 minutes. This will firm the stuffing. Remove from oven and turn skin-side up. Melt a bit of butter on each leg and return to oven. Raise temperature to 425 and bake for another 20 minutes, basting once with pan juices.

Remove and allow to cool while preparing the sauce:

In a small saucepan, melt the butter. Add the onions and cook until soft (I had some mushrooms on hand, so I added them, too). When soft, add the garlic and swirl until fragrant. Add the flour. It will turn into a paste. Cook for several minutes while stirring constantly. Begin adding the liquid a little at a time and whisking to avoid lumps until liquid is used and sauce has thickened. Remove from heat. Add several grates of fresh nutmeg. Stir. Stir in cheese until melted. Taste for seasoning. If sauce thickens too much before serving, just add a bit more liquid.

To serve: place a few spoonfuls of sauce on plate followed by some of the onions and then a stuffed chicken leg.

NOTES: Never add liquid to a glass baking dish that is hot. It will shatter. Add liquid before placing it in the oven. If desired, cut away the tendons from chicken leg.

I think it would be interesting to replace the bone with a mozzarella stick wrapped in ham or proscuitto. I used just a splash of brandy on the legs when I put them in the oven.

Posted by Kitchen Bounty at 6:51 AM