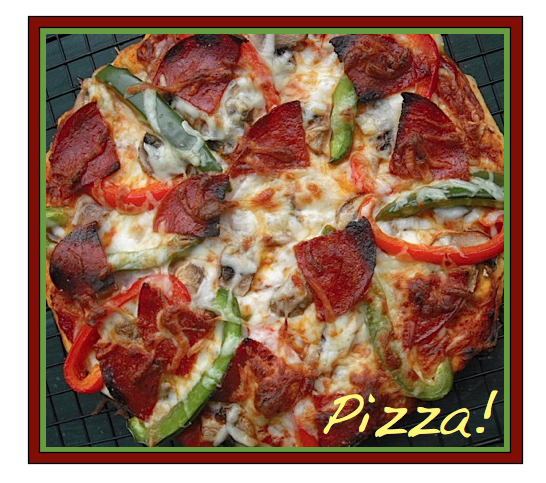 Each time I make pizza, I'm reminded of its total beauty. It's a food we devour with our eyes! I mean, just focus on that photograph. Bubbly, browned cheese with fresh mushrooms peeking up. Pepperoni tinged crisp. And, oh, the peppers. Not the diced, masticated kind from a take-out joint. Real peppers. Baked tender crisp. I like to pick them off and slither them into my opened mouth. 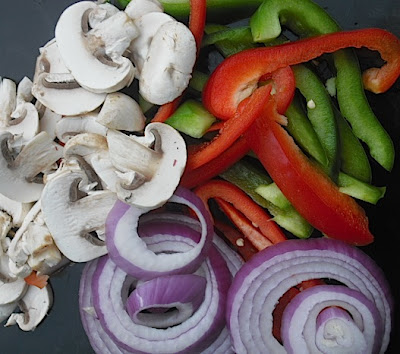 Color, shape, texture--pizza has it all! It's an almost magical dish. We assemble it then watch as it literally melts into deliciousness. Like a painting, it begins with a clean canvas or dough. We brush it with tomato sauce. Add some splotches of mushroom and pepper. Build it up, all Jackson Pollack-like.

It's a round food. I like round. Doughnuts. Pies. Cakes. Our Planet. And it's easy and quick to prepare.

Three mistakes usually made with pizza? First is the cheese. Never use just mozzarella. Sure, it's a fun cheese...all that goo and stringiness. But it really doesn't pack a ton of taste. Use cheeses that do, such as Parmesan, Gruyere, or buy a blend of Italian cheeses now readily available in the grocery store and already shredded. Lately, I've been using a cheese by Stella simply called Italian. It's a cross between a Parm. and a Cheddar. Or use a good Gouda. Or a smoked mozzarella. It's up to you.

But whatever you do, go easy on the cheese. More cheese doesn't necessarily make a pizza better. But it will make it greasier and soggier. Less is more.

Next, after baking, allow the pizza to rest. You will taste more of the flavors you added to the pizza when it's not piping hot. And there's nothing worse than a tongue burn from scalding, hot melted cheese. 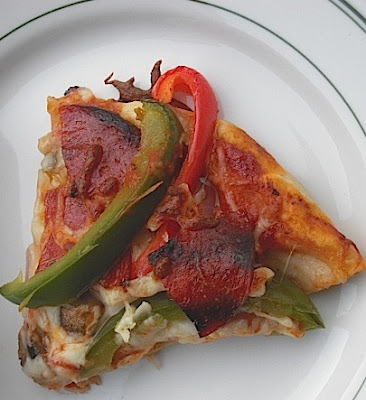 Most grocery stores now carry balls of fresh pizza dough. It's what I use. Pizza dough is not forgiving. It is elastic and snaps back like a sassy mouth. Work with it. I find that stretching it out with the heel of my hand works best. I've never had it stick to the bottom of my pan.

I also use deli pepperoni and have them cut it a bit thicker than normal. I then cut each slice into quarters.

Really, I love pizza because it allows me to clean out my fridge and to use up all those heels of cheese I have packaged away. The other day I made an asparagus pizza using leftover spears, deli ham and goat cheese. 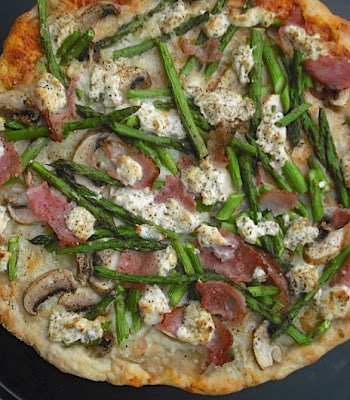 Use toppings you enjoy. Jalapenos is you like it spicy. Fresh tomatoes. Basil. Everyone loves pizza! That's amore!

Using about 2/3 of the pizza dough, begin stretching it into a 9 or 10-inch circle. Use the heel of your hand to push dough outward. (My dough does not stick to my pan so I do not oil or spray it.) The edges will be thicker (a good thing) than the center. 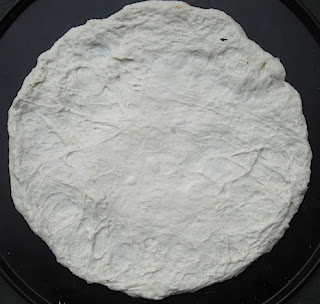 Spread sauce evenly over the pizza dough. Less is more. Don't drown it or you will end up with a soggy pizza. (I have pre-baked the pizza dough several minutes to form a crust before adding the sauce, but I really found no real difference.) Scatter the thinly-sliced garlic over the sauce. If using, sprinkle with a bit of crushed fennel seed and/or red pepper flakes.

Add the onion. Here I used circles, more for visual drama, but I really prefer them cut up. 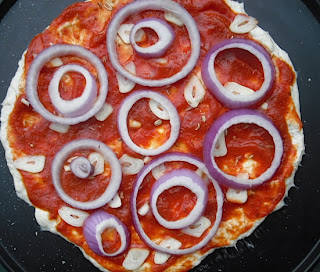 Now add an even layer of mozzarella and begin layering your veggies. 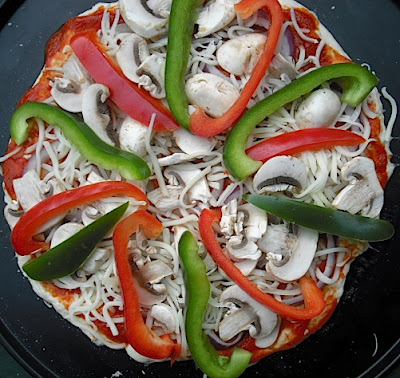 Sprinkle with your blend of Italian cheeses. Top with pepperoni and then a final grating of cheese.

Bake for about ten minutes. Carefully slide the pizza off of the pan and directly onto the oven rack. This will ensure a crisp crust. Bake for another ten minutes. Remove from oven and allow to rest on a wire rack. The wire rack will prevent the crust from becoming moist and soggy from steam. 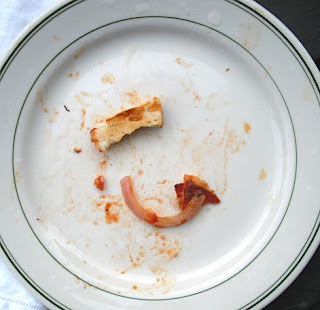 (Don't judge me, but I love pizza with a glass of Manischewitz over ice. And sometimes I add diet Pepsi to it.)

Posted by Kitchen Bounty at 5:42 AM