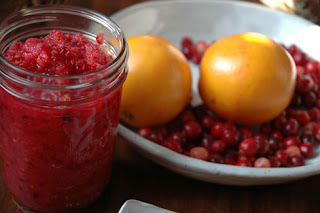 Even people who don't like cranberry relish gobble this up. At its best, it should be prepared several weeks ahead so the sugar "cooks" the relish. It lasts forever in the refrigerator and becomes better with age. I am just now finishing up the last bit I made from last winter. For whatever reason, fresh cranberries disappear from produce shelves way too early. So, plan ahead. Make triple recipes.

I really owe the success of this recipe to being raised a Catholic. I attended Catholic school for 12 years. When I was in the seventh grade, we moved to a much smaller town than the one in which I was raised. My school shrunk into a four-room, two-story brick building constructed in 1900. It was considered "modern" for its time and housed a bell tower complete with attic. I loved that old school. Sadly, it was demolished to make room for an even more "modern" one. No comparison.
One Saturday in autumn, on my Schwin bicycle, I delivered several paper bags of  natural peat moss from a rotting log I had discovered in the woods to the convent to improve the soil for planting spring bulbs. Mind you, the "convent" was an old house. Vintage. The school was on one side. The convent, rectory and church were on the other. In between was a large, historic cemetery. For a kid, it was all pretty cool.
The back door was off of a porch/pantry. The doorbell was very old-fashioned. It was a real bell you turned or twisted from the outside.  I could hear laughter inside, but no one answered. After several turns of the bell (it was fun), finally, Sister Jerome showed up. She was the "principal" of the school. Wearing an apron I had never seen on any nun, she was all smiles and jovial. She explained she and the rest of the Sisters were attempting to make cranberry relish. When they put the berries in the mill to grind, they squirted all over them. Hence, the laughter.
In a way, I felt kind of special to be included.  Great. Sister Jerome inspected what I had called "peat moss" and had me sprinkle it over the borders. It was a love/hate relationship with that nun. But, looking back, I think she was the one who had a love/hate relationship with herself. My understanding is that she left the convent. Probably. She was too gifted to be confined by a manual doorbell. And to be named after a male.
So, flash forward ... The first time I attempted to make cranberry relish was when I myself was a young teacher. I thought it would be easy and fun like the Sisters at my school.
Wrong!
It was so horrible and bitter I dared not bring it home for Thanksgiving. But, I hated to throw it away since it took so much work to chop chop chop ... so I kept it in the fridge and just kind of added more sugar, day by day, tasting after each addition. Then, one day, a miracle happened. The heavens opened! It was ideal and just kind of turned into a lovely "jam." It was absolutely delicious without any bitterness. Hallelujah! Long story short,  I brought it home for Christmas and it was an instant hit and has become a family favorite and staple at our holiday table.
One holiday when I wasn't home for the holidays, I had to actually send a quart by express mail!
I dare you not to make this. I double dare you not to make this. I triple dare you not to make this. Just do it. Heaven wants to shine on you and your family and your feast. Cmon. You can do it. Really. It's too easy not to ...
Carefully go over cranberries and remove old shriveled ones. Cut one orange into smaller sections (including the peel) and remove seeds if necessary. Place some berries and orange sections in food processor or mini prep and pulse/grind. Remember, this is a relish, so don't over grind into a puree. Remove to large bowl. Sometimes I add a bit more juice from another orange if mixture seems too dry. If the orange is bland, I sometimes add a bit more zest from the second orange. Add 1-2 cups of sugar. Cover and place in refrigerator.

For the next several days, add 1/2 cup sugar at a time and stir. In total, you will probably use about 2 pounds of sugar or 4 cups. By the fifth day or so the flavors will really begin to blend and you should be able to just taste a bit of orange. After about a week, it will have "jellied" and you are in cranberry Nirvana.

This is the perfect side to anything savory or bland. Of course, it's wonderful with stuffing. I love it with kreplach. Put in small jars, it makes for a much-appreciated gift. 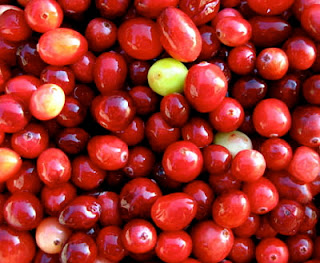 Notes: Last year I just dumped all the sugar into a bowl with the processed berries and oranges and then stirred at least once a day for a week or so.  It was just fine! The thrill of dumping in a 4 pound bag of sugar is worth it!

Posted by Kitchen Bounty at 6:38 AM

I make this same recipe with only 3/4 cup of sugar. I make about 4 days ahead of when I want to serve it. I use a food processor until it is just shy of the consistency of applesauce, and then let it 'mellow' in the frige.