When I had my art studio in Michigan, I became friends with the Whites from St. Louis who often visited twice a year. Some summers, they'd arrive with their son, Chuck, who loved to cook, and his family. Being invited over for dinner was always a treat. It's there that I first had this wonderful pie which was served as a side to barbecued lamb. Those are fond memories, indeed.

This is classic Italian fare and the original recipe can be found in The Silver Spoon cookbook, the culinary bible of all things Italian. With a salad it's a great dinner that goes well with wine, red or white. I often just like a cold glass of milk.

The original recipe calls for "batons" of potato. To make batons, cut off the ends and sides of the potato until it is square. Then cut into 1/4-inch slices and then cut those into 1/4-inch "batons" or "fries" about two-and-one-half inches long. I've also just roughly chopped the potato. But don't use round "slices" since the bacon and onion just doesn't incorporate as well. Having done all three, I prefer the batons. 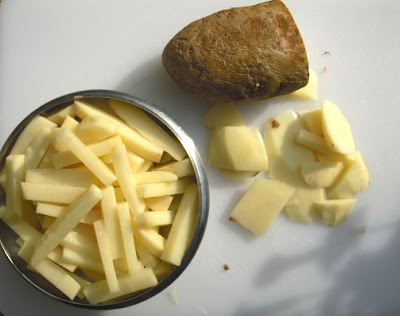 I like to remove much of the fat from the bacon. Ironically, this is easier if you buy an inferior or less expensive brand of bacon because it usually has a ton of fat that simply pulls away from the bacon meat itself. A good bacon will be "marbled" with fat and it's more difficult to separate. And don't use a "sweet" bacon. You want one that is naturally smoked. I suspect that in Italy, they would have used pancetta.

I bake mine in an 8 or 9-inch enamel-lined, cast-iron skillet. The original recipe calls for a "roast pan," more likely a shallow metal pan. I've also used a black heavy metal pie plate. (A heavy Pyrex dish will work, too, but you may want to bake 25 degrees lower and for less time if using glass, but the final result will not be as "crispy.")

I also throw in a bit of minced fresh rosemary and thyme when I have it on hand. When I don't, I sometimes add a few splashes of Tabasco. Go easy on the salt, since the bacon has quite a bit, and you can always salt the slices later. Use a quality pepper.

In a large bowl, mix the uncooked, chopped bacon and onion. Add the potato batons and, if using, minced fresh herbs. Mix well, taking care to incorporate bacon throughout. Sprinkle with flour and mix. 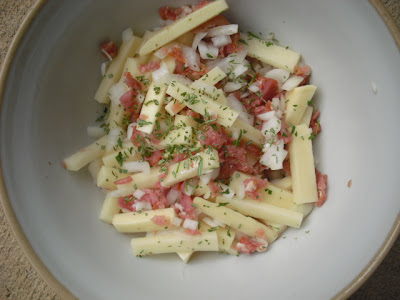 In a small bowl, beat the eggs and milk and/or cream with "a little salt and pepper." I use more pepper than salt.

Add egg mixture to potato-bacon-onion mixture and stir until combined.

Melt butter in pan until it begins to brown. (Here's what I do--I put the butter in the pan and then put the pan in the oven as I pre-heat it and leave it there while I prep the rest of the ingredients. By the time I'm done, the butter is where I want it. If it browns too fast, just remove from oven.)

Add mixture to hot pan with butter. Smooth the surface. Bake for 45 minutes. Remove. Allow to sit at least 15-20 minutes before serving. Spoon sour cream on the side of each portion. 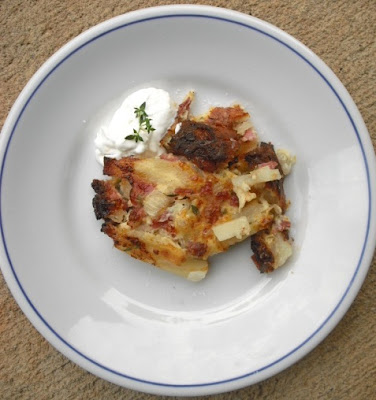 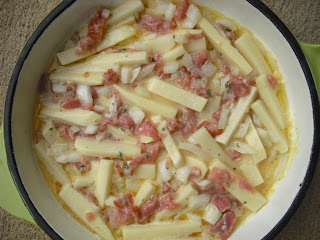 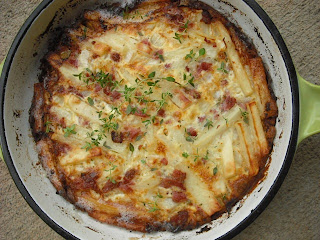 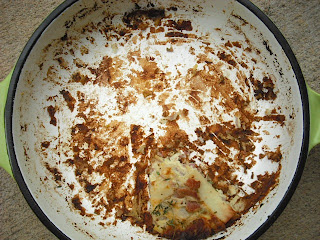 If possible, save a slice for your morning breakfast.

Posted by Kitchen Bounty at 5:41 AM

Do you cook the bacon before adding it?

Did you read the recipe? It's pretty clear.