Whenever my grandmother babysat, we were guaranteed two foods: potato pancakes (latkes) and dumplings (Kreplach). To this day, nothing instills greater excitement in my family than the promise of those two foods. Our tongues literally quiver in anticipation. As Catholics, potato pancakes were a given on Friday, the day of no meat. They were certainly economical, but time-consuming in their preparation. My mother labored with a mountain of potatoes to grate.

I deviate from my mother's and grandmother's recipe in three ways: I drain the potatoes after shredding which allows them to cook quicker and crisper and less mushy in the center. I fry them in peanut oil. My mother and grandmother got out the can of Crisco and melted great mounds of the white stuff. I've also used olive oil, but peanut oil can withstand high temperatures without burning. I also now use two grates: one small and one large with is more visually appealing and which gives a really great "crunch" to the outer edges.

Sorry, but a blender of food processor just doesn't cut it when grating potatoes for latkes. It's a labor of love and best done by hand. The small holes on a box grater are too small and will result in a mush. You want about five grating holes to an inch.

With a salad and a side of fruit, these can be a meal in themselves. Traditionally, they are served with sour cream or applesauce. They go well with just about any wine, but I still prefer a tall, cold glass of milk. They also go well with smoked sausages or leftover ham. I just love them with butter and salt. My mother loved them with cottage cheese. 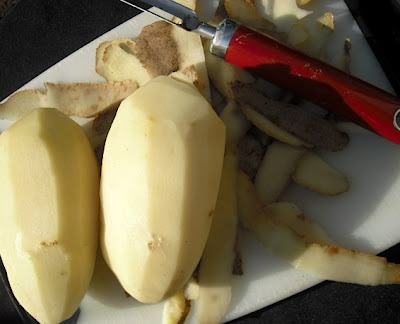 Preheat oven to 200 degrees F. (warm) and line a baking sheet with foil.

Add peanut oil to a heavy frying pan (I use a cast-iron pan) at least 1/4 inch in depth. The oil does not need to cover the potatoes when frying. Turn heat to low-medium to begin to heat it up and keep an eye on it.

Transfer potato mixture into a seive and jiggle out most, but not all, of the potato juice, pressing down a bit. Save the juice and allow it to rest.


Place drained mixture into a bowl and add the slightly beaten egg, flour, salt and pepper.

Gently drain the potato liquid being careful to leave behind the white potato starch which will have settled to the bottom. Add starch to potato mixture and mix through. 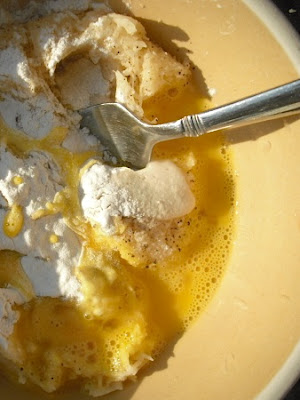 Raise heat on oil and when shimmering, add forkful of potato mixture forming in a round and pressing down a bit. Do not overcrowd the pan. When edges begin to turn brown, flip and fry other side. DO NOT WALK AWAY from frying the pancakes. They can burn suddenly and easily. You will have to adjust heat as you fry.


When golden brown, remove to drain and then place on baking sheet in oven to keep warm while preparing subsequent batches.

If you've never had these, congratulations. You're now an addict!

Posted by Kitchen Bounty at 2:18 PM

Gary
These look so yummy - Do you take your own photos? they are marvelous!

Gary
These look so yummy - Do you take your own photos? they are marvelous!